The Venn diagram below shows the relative popularity of PC/Laptop (85%), Server (30%), and Cloud platforms (24%), and also the overlaps.
Interestingly, PC remains the most popular platform for data mining and analytics work, although a significant part is also done in the cloud and on a server. 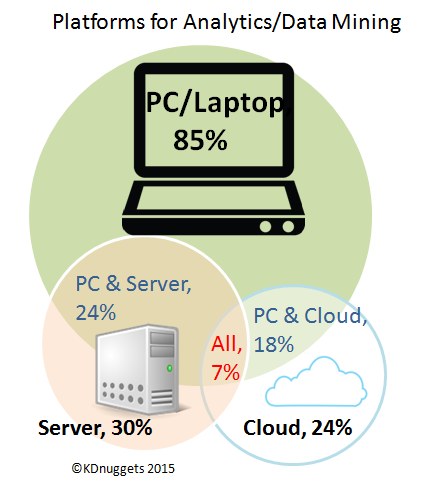 The average data miner in this poll used 1.4 platforms.
54% used only PC/laptop, 9% used only dept server, and 5% only the cloud.

Among those that used cloud computing, 59% of them used private cloud, 46% used public cloud, and 6% used both.

Next poll question was on processing power.

Median number of cores is 3-4
Although my note on the poll said "if you have 8-core processor but your job only uses 1, choose 1", I suspect most voters ignored this, since the most common answer is 3-4 cores which probably corresponds to the number of cores in the CPU (many popular laptops/PCs now have 4 cores), but I doubt that data mining jobs are so well parallelized that they actually use all 4 cores.

Comparing with a similar poll 2010 KDnuggets poll: Computer configuration for your main Analytics / Data Mining machine, we see that the median number of cores only doubled, to 3-4 in 2015 from 2 in 2010.

Next poll question was on memory.


Median memory size is in 5-16 GB range (say 8GB), also double the amount in 2010 Computer configuration poll, which was 3GB. 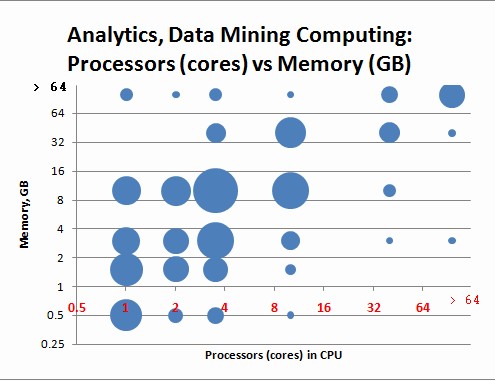 Next poll question was on operating system.


The Average number of operating systems used was only 1.2, and 67% of users only used one OS. 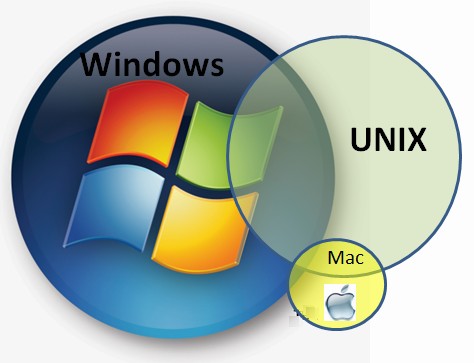