)
Life insurers are testing an intensely personal new use for the vast dossiers of data being amassed about Americans: predicting people's longevity.

Life insurers are testing an intensely personal new use for the vast dossiers of data being amassed about Americans: predicting people's longevity. 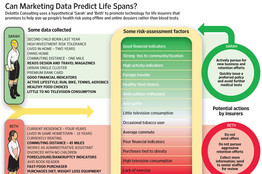 Insurers have long used blood and urine tests to assess people's health-a costly process. Today, however, data-gathering companies have such extensive files on most U.S. consumers-online shopping details, catalog purchases, magazine subscriptions, leisure activities and information from social-networking sites-that some insurers are exploring whether data can reveal nearly as much about a person as a lab analysis of their bodily fluids.

In one of the biggest tests, the U.S. arm of British insurer Aviva PLC looked at 60,000 recent insurance applicants. It found that a new, "predictive modeling" system, based partly on consumer-marketing data, was "persuasive" in its ability to mimic traditional techniques.

The research heralds a remarkable expansion of the use of consumer-marketing data, which is traditionally used for advertising purposes.

This data increasingly is gathered online, often with consumers only vaguely aware that separate bits of information about them are being collected and collated in ways that can be surprisingly revealing. The growing trade in personal information is the subject of a Wall Street Journal investigation into online privacy.

A key part of the Aviva test, run by Deloitte Consulting LLP, was estimating a person's risk for illnesses such as high blood pressure and depression. Deloitte's models assume that many diseases relate to lifestyle factors such as exercise habits and fast-food diets.

This kind of analysis, proponents argue, could lower insurance costs and eliminate an off-putting aspect of the insurance sale for some people.