)
Is it a useful rebranding of analytics or a statistician who lives in select regions of california or works at bitly?

data scientist: a statistician who lives in select regions of california or works at bitly

Ever since the term "Data Scientist" was coined by DJ Patil and Jeff Hammerbacker in 2009, there's been a vigorous debate on what the team actually means. More than 80% of statisticians consider themselves data scientists, but Data Science is more than just Statistics. (My own take is that Data Science is a valuable rebranding of computer science and applied statistics skills.) 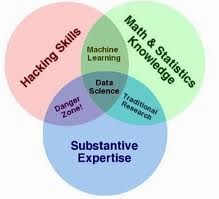 To help bring clarity to the issue, Data Scientist and R user Harlan Harris has published a great presentation he gave at the Data Science DC meetup group, What is Data Science anyway?. The presentation recaps the key data science discussions over the last few years, from Hal Varian ("the sexy job in the next 10 years will be Statistics"), Mike Driscoll ("sexy skills of data geeks"), Nathan Yau ("data scientists: people who can do it all"), Mike Loukides ("Data science enables the creation of data products"), Hilary Mason ("Data science is clearly a blend of the hackers"), Drew Conway ("The Data Science Venn Diagram") and many others.

One thing that seems certain: Data Science is here to stay. Companies are clamoring to hire people with data science skills, and the excitement at data science events like the recent Strata conference in New York is palpable. (This review of the conference even says that "Data Scientists are the new rock stars of the technology world.")

I agree with David Smith: I think Data Science is a rebranding of Analytics/Data Mining skills. How come the Wikipedia page for Data Science still does not exist ?!