)
This year poll received twice as many votes as in 2011. US, AU/NZ and West Europe lead in salaries, and we see a significant number of self-employed analytics professionals doing very well.

What is your annual salary/income range (in USD) and employment ?

This year the poll received about 500 votes - twice as many as in 2011, so the direct income comparison with 2011 may not be valid. For example, the lower avg. salary in Asia in 2012 may be due to much higher partication from Asia, so 2012 result is probably more representative.
However, we see that US, AU/NZ and West Europe still lead in salaries, and we also see high compensation in Middle East (which did not get enough votes in 2011 to be included).

Also, we see growth in the number of self-employed analytics professionals, with high compensations for them. Here are more detailed results.


Here is the breakdown of the salary/income by brackets, excluding students and unemployed, and grouping smaller Government with a larger and similar (in terms of salaries) Academic employment group. 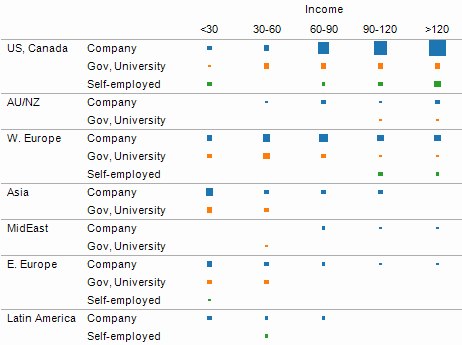 We can see a lot of US/Canada analytics professionals with salaries over 120 (largest box in upper corner) who may have a much higher income which is not reflected in this graph. Next poll will include additional higher income brackets.

If we approximate the salary using a midpoint of the range and use $20K for the lowest and $150K for the highest range, we get the following average salary. Here bar height represents the number of people in that region/employment type. 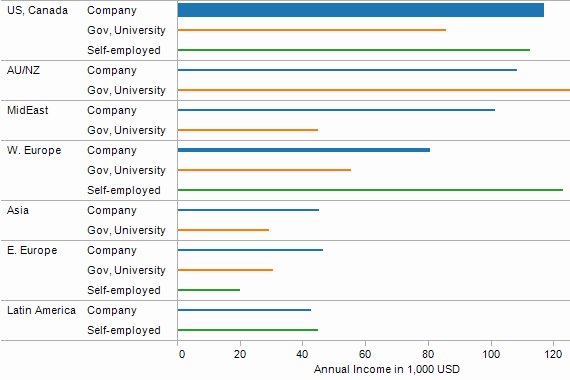 For comparison, here are the results for
2011 KDnuggets Poll: Analytics/Data Mining Income/Salary by Region.