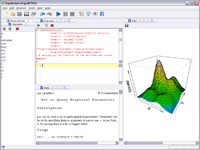 The following video shows how easy R models and scripts can be integrated into the RapidMiner analysis processes. RapidMiner offers a new R perspective consisting of the known R console together with the great plotting facilities of R. All variables as well as R scripts can be stored in the RapidMiner Repository and used from there which helps to organize the usually large number of scripts. Furthermore, widely used modeling methods are directly integrated as RapidMiner operators as usual.

The new extension can be installed via the update manager of RapidMiner. Please find here more information about the available RapidMiner extensions.