Forbes on Data Science: “Half-Life Of A Buzzword”


Read the discussion on the half-life of a buzzword and is “Data Science” replacing “Business Analytics” as the popular degree title for people interested in data and analytics.

Gil Press has an interesting article in Forbes:

Data Science: What’s The Half-Life Of A Buzzword?, which grew from a discussion between me, Gil, Meta Brown, and Shlomo Argamon on Data Science. Gil wrote

A recent survey conducted by Gregory Piatetsky-Shapiro of KDnuggets, found a “strong interest in online certificates and MS degrees in Analytics, Big Data, Data Mining, and Data Science, even among those who already have graduate degrees.”

According to Piatetsky’s www.kdnuggets.com/2013/02/education-analytics-data-mining-trends-overview.html analysis of graduate degrees in these fields, they started to emerge in 2007, with a big spike in 2012. The proliferation of these programs-which the survey’s findings indicate will continue unabated for the foreseeable future-prompted a strong response on Twitter from Meta Brown, a consultant and writer on business analytics, and rejoinders by Piatetsky and Shlomo Engelson Argamon, director of Illinois Institute of Technology’s new Master in Data Science program. Delighted, I convened via email a virtual panel on data science education.

Google Trends shows that “Analytics” popularity started in 2006, after Google Launched Google Analytics in Dec 2005. We also note that “Analytics” excluding Google [analytics -google] searches were about 50% of all “Analytics” searches. 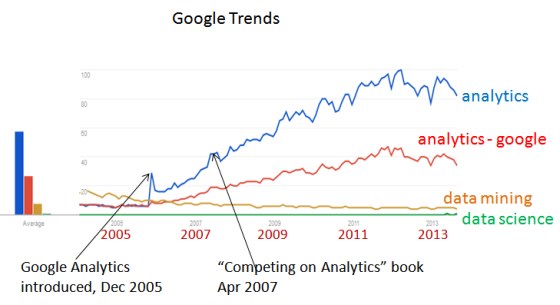