Nate Silver FiveThirtyEight forays into climate science and drowns in criticism for bad data analysis. We examine a basic data science question: Can we tell if natural disasters are related to climate?

Like many, I was a big admirer of Nate Silver political forecasts on his FiveThirtyEight blog. Nate successfully predicted presidential results in all US 50 states in 2012 (although he got lucky on Florida).

Nate leveraged his success and moved from NYTimes to a new, expanded venture, FiveThirtyEight.com, based at ESPN, where he hired additional staff and plans to cover not only sports and politics - his traditional strengths, but also other areas, like climate, economics, and life(?).

Unfortunately, the first foray of FiveThirtyEight into climate science - "Disasters Cost More Than Ever - But Not Because of Climate Change" - threatens to undermine Nate Silver reputation.

That article was criticized by Paul Krugman and many others as biased and inaccurate - not surprising, given the reputation of the author, Roger Pielke Jr., as a climate change "sceptic".

Of course, science is based on scepticism and doubt, but given the overwhelming scientific evidence in favor of climate change, the criticism of climate change should be very well founded. However, the FiveThirtyEight article commits many errors - well detailed here.

"When you read that the cost of disasters is increasing, it's tempting to think that it must be because more storms are happening. They're not ... In reality, the numbers reflect more damage from catastrophes because the world is getting wealthier"

Here I want to examine just the data science aspect.

Global temperature is increasing - here is one chart.

Is there a simple test to determine if climate change (global temperature increase) has effect on natural disasters ?

Think about it for a minute.

If one type of natural disaster was due to climate, while another type was not, then we could compare the frequency of these two types to see the effect climate change has on natural disasters.

Well, big weather events like hurricanes and floods are clearly related to climate change. However earthquakes, as far as we know, are not related.

Here is the graph from Munich Re - one of the largest insurance companies, covering earthquakes and other weather-related disasters from 1980 to present. 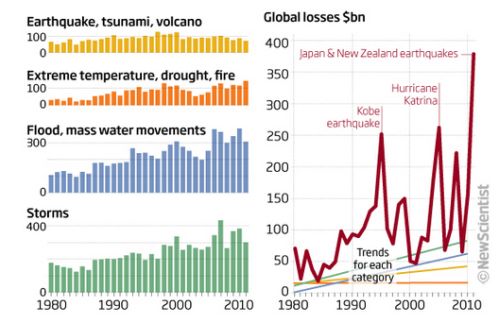 We can clearly see that the trend for the number of earthquakes is flat, while trends for weather-related disasters - floods and storms - are increasing.