Enterprises are conflicted in the 21st century on how to make best use of their tremendous amount of data. Thus, it is no wonder that in order to maximize their profits by analyzing the heap of data they have accumulated over the years they are willing to pay hefty amounts to professionals with Big Data skills.

According to a report released on Jan 29, 2014 by Dice, a tech-career site, Big Data is dominating among the top paying skills with R being the highest paid skill in year 2013. Average salary for a professional having knowledge and experience in programming language R was $115,531 in year 2013.

Enterprises are clearly willing to pay a good premium to find or retain good people to help make sense of their data. “Companies are betting big that harnessing data can play a major role in their competitive plans and is leading to high pay for critical skills” said Mr. Shravan Goli, President of Dice. In the current talent landscape, Big Data skills mean big pay as most of the top salaries are trying best to attract and retain employees with big-data related skills.

Other Big Data oriented skills such as NoSQL, MapReduce, Cassandra, Pig, Hadoop, MongoDB are among top 10 paying skills. Interestingly, Hadoop, even after seeing a year over year decrement of 5.6% in average salary, stands at number 9 with average salary being $ 108,669. Mr. Goli’s suggestion to technology professional is to volunteer for big data project, which would not only make them more valuable to the current employer but also make them more marketable to other employees. 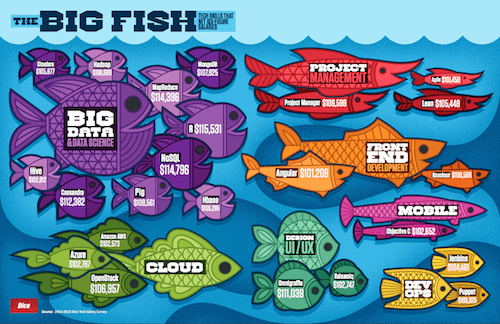 Silicon Valley has once again topped the list of highest paid metropolitan areas when it comes to tech talent. With the average salary of $108,603, Silicon Valley has seen a year over year increment of 7.2% on an average. Silicon Valley has been the highest-paid market since Dice first published the salary survey in 2002 (with 2001 numbers). 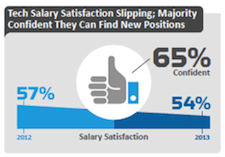 In general, more technology professionals in the U.S. enjoyed merit raises over the last year, driving average salaries up in 2013. Average U.S. tech salaries increased nearly three percent to $87,811 in 2013, up from $85,619 the previous year. Technology professionals understand they can easily find ways to grow their career in 2014, with two-thirds of respondents (65%) confident in finding a new, better position. That overwhelming confidence matched with declining salary satisfaction (54%, down from 57%) will keep tech-powered companies on edge about their retention strategies.

Tech professionals are recognizing employers’ efforts, with just 34 percent of respondents saying their company offered no motivators last year, down from 47 percent who felt that way in 2009. Likewise, the motivator with the most dramatic rise over that timeframe: increased compensation.

The complete report is available for free download at: Dice Tech Salary Survey 2014