Why India is emerging as a powerhouse of Analytics, Big Data Applications, Privacy, What will replace Big Data, and more.

I recently had an email discussion/interview with Saxon Global, to find out more about what are they doing.

Saxon Global is one of the fastest growing BI, Big Data, and Cloud Service providers. Headquartered in Texas, and with offices in Bangalore and Hyderabad in India, Saxon Global has grown fast since 2011 and is delivering solutions to Financial Services, Retail, Telecom, Healthcare, Banking and Media Entertainment companies. Here is the discussion, with answers provided by Mr. Haricharan, VP, Sales & Marketing at Saxon Global.

Gregory Piatetsky: Q1. India is emerging as a powerhouse of Analytics. What are some of the key factors that explain this trend?

Saxon Global: The key factors that explain this trend are the growth of analytics services in the last few quarters, emerging companies in the space, the Indian IT majors making paradigm shift in their offerings to the all-new SMAC, where Analytics is forming a major pillar. SMAC stands for Social, Mobile, Analytics and Cloud. As the traditional transactional systems are getting outnumbered by the number of applications that are getting developed on the Social, Mobile and Cloud platform, the data generation, dissemination and storage has also changed. Analytics applied to the new kind of data on different platforms is gaining ground.

GP: Q2. What is realistic to achieve for Big Data Applications?

SG: The possibilities of Big Data applications are enormous and can be envisaged to solve almost any data problem. Some of the realistic applications of Big Data I feel would fall in more unstructured data domain and less on the structured side. So, industries/business which generates or rely more than 50% on data coming in as unstructured will be able to exploit the capabilities of Big Data much better and will demonstrate higher ROI. Retail, Geology & Climate, Energy, New Age Media, Telecommunications, Healthcare qualify as natural candidates and have use cases from real-time alerts on the weather, CDR analysis, personalized recommendations while surfing or transacting on-line or energy optimization alerts can make the best use of Big Data Technologies. 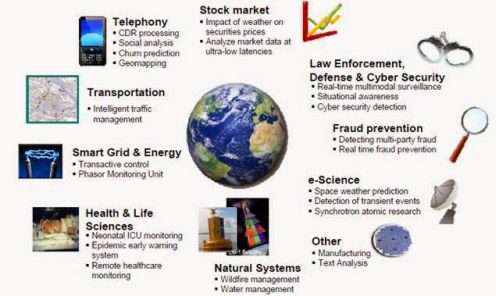 GP: Q3. What are some of the success stories of your customers?

SG: One of the earliest success stories came to us with implementation of Big Data Analytics solution to leading media portal. This I must say was much before the Big Data officially was coined and Hadoop became kind of synonymous to Big Data. We build VLDB (Very Large Data base) using the columnar DB techniques and the in-memory database such as Berkeley DB. We helped them to crunch millions of log-lines, provide real-time alerts and integration into ad server network for effective engagement.

GP: Q4. Can you share some of the failures - what did not work and what did you learn from it?

SG: We have had challenges rather than failures we have encountered. This has been more on identifying the right use case, defining and prioritization of key success factors for big data implementation. Adoption rate and socializing the big data capabilities inside the client organization has been tough for us.

GP: Q5. Big Data tends to reduce privacy. What are attitudes towards privacy in India, among people, companies, and government?

SG: Currently Privacy has not been seen as a major concern among people though the Companies and Government are highly concerned about it. People at large are still enjoying the new found experience of personalization that is being offered to them that effectively is using their private data (monitoring their behaviour, mapping them to their demographics and slicing/dicing the tastes, preference).

But, in near term when they find getting bombarded with ads, promotions and awkward requests they will get awakened and raise objections for it. This would be similar to what we have seen in the telemarketing space where users will start subscribing to do not call list or will turn off all the cookies and would like to leave little or no data at all to be mined.
The recent ruling from the European courts of backing “Right to be Forgotten” by Google and allowing individuals to demand for it will be kind of norm in most of the countries.

GP: Q6. How much hype and reality is in Big Data trend? What buzzword will replace Big Data?

SG: Big Data is no exception and cannot escape the fads and facts that come along with any new technology or tools. Fads of today will convert to facts of tomorrow and in a way hype encourages several things such as more experimentation /proof of concepts, technology collaborators/contributors to play around and help it mature.

The hype around Big Data is that all the data problems that we have will come to an end and it provides nirvana to Companies grouping with large and varied data sets. The reality is that it has helped few verticals (Media & Entertainment, Healthcare) to achieve the benefits it promised, it has been quite successful where incremental approach was taken. It is yet to go full steam in verticals such as Financial Services, Energy & Utilities.

SMART (Scalable Modular Analytical Replaceable Transformed) data is going to be the buzz which will replace Big Data. Data Sets and Technologies will become more like Lego blocks that provides interchangeability and lower cost of total ownership. I somehow feel the greener initiatives and pressure to reduce carbon foot print will also question the necessity of storage of large amounts of data (if the pay-off is not greater or the opportunity cost is undesirable) and crunching every data emanating. We understand and crave for the data driven decision making but sooner or later we may be advised “information diet”.

Information diet would be more like we ensure that we are getting the necessary nutrients but at the same time ensuring not over burning ourselves with too much consumption and grinding of data. I am also convinced data the economics principle of Law of Diminishing returns will become applicable and will help us realized data volumes beyond particular point is of no consequence or will have little impact towards decision.