We analyze the CRN Big Data 100 for insights into trends in the future of Big Data companies, including changes in database solutions, active regions, and what industries are undergoing the most change right now.

We analyze the lists included in the CRN Big Data 100 to find trends related to Big Data companies.

Ignoring the obvious words like software, information, technology, etc., some standout words include Hadoop and NoSQL. In fact, 21 out of 100 companies in the CRN Big Data 100 contain the word Hadoop (most notably 11 out of 25 Big Data Management companies). This is just evidence of how integral Hadoop has become in the infrastructure of many companies that handle big data.

NoSQL is an interesting term because it is also quite common, being featured in descriptions of 7 out of 100 companies. These companies include Amazon with their highly-scalable DynamoDB and the widely-known MongoDB. This, coupled with the recent IBM acquisition of Cloudant, a major DBaaS vendor based on Apache CouchDB, goes to show that NoSQL database systems are faring quite well in today's market.

Now we will look at some interesting trends in the geographical distribution of these companies.

What this image makes clear is that the majority of the 92 US companies in the CRN Big Data 100 are located near either the East or West coast. What it doesn’t show, however, is just how active the Bay area is. 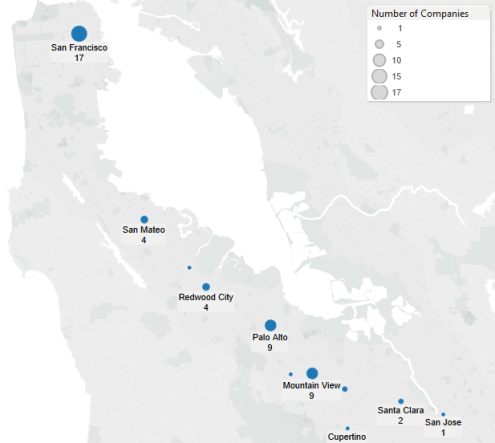 Zooming in, we see here that a huge number (51) of the CRN Big Data 100 companies lie within the Bay area, with San Francisco being the single most represented city on the list. This means that approximately 55% of CRN Big Data companies were founded in this relatively small region of California. This figure grows to 67% if only considering the emerging companies.

This all goes to show just how active the bay area is for big data companies, especially those that are just now emerging. It will be interesting to see if this trend continues in the future.

Now, we will look at when these companies were founded. 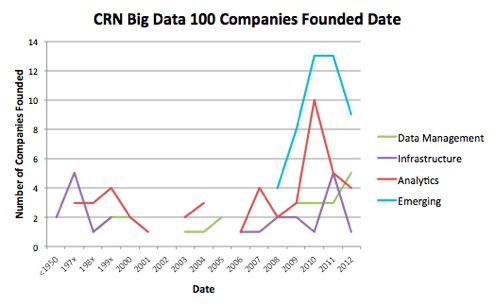 
Looking at this chart, there are two stories that stick out.

The first is the lack of companies founded between 2000 and 2003. This can be accounted for by the fact that this was in the wake of the bursting of the dot com bubble, and serves as a warning of what can happen when caught up in a bull market.

The second is the huge number of companies (53) founded since 2008. More than half of the companies on this list were formed in the past six years, showing that industries built around big data are booming and are quite approachable to small companies with fresh ideas. The downside to this is that the space is getting very crowded, and we are likely to see some fierce competition among the various players in the coming years.

The companies chosen by the CRN for their Big Data 100 are very illuminating. By keeping up with these kinds of lists, we can try to keep up with the development of what is definitely an exciting industry.