KDD-2014 was the largest (with over 2300 people) and the best Data Science meeting, highlighting the huge progress of Data Science made with Big Data, and its even more amazing potential.

I have just attended

With an amazing 2,300 people attending (twice the size of KDD-2013), KDD showed that it was not just the leading research conference in Data Mining, Data Science, and Knowledge Discovery, but also the largest conference in the field. Kudos to KDD-2014 general chairs Claudia Perlich and Sofus Macskássy for excellent organization.

There were 151 research papers accepted from a record 1,036 submissions.

For the first time at KDD, over 50% of attendees were from the industry. Attendees came from a record 52 countries, with most from the US (1506 people), followed by China (86), Japan (57), and Germany (40). More data mining on KDD statistics in the second part of my post.

For a detailed overview of the papers, review process, keywords were more likely to get papers accepted/rejected, and other statistics, see a great presentation compiled by PC Co-chair @Jure Leskovec:
www.slideshare.net/jleskovec/data-science-view-of-the-kdd-review-process

Jure and PC co-chair Wei Wang created a very full program, but with up to 6 parallel tracks I frequently wanted to be in 3 places at once! 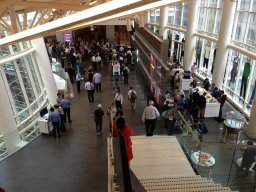 The success of the conference was very evident in the first day, with part of the workshops held in the beautiful new Bloomberg headquarters. Bloomberg corporation and its CEO @DanDoctoroff deserve a lot of gratitude from data scientists for their support of KDD-2014 and its theme, Data Science for Social Good.

There were many presentations and talks about social good, including

To remind us that, alas, not all is nice and good in our world, Rand Waltzman from DARPA gave a rather scary talk about Information Environment Security, how rumor spread in social media can be started and detected, and how some terrorist organizations are surprisingly effective users of social media for their ends.

However, the core of the conference was serious and excellent data science. Many popular sessions and workshops were packed wall-to-wall, with barely a place to lean against! !
Some technical topics that I found especially notable/popular include:

Pedro Domingos Innovation Award Talk on Sunday, Aug 24, was on Scalable Data Science and Very Large Scale models. He made an analogy that Very Large Scale models are like VLSI - we now begin the transition to very large scale models. He introduced and explained 3 principles for very large scale models and proposed Markov-Logic based Sum-Products Networks as a way to building Sum-Product models efficiently.

Conference program was packed with interesting research and industry presentations, sometimes with up to 6 parallel activities, so I can only mention a few.

On Monday, Aug 25, Oren @Etzioni, a distinguished researcher, entrepreneur, and now the director of Allen Institute for AI, gave a controversial keynote on "The Battle for the Future of Data Mining".

He argued that the traditional data-driven approach, including Deep Learning, is limited in its potential and proposed a knowledge-driven method - building a very complex knowledge base. As a test of their system, he is developing an open question answering system which will be able to answer questions from 4th grade science exams. Here are some of my tweets from his talk (with "#kdd2014 Oren Etzioni" removed from 2nd & following tweets)

Both keynotes were covered in NYTimes: Looking to the Future of Data Science.

Here is Part 2 of my report: The Magic Module network and Privacy vs Big Data.