Data Science as a profession – time is now

Now is the time to begin thinking of Data Science as a profession not a job, as a corporate culture not a corporate agenda, as a strategy not a stratagem, as a core competency not a course, and as a way of doing things not a thing to do.

Over the past 2 to 3 years, I have attended many Big Data and Data Science conferences (where I have given numerous talks, participated on many panels, and talked with countless data professionals). During this same period, I have also been receiving numerous contacts each month from hiring managers and recruiters who are seeking to hire someone like me. Recently, I have been detecting increasing dismay and agitation among recruiters and managers who are trying to hire data scientists.

As the digital data revolution is now in full sail, there is an explosion in the number of job announcements and open positions for data scientists. Such high demand brings lucrative salaries and hiring bonuses. Consequently, while there are outstanding applicants for these jobs, there are also many wannabes. One recruiter (who has been trying for the past year to hire many data scientists for one large client) recently told me that he is disappointed -- many of the job applicants that they interview tend to be lacking in fundamental data scientist skills and aptitudes: statistics, programming, computational literacy, data literacy, data management, data handling, databases, machine learning, data mining, visualization, communications, scientific curiosity, some science training, plus some domain expertise.

I believe that it is fair to say that we no longer believe that there exists a mythical "purple unicorn" out there somewhere who has all of those data science skills, talents, and aptitudes rolled into one person. We are satisfied to believe that data science takes a team (or a village). Here are two recent perspectives that enumerate the relevant data scientist skill areas for your data science team: "Are You Ready for Data Science?" by Shelly Palmer; and my summary: "Data Science: The whole is greater than the sum of its parts."

Therefore, even though we don't expect one single person to have all of these talents, it is disappointing when "data scientist" job applicants have only one of the requisite skills (software engineering, or programming, or SQL, or database administration) while simultaneously lacking in any of the key Data Science skill areas (statistics, machine learning, data literacy,...). 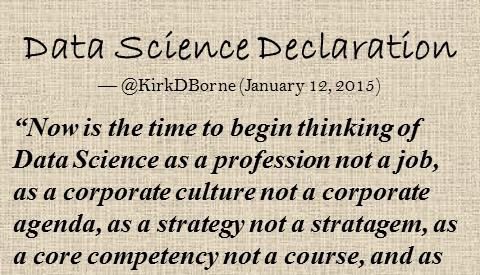 For the above reasons and more (relating to the need for business change and a corporate culture revolution, to become more data-driven), I have been motivated to bring a little more clarity to what Data Science really is. It is definitely more than Java programming, and it goes beyond the ability to perform a single type of operation on data. In particular, I wrote the following in January of this year -- this is my Data Science Declaration for 2015:

“Now is the time to begin thinking of Data Science as a profession not a job, as a corporate culture not a corporate agenda, as a strategy not a stratagem, as a core competency not a course, and as a way of doing things not a thing to do.”