How Big Data Can Improve the Lives of the Poor

The role of Big Data in allowing greater financial inclusion for the poor also is a trending Internet topic. But it’s mostly creating optimism and interest, rather than controversy and dissent.


The arguments over measuring inequality in America took a different turn recently, when New York Times op-ed contributor Thomas Edsall ignited a debate by asking a controversial question: How poor are the poor?

Edsall argued that it’s reasonable to conclude that the actual poverty rate has fallen considerably over the past 50 years, citing economic measures and other statistics from a surprising essay by Christopher Jencks, a liberal sociologist, in the current issue of the New York Review of Books. Opening that door prompted a firestorm of opinions in the blogosphere — the continuation of a battle rhetorically defined in the public consciousness in the 1980s, when former President Ronald Reagan declared that “Some years ago, the federal government declared war on poverty, and poverty won.” 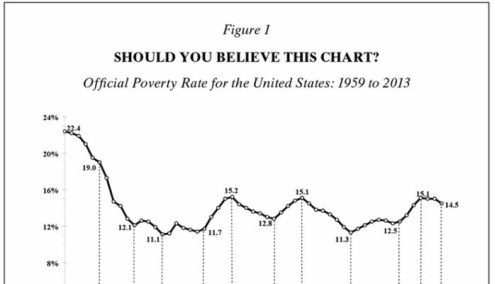 If you want to stake out a position, you might want to look again at Edsall’s previous column in 2013 that explains the three ways we generally measure poverty in the U.S.: “The official Census Bureau method, which uses a set of income thresholds that vary by family size and composition; an experimental income-based method called the Supplemental Poverty Measure that factors in government programs designed to help people with low incomes; and a consumption-based method that measures what households actually spend.”

Statisticians and sociologists can and do spend a lot of time debating how that data is applied and what the numbers mean, and in political arguments advocates sometimes cite only the results that support their views. The strong reactions we’ve just seen regarding how to best measure progress in addressing poverty clearly bear out the controversy that surrounds this question.

I’d like to take the debate in a different direction.

We can separate statistics from their ability to accurately track improvements in well-being over the past few decades and move on to what might be considered a constructive and forward-looking approach: How can Big Data improve the lives of the poor? For example, a decade-long project to collect real-time, on-boat fishing data on the east coast of India has the potential to curb illegal fishing trawlers and perhaps give greater scope to smaller, traditional fishermen.

Although it hasn’t drawn as much attention as the debate sparked by the Edsall and Jencks columns, the role of Big Data in allowing greater financial inclusion for the poor also is a trending Internet topic. But it’s mostly creating optimism and interest, rather than controversy and dissent.

The Consultive Group to Assist the Poor, a global partnership that supports financial inclusion, noted in a report this month that the expansion worldwide of innovative digital financial services has cleared a path for millions of poor customers to move from an unbanked economy to mainstream banking. More than 80 counties have launched such services through the use of mobile phones in recent years, the report said. A CGAPvideo explains how “digital data offers huge potential for financial inclusion” for the poor. Providers can cross-reference huge amounts of data, from utility payments to housing conditions, to tailor mobile money services to consumers who previously had little or no access to them.

Building on that, the Center for Financial Services Innovation also released two research reports recently tracking current developments in Big Data analytics that also are helping poor consumers gain access to credit, financial management, and other services. CFSI’s belief: Big Data has the potential to improve the financial health of consumers and the success of providers on a large scale.

Credit scores are one example. Consumers with poor credit histories often turn to expensive payday or car title lenders for loans. But using Big Data and overlaying vast data sets from public records, online habits, payment histories, and more can create alternative ways to lend and borrow. Some 30 to 35 million U.S. consumers are considered unscorable by credit bureaus due to thin or nonexistent credit file information, for example. But 10 million of them actually have scores over 600, when a wider range of data is used to compute their scores, the CFSI report noted.

The role of that data can be life-changing, given that some 60 million adults in the U.S. are either unbanked or underbanked, meaning they have little or no connection to a traditional financial institution, and spend more for financial services outside the mainstream.

Using Big Data to improve financial services for the poor is not without risks. Privacy, data security and exploitation are among them. It’s worth looking more closely at how to tackle those concerns, as the role of Big Data in providing financial services for the poor continues to grow. No doubt we’ll still find plenty of statistical measures to hash out regarding the effectiveness of anti-poverty programs and the actual poverty rate. But when it comes to the politics of poverty, the promise of Big Data may create an entirely new conversation.

Bio: Peter Bruce is founder and president of The Institute for Statistics Education at Statistics.com.

Reposted with permission from here.