Money does buy votes, unless you are Jeb Bush

Can money buy votes? In Iowa republican caucuses Jeb Bush spent about $2,700/per vote, with little to show. However, without Jeb, there is a strong correlation between money and votes, with $210/vote on average. We also find that spending more time in Iowa does not help.

comments
The Iowa caucuses, held on Feb 1, 2016, attracted a lot of attention and a lot of advertising money.

An interesting quantitative angle on the Republican side was the story Jeb Bush Spent $2,800 Per Vote In Iowa, which showed a chart of money spent per vote and suggested

However, a one-dimensional chart like this cannot be used to make any inferences about relationship of money and votes, so I decided to investigate.

I got the ad spending money from Morning Consult and charted the votes vs ad spend. 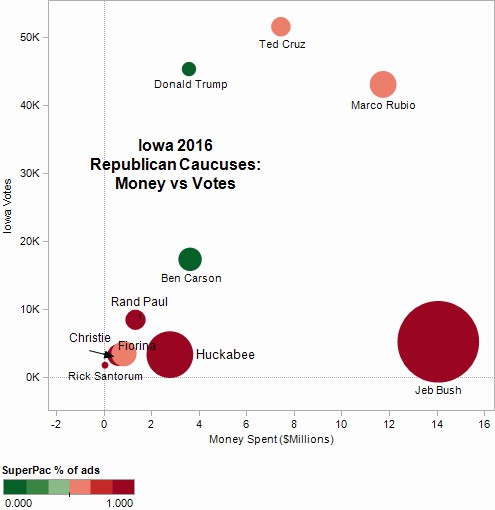 Here the size of the circle corresponds to total ad spend / vote, and the color to % of money from SuperPacs (red - 100%, green - zero). Only Trump and Carson had most of their ad money from their campaign (green circles), while other candidate ads were mostly paid for by SuperPacs.

The chart shows that Jeb Bush result is an anomaly, with about $2,700 / vote (slightly different, but close to $2,800 reported in Huffington Post).

Including Jeb, the regression for votes vs ad money spent has R2=0.21 - almost no correlation. 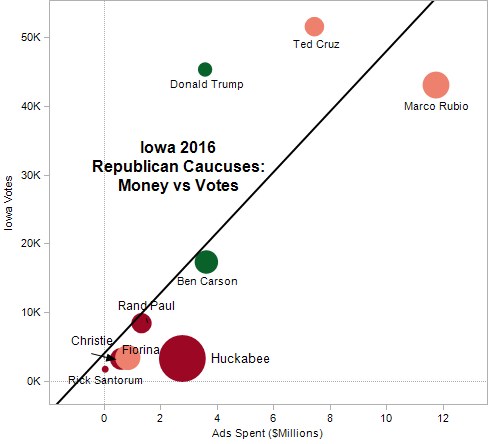 We also note that Rubio result is less of a surprise, considering his huge ad spend.

Another interesting angle is days in Iowa vs votes.

The political tradition says that candidates need to spend a lot of time in Iowa to succeed.

Looking at all the candidates, there is actually a negative relationship, since 3 of the lowest performing candidates - Santorum, Huckabee, and Fiorina, spent the most time in Iowa. 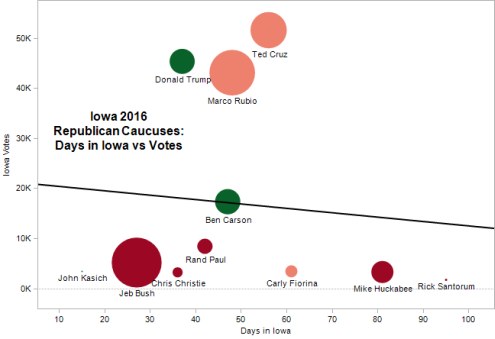 Here is the data.