We examine the money and votes in New Hampshire 2016 Primary. Over $100 million was spent by all campaigns, with hugely varying results, and no apparent correlation between money and votes.

comments
The New Hampshire primary held on Feb 9, 2016, provided another test case of effect of money on actual votes.

Our analysis of Iowa 2016 Republican Caucuses - Money does buy votes, unless you are Jeb Bush showed that excluding Jeb Bush - who spent about $2,800 per vote in Iowa - there was a strong correlation (R2=0.67) between money spent (whether by SuperPacs or campaigns) and votes received.

This time, Jeb Bush campaign got slightly better results but still spent about $1,150 per vote received. The average was $337 per vote, and the lowest values were for Cruz ($17/vote) and Trump ($37/vote). We also included 2 democratic candidates. 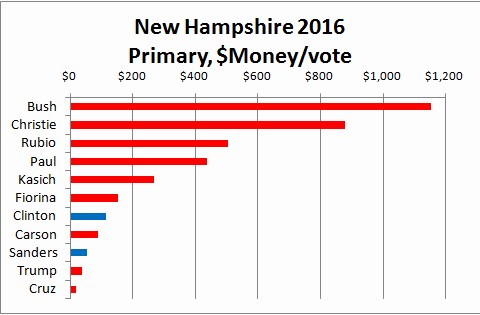 However, even excluding Jeb Bush, there is little correlation (R2=0.02) between money spent on campaigns and votes. 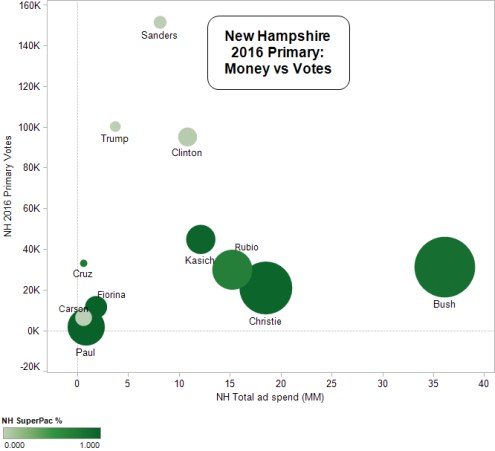 Here the size of the circle corresponds to total ad spend / vote, and the color to % of money from SuperPacs (deeper green, closer to 100%, light green - close to zero). Sanders, Clinton, Trump and Carson had most of their ad money from their campaign (light green circles), while other candidate ads were mostly paid for by SuperPacs.

The New Hampshire primary political tradition expects the candidates to spend a lot of time in New Hampshire.

We looked at the number of days candidates spent in New Hampshire, according to WMUR, and there is no significant correlation either. On republican side, 4 candidates spent over 50 days in New Hampshire - Kasich, Christie, Bush, Fiorina but received less votes on average than Trump or Rubio who spend much less time. On Democratic side, Sanders and Clinton spent about the same time in NH, but with very different results. 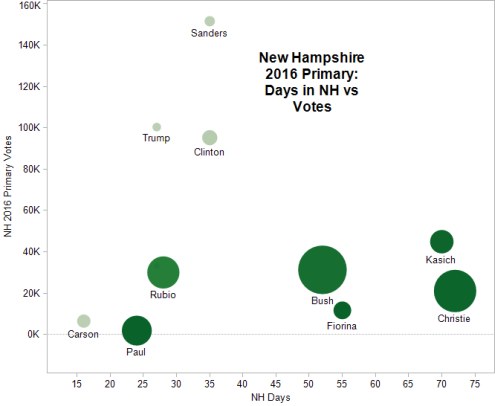