The holiday classic gets a data science makeover. Let your belly shake like a bowl full of jelly. 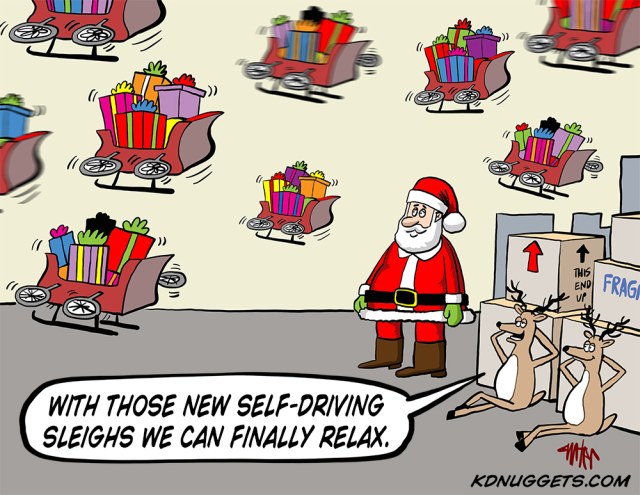 'Twas the night before analysis, when all thro' the lab
Not a consultant was stirring, no more coffee to grab
The algorithms were coded in the system with care
In hopes that the data soon would be there
The Data Scientists, restless, tired and half dead
Visualizations of regressions danc'd in their heads

Tech support on call, and I with a beer can
Had just settled my brain, data munging began
When from the data warehouse arose a clatter
I sprang from my chair to see what was the matter
Away to the phone, that rang off the hook
“We may be in trouble! Quick take a look!”

I looked at the screen, where the data was displayed
My heart skipped a beat, and I was dismayed
When what to my blurry eyes should appear
But thousands of errors, it was our greatest fear
The data was scrambled, the analysis was damned
I knew in a moment, it just hit the fan

They dove at their keyboards and let their fingers fly
But it was so bad, the analysts started to cry
I looked at my computer as the errors ran past
I had to think of a fix, and think of it fast.

And then in a twinkling, I heard at the door
The Chief Data Scientist, and a few more

They came to my office, it was a bad situation
My boss puts the mean in standard deviation
The data was hosed, the analysis failed
I really wish earlier that I had inhaled
My boss hit the screen, and it quickly cracked
And he look'd like a grey wolf just about to attack

His eyes — how they blazed! Oh what a fury
His cheeks were bright red, rage like a flurry
“What happened here?” He wanted to know,
“Why is the analysis now a no go?”
I trembled inside, gritted my teeth
And opened the dataset lurking underneath

And when I executed the command
All of the clusters became a wasteland
“We can’t tell the Client it is already a failure!”
“I have to think of something that I can tell them later!”
His flashing eyes and scratching his head
Soon gave me to know I had something to dread

He spoke not a word, but went straight to his phone
He typed out a text, finished it with a groan
He reached into his pocket to do what he planned
And handed me a pink slip, I had been canned!
“We cannot let anyone know that something went wrong.”
“So get out of this office, and don’t take too long!”
And I heard him proclaim, as he walked out of sight
“That was your two week notice! Keep your mouth shut tight!”