KDnuggets has reached an amazing milestone of one million unique visitors in March 2021. We review how we got here.

By Gregory Piatetsky, KDnuggets on April 3, 2021 in About KDnuggets, History, Trends 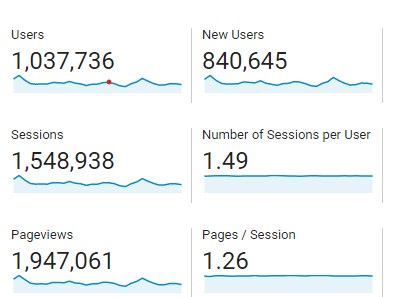 In March 2021, KDnuggets reached an amazing milestone of over one million unique monthly visitors, according to Google Analytics (GA calls them users).

This success is due to excellent writers who contribute to KDnuggets, and I want to highlight the top 5 blogs in March below, which received in total over 300,000 views. But we also have deep content, with over 13,000 posts and pages, that made the other 700,000 views.

To motivate and reward KDnuggets authors, we will start next month the KDnuggets Authors Reward programs, where the authors of top blogs will receive a share of our banner advertising revenue. Details will be announced soon.

How did we get to one million visitors in one month?

I started KDnuggets as an email newsletter, with the first issue sent in 1993 to 50 researchers who attended KDD-93 workshop that I organized. A website was added in 1994 (hosted at GTE), and domain www.kdnuggets.com was created in February of 1997 when I left GTE. KDnuggets had only about 20,000 monthly visitors around 2010, with posts published weekly along with the newsletter. I switched to daily publishing around 2010 and the number of monthly visitors grew to 50,000 in 2011. I switched to WordPress in 2013 which enabled me to get many talented editors and assistants who helped with KDnuggets over the years.

With the Big Data, Data Science and Machine Learning field growing, our audience also grew. KDnuggets visitors reached 100K in 2014, 200K in 2015, 400K in 2016, 500K in 2017 and 600K in 2019. When the pandemic hit in early 2020, more people started working at home, and we saw increased readership of KDnuggets. But our numbers grew especially strongly in 2021, with the prospect of economic recovery and increased demand for data experts.

See more about KDnuggets history in a post I wrote in 2018 for KDnuggets 25th anniversary.

Over the years our audience has changed from mainly researchers to mainly industry practitioners and aspiring Data Scientists, and our content is now mainly interesting opinions and useful tutorials.

But our mission remains to cover the exciting field of Data Science, Machine Learning, and AI and to help our readers to do their job better, and sometimes entertain them with cartoons.