KDnuggets Home » News » 2021 » May » Tutorials, Overviews » A simple static visualization can often be the best approach

A simple static visualization can often be the best approach

How I overengineered a worse solution by making an interactive visualization. Photo by Vicky Hladynets on Unsplash

I made a common User-centered Design trap when I tried to revise a bad visualization.

But I recently had to ask myself a question when remaking a bad visualization: rather than ask how to make it dynamic; I needed to ask if I should.

To explain my problem, I should talk about #Makeovermonday.

Creating a cooler visualization (that misses the point)

As part of #MakeoverMonday, I took a dataset from UNICEF that reviews the disparity between adolescent females and males in Sub-Saharan Africa regarding HIV infection and death rates. 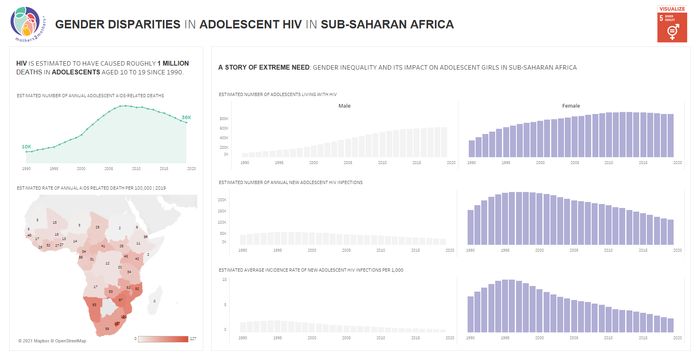 One of the things that stuck out to me immediately (besides the wonky color palette) was the fact that it was tough to compare (or even see) the difference between male and female figures. As a result, my mind immediately jumped to the interactions that I had been learning about.

I decided to take the map of Africa (which had mortality rates) and map that interaction to a series of interactive bar charts that would easily showcase the difference between the male and female statistics in many different categories.

It looked cool, made for easy comparison, and the tooltip that popped up when clicking on a country was an interesting way to see how a country’s statistics compared with the average for Sub-Saharan Africa.

It also completely missed the point of the visualization. But it wasn’t until after watching the Visualization Review that #MakeoverMonday does with the dataset that I noticed my mistake. 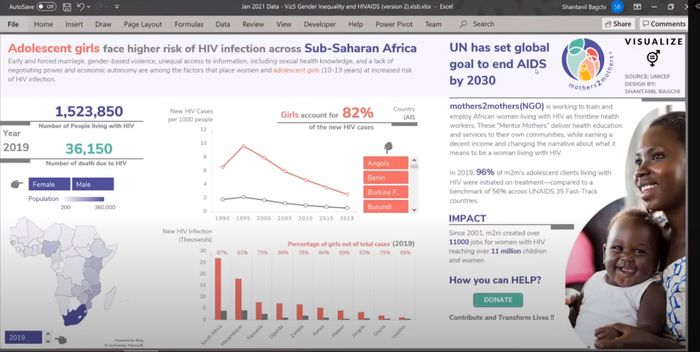 An example from the Visualization review

I noticed that all of the ones presented were static infographics. None of them were as detailed as mine when it came to individual numbers, but they didn’t need to be: a few simple statistics would have probably done the trick, rather than a whole lot of interactivity.

That’s something that I, along with many others, forget sometimes.

Interactive visualizations and over-engineering a solution

With the proliferation of tools such as Tableau or PowerBI for creating dashboards, not to mention advanced coding languages such as D3.js, it’s easier than ever to make yourself an interactive visualization quickly.

Creating one is as easy as making a few charts and hooking up interactions between the two.

But with this ease comes another question: should you? It’s tempting because it’s easy, and it seems to add another layer of depth to the data.

Looking at many posts on the subject, and you’ll find that people espouse the benefits of interactive visualizations, like posing multiple questions, more customer engagement, and a better user experience.

But no visualization choice is without its tradeoffs: what you gain in depth, you also lose in focus.

Creating a static visualization requires refining the clarity of your data story to the point where only one message or variable comes through.

On the other hand, dynamic visualization can create an environment where you can tell several muddled data stories and leave it up to the user to figure it out.

Not to mention that the more choices you have, the more users either split their time looking at different variables or areas of the chart.

As a result, both of them have their uses.

A static visualization is best used to explain when you want to present a high-level summary, message, or key points without a need to dive further.

A dynamic visualization is best suited for exploration. Whether you want to do a deep dive into the details, explore multiple data stories or examine relationships between different variables, this can often be the best approach.

That’s not to say that you can’t create dynamic visualizations for an explanation, just that it’s not cost-effective to do so: you basically have to create multiple data stories with clarity, then spend extra time to make the interactions or relationship between the stories clear as well.

Many times, that can be an over-engineered solution when compared with a simple static visualization.

So after learning that, what would I have done differently?

What I would have done differently

One of the reasons I considered my first visualization a mistake was because I missed a single word when I first looked at it: “disparity.”

Disparity hints at something beyond a mere comparison: it signifies an order of magnitude. Therefore, I shouldn’t tell multiple data stories about a country’s statistics, defined by several factors. Instead, I should tell a single data story: how extensively does HIV affect females than males in Sub-Saharan Africa? 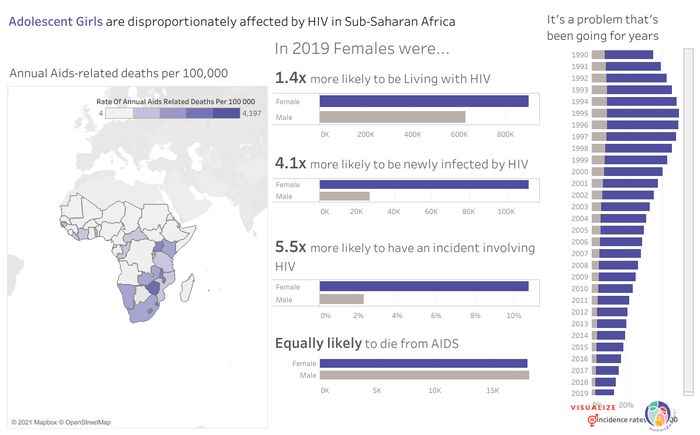 To do this, I decided to take a single data point, the year 2019, and see how females were disproportionately affected across many categories.

The disparity shown here is easier to understand within a single year, with several supporting graphs showing the widespread problems across countries and over the course of decades. There are definitely things that need to be polished here (I’m running into a ton of Tableau formatting issues as I’m still learning), but doing something like this allows me to emphasize the scale of the problem in much more detail than the interactive visualization.

The allure of the latest tools

As UX Designers, we’re likely all too aware of how people sometimes chase trends, tools, and innovations instead of a better user experience.

Developing an interactive animated UI in Adobe After Effects or a stunning UI you put up on Behance is often what people want instead of what they actually need.

Interactive visualizations, such as dashboards, are not very different. It’s a powerful tool, but not strictly better than static visualizations: both have their strengths and weaknesses.

If you’re trying to get your users to manipulate and get a deep understanding of the different aspects of your dataset, then an interactive infographic may be appropriate.

But if you’re trying to make a point, then a static visualization may be better.

So before you jump into creating something interactive, consider whether or not the story that you’re trying to tell really needs it.

KDnuggets Home » News » 2021 » May » Tutorials, Overviews » A simple static visualization can often be the best approach