In this post, we’ll go into summarizing a lot of the new and important developments in the field of computer vision and convolutional neural networks. We’ll look at some of the most important papers that have been published over the last 5 years and discuss why they’re so important.  The first half of the list (AlexNet to ResNet) deals with advancements in general network architecture, while the second half is just a collection of interesting papers in other subareas.

The one that started it all (Though some may say that Yann LeCun’s paper in 1998 was the real pioneering publication). This paper, titled “ImageNet Classification with Deep Convolutional Networks”, has been cited a total of 6,184 times and is widely regarded as one of the most influential publications in the field. Alex Krizhevsky, Ilya Sutskever, and Geoffrey Hinton created a “large, deep convolutional neural network” that was used to win the 2012 ILSVRC (ImageNet Large-Scale Visual Recognition Challenge). For those that aren’t familiar, this competition can be thought of as the annual Olympics of computer vision, where teams from across the world compete to see who has the best computer vision model for tasks such as classification, localization, detection, and more. 2012 marked the first year where a CNN was used to achieve a top 5 test error rate of 15.4% (Top 5 error is the rate at which, given an image, the model does not output the correct label with its top 5 predictions). The next best entry achieved an error of 26.2%, which was an astounding improvement that pretty much shocked the computer vision community. Safe to say, CNNs became household names in the competition from then on out.

In the paper, the group discussed the architecture of the network (which was called AlexNet). They used a relatively simple layout, compared to modern architectures. The network was made up of 5 conv layers, max-pooling layers, dropout layers, and 3 fully connected layers. The network they designed was used for classification with 1000 possible categories.

The neural network developed by Krizhevsky, Sutskever, and Hinton in 2012 was the coming out party for CNNs in the computer vision community. This was the first time a model performed so well on a historically difficult ImageNet dataset. Utilizing techniques that are still used today, such as data augmentation and dropout, this paper really illustrated the benefits of CNNs and backed them up with record breaking performance in the competition.

With AlexNet stealing the show in 2012, there was a large increase in the number of CNN models submitted to ILSVRC 2013. The winner of the competition that year was a network built by Matthew Zeiler and Rob Fergus from NYU. Named ZF Net, this model achieved an 11.2% error rate. This architecture was more of a fine tuning to the previous AlexNet structure, but still developed some very keys ideas about improving performance. Another reason this was such a great paper is that the authors spent a good amount of time explaining a lot of the intuition behind ConvNets and showing how to visualize the filters and weights correctly.

In this paper titled “Visualizing and Understanding Convolutional Neural Networks”, Zeiler and Fergus begin by discussing the idea that this renewed interest in CNNs is due to the accessibility of large training sets and increased computational power with the usage of GPUs. They also talk about the limited knowledge that researchers had on inner mechanisms of these models, saying that without this insight, the “development of better models is reduced to trial and error”. While we do currently have a better understanding than 3 years ago, this still remains an issue for a lot of researchers! The main contributions of this paper are details of a slightly modified AlexNet model and a very interesting way of visualizing feature maps.

The basic idea behind how this works is that at every layer of the trained CNN, you attach a “deconvnet” which has a path back to the image pixels. An input image is fed into the CNN and activations are computed at each level. This is the forward pass. Now, let’s say we want to examine the activations of a certain feature in the 4th conv layer. We would store the activations of this one feature map, but set all of the other activations in the layer to 0, and then pass this feature map as the input into the deconvnet. This deconvnet has the same filters as the original CNN. This input then goes through a series of unpool (reverse maxpooling), rectify, and filter operations for each preceding layer until the input space is reached.

The reasoning behind this whole process is that we want to examine what type of structures excite a given feature map. Let’s look at the visualizations of the first and second layers.

Like we discussed in Part 1, the first layer of your ConvNet is always a low level feature detector that will detect simple edges or colors in this particular case. We can see that with the second layer, we have more circular features that are being detected. Let’s look at layers 3, 4, and 5. 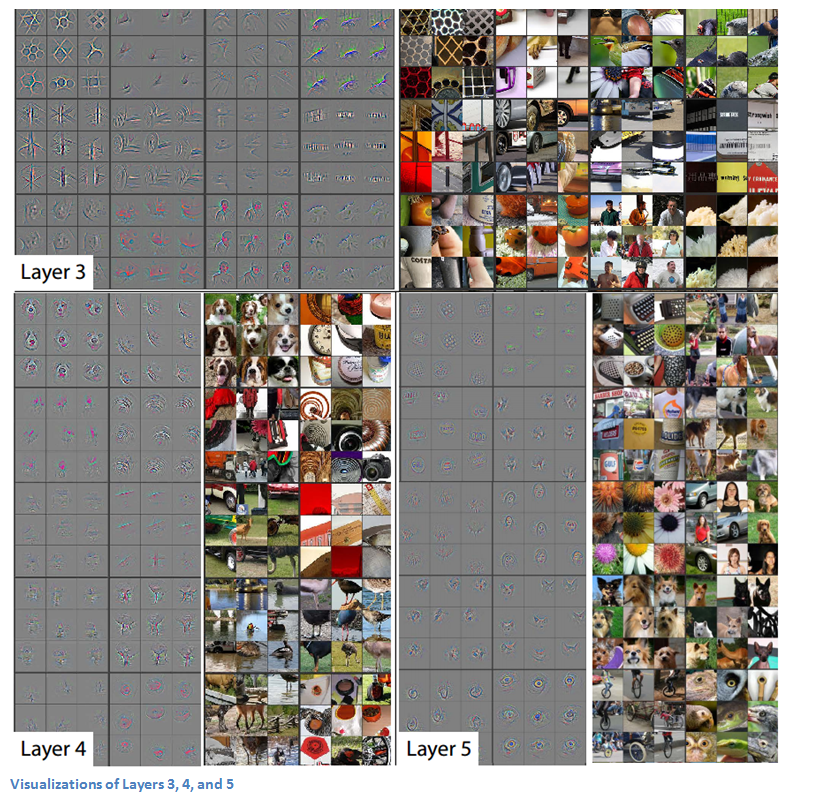 These layers show a lot more of the higher level features such as dogs’ faces or flowers. One thing to note is that as you may remember, after the first conv layer, we normally have a pooling layer that downsamples the image (for example, turns a 32x32x3 volume into a 16x16x3 volume). The effect this has is that the 2nd layer has a broader scope of what it can see in the original image. For more info on deconvnet or the paper in general, check out Zeiler himself presenting on the topic.

ZF Net was not only the winner of the competition in 2013, but also provided great intuition as to the workings on CNNs and illustrated more ways to improve performance. The visualization approach described helps not only to explain the inner workings of CNNs, but also provides insight for improvements to network architectures. The fascinating deconv visualization approach and occlusion experiments make this one of my personal favorite papers.