PLOTCON, Largest Data Visualization Event of its kind, Oakland, May 2-5

For data scientists, journalists, and business analysts, PLOTCON is THE opportunity to meet the creators of the tools you use everyday, ask questions, hear where the future is heading, and be part of the conversation. Use code KDNUGGETS to save. 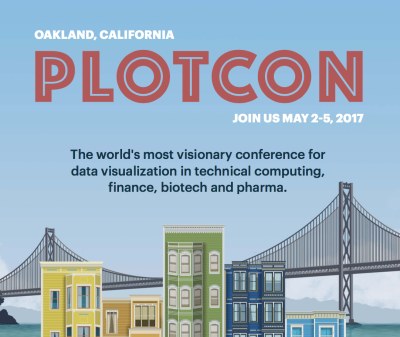 PLOTCON the largest data visualization event of its kind. Brough to you by Plot.ly. They oversold the conference in NYC last November and are expecting about 500-1000 people in Oakland May 2-5th. Most of whom will be data scientists and developers.

PLOTCON is the one conference that brings programmers from today's popular data science languages (Python, R, MATLAB, Julia) to the same table as the Web programmers that are increasingly fueling data visualization technology (D3.js, WebGl, stack.gl, React.js) and accelerate the bleeding edge technology.

For data scientists, journalists, and business analysts, PLOTCON is THE opportunity to meet the creators of the tools you use everyday, ask questions, hear where the future is heading, and be part of the conversation.

Use code KDNUGGETS for 20% off.

NICOLAS BELMONTE (GitHub), is the Head of Visualization at Uber. He and his team help enhance people's ability to understand and communicate data at Uber through the design and implementation of interactive systems for data visualization and analysis. prior to Uber he as at Twitter where he led interactive.twitter.com: a platform which generated interactive visualizations for News, Government, Brand Strategy, Sales, Sports and Music teams and was responsible for our public-facing data visualization work.

MAXIME BEAUCHEMIN (GitHub) joined Airbnb as a data engineer developing tools to help streamline and automate data-engineering processes and was an early adopter of Hadoop/Pig while at Yahoo in 2007. At Facebook, he developed analytics-as-a-service frameworks around engagement and growth-metrics computation, anomaly detection, and cohort analysis. He's a father of three, and in his free time, he's a digital artist. You can read more about his projects on his blog, Digital Artifacts.

SYLVAIN CORLAY (GitHub) is an applied mathematician specializing in stochastic analysis and optimal control. He holds a PhD in applied mathematics from University Paris VI. As an open source developer, Sylvain contributes to Project Jupyter in the area of interactive widgets for the notebook, and is steering committee member of the Project. Besides Jupyter, Sylvain contributes to a number of scientific computing open-source projects such as bqplot, xtensor and ipyleaflet.

Sylvain founded QuantStack in September 2016. Prior to founding QuantStack, Sylvain was a quant researcher at Bloomberg and an adjunct faculty member at the Courant Institute and Columbia University.

Carson Sievert, the lead developer of the Plotly package for R will be hosting a workshop.

Carson will walk you through the Plotly R package in RStudio and R Shiny.

Topics to be covered: Bring your own Plotly/R projects to get help and feedback from the creators of the package.

More details here. The workshop will be based on Carson's Plotly for R book.

We look forward to seeing you there in May!