Read the second article in this series on Transfer Learning, and learn how to apply it to Image Recognition and Natural Language Processing.

By Nisha Arya, KDnuggets on January 14, 2022 in Machine Learning

If you had the chance to read Part 1 of this article, you will remember that Transfer Learning is a machine learning method where the application of knowledge obtained from a model used in one task, can be reused as a foundation point for another task.

If you did not get the chance and don’t have a great understanding of Transfer Learning, give it a read it will help you understand this article much better.

So let's first go through what Image Recognition is. Image Recognition is the task assigned to computer technology to be able to detect and analyse an object or a feature in an image or video. It is the major area where deep neural networks work their magic as they are designed to recognise patterns.

So where can you find pre-trained image models?

There are a lot of pre-trained models out there, so finding the right one to solve your problem will require a little bit of research. I’m going to do a bit of the research for you. I will start by talking about Keras. Keras offers a wide range of pre-trained models that can be used for transfer learning, feature extraction, fine-tuning, and prediction. You can find a list of them here.

An example of a Keras application is the Xception architecture, which I spoke about briefly further up. This is how you can initialise Xception on ImageNet.

As we speak about Keras, let’s not forget about TensorFlow Hub. TensorFlow is an open-source library developed by Google, which supports machine learning and deep learning. TensorFlow Hub has a variety of pre-trained, ready-to-deploy models such as image, text, video, and audio  classification.

A Sequential model is good to use for a plain stack of layers, this entails when each layer has one input and one output tensor.

Within deep learning, some strategies can allow one to gain maximum benefit from pre-trained models.

The first strategy I will speak on is Feature Extraction. You essentially run the pre-trained model as a fixed feature extractor, using the desired features to train a new classifier. Convolutional layers nearer to the input layer of the model learn low-level features such as edges and lines in image recognition. As the layers go on, they start to learn more complex features to then eventually be able to interpret specific features closer to the output, which is the classification task at hand. We can use the different layer levels as a separate feature extraction integration by using portions of the model to classify our task.

For example, if the task differs from classifying objects in an image which the pre-trained model does, using the output after the pre-trained model has gone through a few layers would be more appropriate. Therefore, the new output of the desired layer will be fed as the input to a new model has gained essential features to pass into the new classifier and be able to solve the task at hand.

Overall, the idea is to leverage the pre-trained model using feature extraction to determine which features are useful to solve your task, but you will not use the output of the network as it is too task-specific. You will then have to build the last part of the model to be specific to your task.

The second strategy is Fine-tuning, or what I like to call network surgery. We spoke about Fine-tuning above, where it is built on making “fine” adjustments to a process to obtain the desired output to further improve performance. Fine-tuning is also seen as a further step to Feature Extraction. In fine-tuning we freeze certain layers and selectively re-train some to improve its accuracy, gaining a higher performance at a lower learning rate and requiring less training time.

Fine-tuning is vital if you want to be able to obtain efficient feature representation from the base model, thus being more catered to your task at hand.

Example: How to use a pre-trained image model in Keras

So now let’s look at an example. Since we’ve been speaking so much about cats and dogs, let’s do an Image recognition example on them.

So let's first make sure we import the libraries that we need and load the Data.

It is always good to print out your sample size for your training and test to understand how much data you are working with and have a gander with the images, so you can have a look at what data you’re working with. 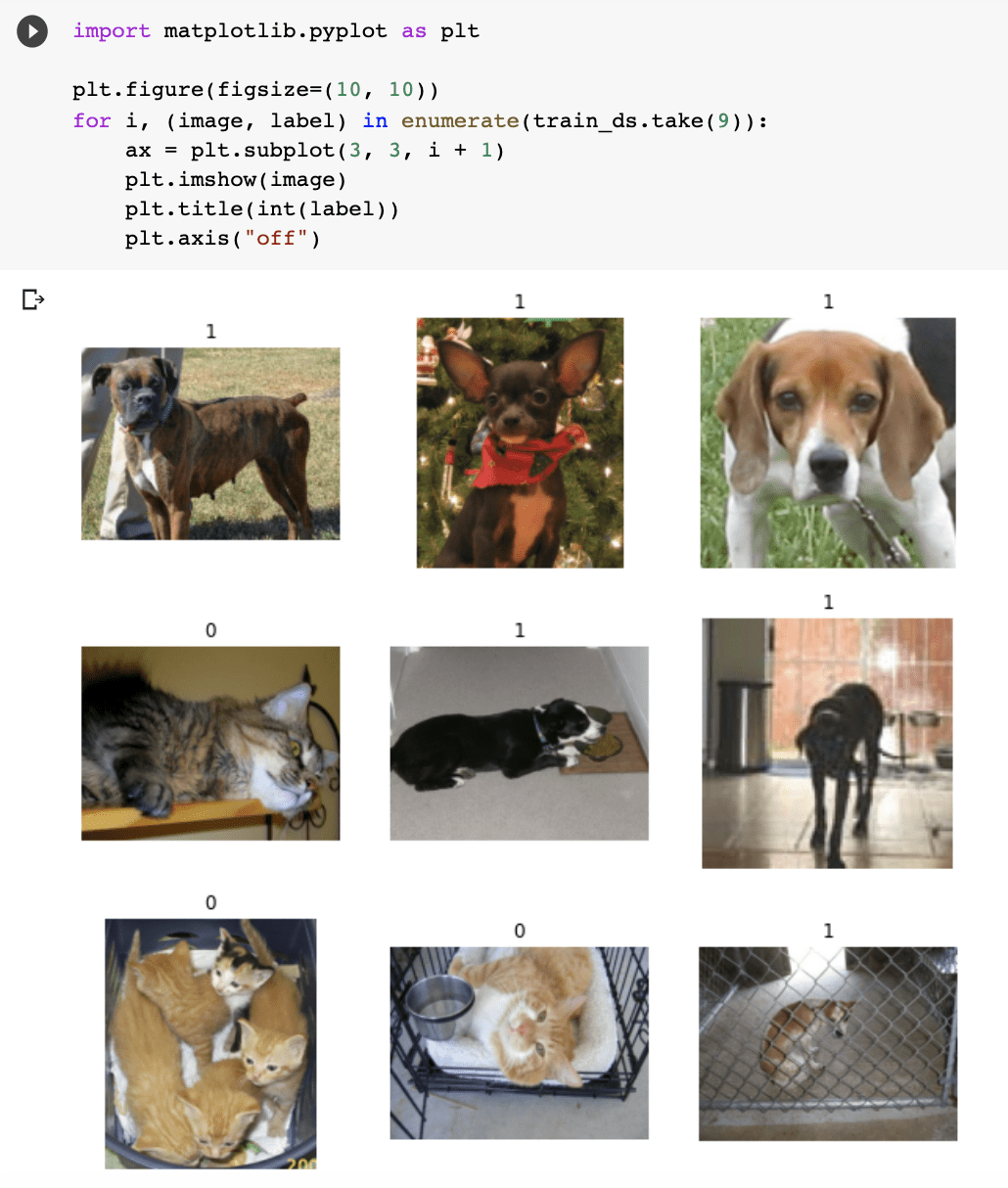 Due to images varying in size, it is a good approach to standardise to fixed image size, as it's a good consistent input for the neural network.

Now let’s go into Data Augmentation. When working with a smaller dataset, it is good practice to apply random transformation to the training images, such as horizontal flipping. Flipping means rotating an image on a vertical or horizontal axis. This will help expose the model to different angles and aspects of the training data, reducing overfitting.

The next step is creating the model. We are first going to start with instantiating a base model, Xception, and loading pre-trained weights into it. In this example, we are using ImageNet. We then move on to freezing all the layers in the base model. Freezing helps to prevent the weights from being updated during training.

The next step is creating a new layer on top of the frozen layers, which will learn its knowledge of the old features and use that to determine predictions on the new dataset. This is beneficial as explained further up in the steps of transfer learning, the likelihood that the current output on the pre-trained model and the output you want from your model will be different is high, therefore adding new layers will improve the model overall.

If you would like to have a further gander, you can do so by clicking here to view the Colab notebook.

We’ve spoken quite a bit about image classification, let’s now look into Natural Language Processing (NLP). So what is NLP? NLP is the ability of a computer to be able to detect and understand human language, through speech and text just the way we humans can.

The human language contains many ambiguities that cause difficulty in being able to create software that can accurately detect speech and text. For example, sarcasm, grammar, and homophones, however, these are just a few bumps in learning the human language.

Examples of NLP are Speech Recognition and Sentiment Analysis. Use cases of NLP are things like spam detection. I know, you may have never thought of NLP being implemented into spam detection, but it is. NLP’s text classification has the ability to scan emails and detect language that indicates that it could be spam or phishing. It does this by analysing the overuse of bad grammar, threats, overuse of financial terminology, and more.

So how does Transfer Learning work in NLP? Well, it basically works the same with Image Recognition. Training a natural language model can be quite hefty in price, it requires a lot of data and takes up a lot of training time on fancy hardware. But the good news is that, just like image recognition, you can download these pre-trained models for free along with fine-tuning them to work on your specific dataset.

Where can you find these pre-trained models, you ask?

Keras does not only offer pre-trained models for Image recognition, it also provides architectures for NLP. You can have a gander here.

Let’s look into HuggingFace. HuggingFace is an open-source provider of natural language processing (NLP) which has done an amazing job to make it user-friendly.

Their Transformers library is a python-based library that provides architectures such as BERT, that perform NLP tasks such as text classification and question answering. All you have to do is load their pre-trained models with just a few lines of code and you are ready to start experimenting. To get started with Transformers, you will need to install it.

Below is an example of using sentiment analysis, which is the ability to be able to identify an opinion expressed in a piece of text.

To find out more about HuggingFace, you can follow this link.

How about Word Embedding? What’s that? Word embedding is a representation in which similar words have a similar encoding. It can be able to detect a word in a document and link its relation to other words.

An example of this is Word2Vec, which is a two-layer neural network that processes texts by vector encoding.

Feature extraction is a strategy used in Word Embedding, where it detects and produces feature representations that are useful for the type of NLP task you are trying to work on. In feature extraction, parts (sentences or words) are extracted to a matrix that has a representation of every word given of every word. The weights do not change and only the top layer of the model is used.

However, fine-tuning tweaks the pre-trained model’s weights, which can be a detriment as the method can cause a loss in words in the adjustment phase, due to the weights being changed and what was once learned, is no longer in the memory. This is known as ‘catastrophic interference’.

Example: How to use a pre-trained NLP model in Keras

We were just speaking on Word Embedding, so let’s look at an example. To quickly recap what Word Embedding is: it is a representation in which similar words have a similar encoding. It can be able to detect a word in a document and link its relation to other words. So let’s see how this works then.

In this example, we are going to look at movie reviews. If you remember the example we did above, using sentiment analysis, produced us an output determining how positive it was. With these movie reviews, we have positive and negative, therefore this is binary classification.

You can see the distinction in the below image, 0 being negative and 1 being positive.

I then moved on to using Embedding Layer from Keras, to turn positive integers into dense vectors with fixed sizes. The weights for the embedding are randomly initialised and are adjusted during backpropagation. Once the knowledge is learnt, the word embeddings will encode similarities between words they have learnt and words they had learnt before.

The vectorize_layer from the above pre-processing will be implemented as the first layer into the model, as it has transformed the strings into vocabulary indices. It will feed the transformed strings into the Embedding layer.

The Embedding layer then takes these vocabulary indices and scans through the vector for each word index, where they are learning as the model trains.

In this example, we are going to use TensorBoard, which is a tool for providing visualisations showing machine learning workflow, for example loss and accuracy.

We are going to compile the model using the Adam optimizer and BinaryCrossentropy loss.

I mentioned the TensorBoard, which visualises the models metrics and you can see this below. 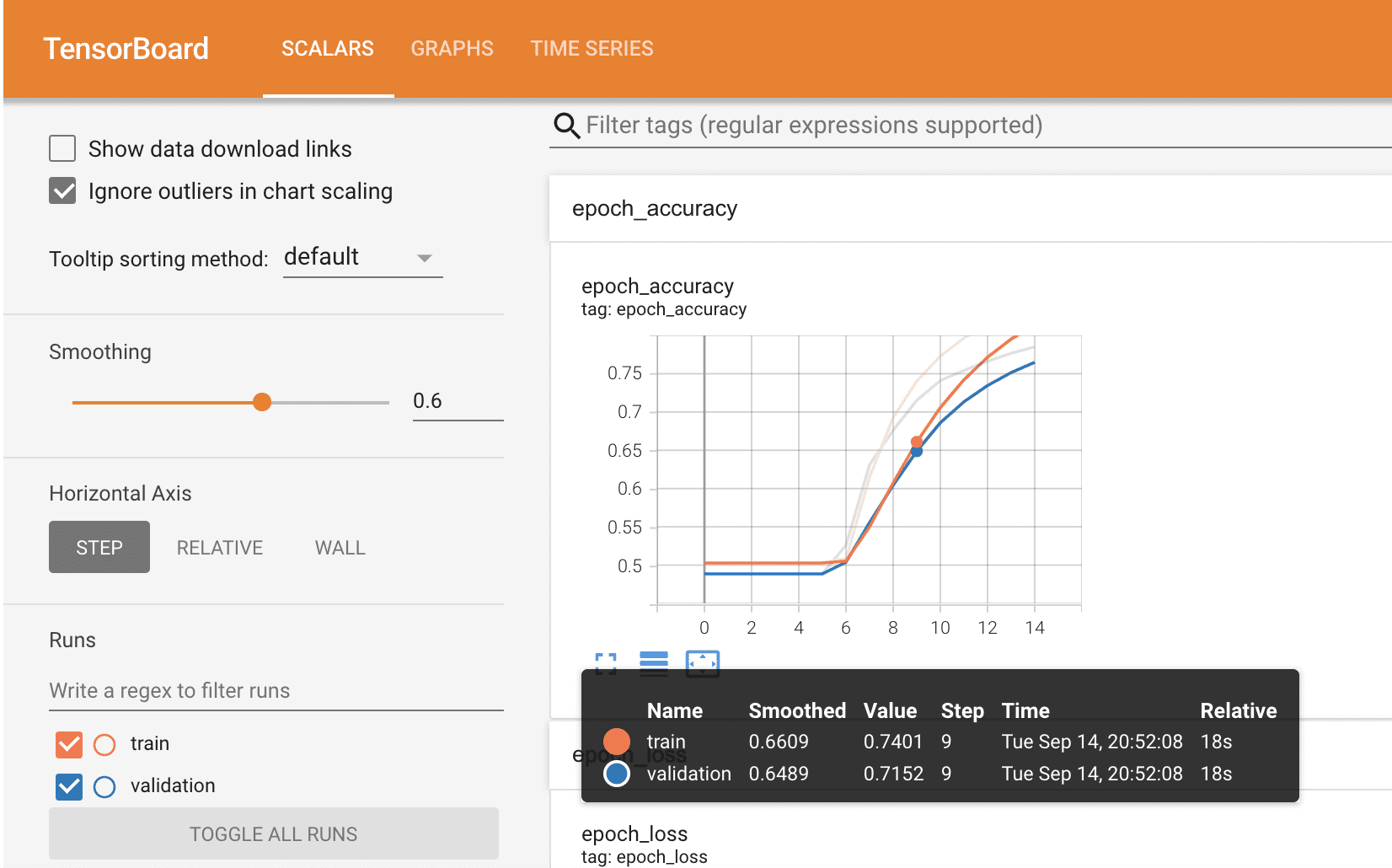 You have seen how to train and test an NLP model using a pre-trained word embedding model. If you would like to have a further look at the Colab notebook, you can do so here.

What are the best practices with transfer learning?

I hope this article has given you a better understanding of how to implement transfer learning through types of Machine Learning. Try it out for yourself!