Why Use k-fold Cross Validation?

Generalizing things is easy for us humans, however, it can be challenging for Machine Learning models. This is where Cross-Validation comes into the picture.

By Nisha Arya, KDnuggets on July 11, 2022 in Machine Learning 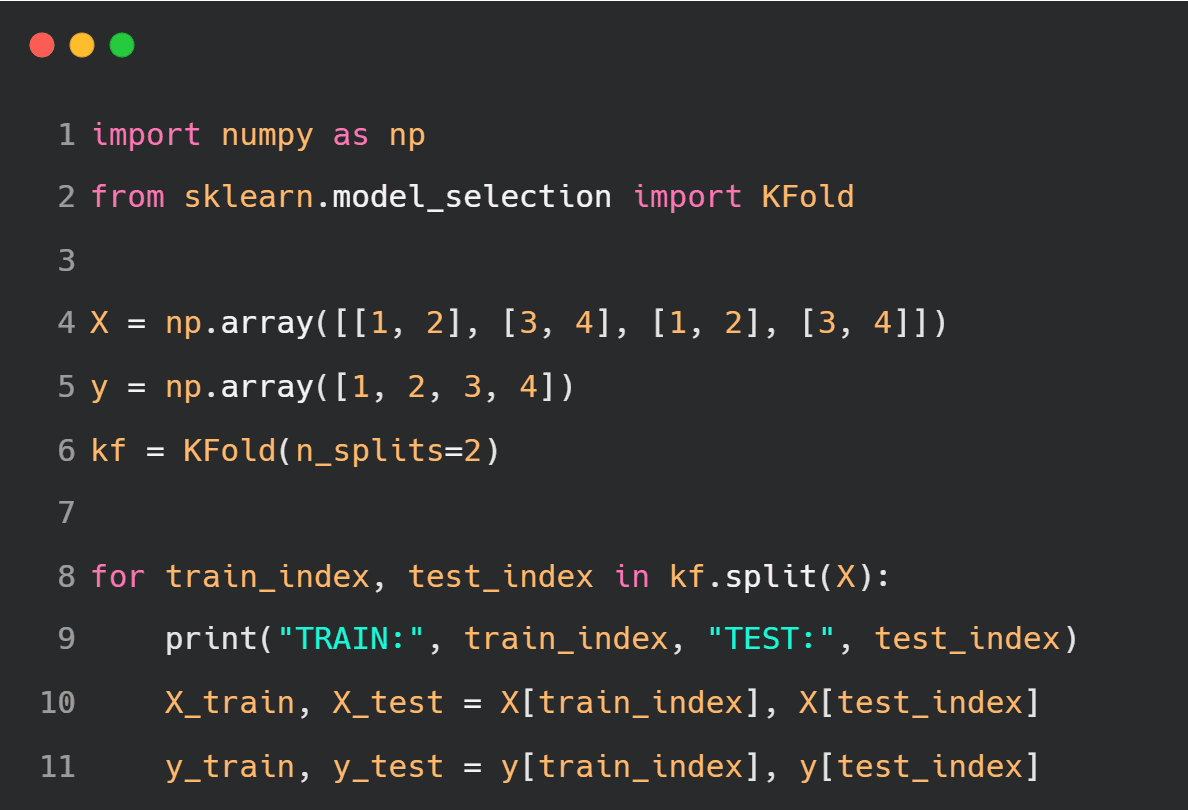 Generalization is a frequent term that is used in conversations about Machine Learning. It refers to how able the model can adapt to new, unseen data and how it works effectively using various inputs. It is understandable to say that if new unseen data is inputted into a model, if this unseen data has similar characteristics to the training data, it will perform well.

Generalizing things is easy to us humans, however it can be challenging to Machine Learning models. This is where Cross-Validation comes into the picture.

You may see cross-validation also being referred to as rotation estimation and/or out-of-sample testing. The overall aim of Cross-Validation is to use it as a tool to evaluate machine learning models, by training a number of models on different subsets of the input data.

Cross-validation can be used to detect overfitting in a model which infers that the model is not effectively generalizing patterns and similarities in the new inputted data.

In order to perform cross-validation, the following steps are typically taken:

There are different types of Cross-Validation techniques

However, we will be particularly focusing on K-folds.

K-fold Cross-Validation is when the dataset is split into a K number of folds and is used to evaluate the model's ability when given new data. K refers to the number of groups the data sample is split into. For example, if you see that the k-value is 5, we can call this a 5-fold cross-validation. Each fold is used as a testing set at one point in the process.

You can easily implement this using sklearn.model_selection.KFold

Why Should I Use K-fold Cross-Validation?

Make use of your data

We have a lot of readily available data that can explain a lot of things and help us identify hidden patterns. However, if we only have a small dataset, splitting it into a training and test dataset at a 80:20 ratio respectively doesn’t seem to do much for us.

However, when using K-fold cross validation, all parts of the data will be able to be used as part of the testing data. This way, all of our data from our small dataset can be used for both training and testing, allowing us to better evaluate the performance of our model.

Let’s refer back to the example of splitting your dataset into training and testing as a 80:20 ratio or a train-test split - this provides us with only one result to refer to in our evaluation of the model. We are not sure about the accuracy of this result, if it’s due to chance, the level of bias, or if it actually performed well.

However, when using k-fold cross validation, we have more models that will be producing more results. For example, if we chose our k value at 10, we would have 10 results to use in our evaluation of the model's performance.

You would have more trust and confidence in your model's performance if the accuracy outputs were 94.0, 92.8, 93.0, 97.0, and 94.5 in a 5-fold cross validation than a 93.0 accuracy in a train-test split. This proves to us that our algorithm is generalizing and actively learning and is providing consistent reliable outputs.

Yes this does improve the accuracy and boost the performance of the algorithms, however, what about when a new speaker is introduced to the model? How does the model perform then?

Using K-fold cross validation will allow you to train 5 different models, where in each model you are using one of the speakers for the testing dataset and the remaining for the training dataset. This way, not only can we evaluate the performance of our model, but our model will be able to perform better on new speakers and can be deployed in production to produce similar performance for other tasks.

Why is 10 Such a Desirable k value?

Choosing the right k-value is important as it can affect your level of accuracy, variance, bias and cause you to misinterpreted the overall performance of your model.

The simplest way to choose your k value is by equating it to your ‘n’ value, also known as leave-one-out cross-validation. n represents the size of the dataset which allows for each test sample the opportunity to be used in the test data or hold out data.

However, through various experimentations from Data Scientists, Machine Learning Engineers, and Researchers they have found that choosing a k-value of 10 has proven to provide a low bias and a modest variance.

Kuhn & Johnson spoke about their choice of k value in their book Applied Predictive Modeling.

Let’s take this context and put it in an example:

So therefore, as the value of k increases, the difference between the original data set and the cross-validation subsets becomes smaller.

Cross-Validation is an important tool that every Data Scientist should be using or very proficient in at least. It allows you to make better use of all your data as well as providing Data Scientists, Machine Learning Engineers and Researchers with a better understanding of the performance of the algorithm.

Having confidence in your model is important to future deployment and trust that the model will be effective and perform well.