10 Most Influential People in Data Analytics

Jiang (Jay) Zhou, Ph.D., author of Deep Data Mining blog, has come up with a list of 10 most influential people whose significant contributions have greatly enriched the data analytics community. 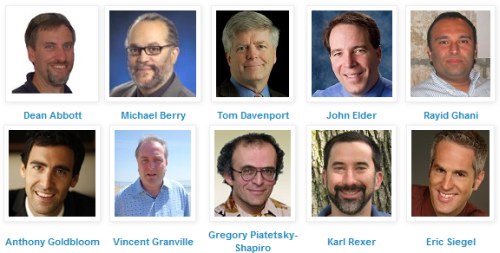 These 10 people, in alphabetical order of their last name, are

Most of them (except Dean, Antony, and Michael) are Ph.Ds. See more details and description of their contribution at

To select 10 most influential people in data analytics, the following considerations are taken into account regarding an individual's contribution.

I performed online research first to find qualified people. KDnuggets.com, other websites of social networking, data analytics conferences, consulting firms, and Amazon are just a few examples of good sources for information. I also took advantage of my own network. Being in the industry for 15 years, I have known many great data analytics professionals. They provided me with many names of qualified people. After I compiled a preliminary list, I sent it to a number of experts for their feedback. The final list was the result of several iterations.