You don't have to be a climatologist to empirically confirm global warming. It is enough to have a computer, a reliable data set of historical temperatures, and software like R to do simple calculations.

Global warming is real. Winters come later and milder and summers come sooner and hotter. Many people and many species are being affected by the climate change. Scientists have made it clear that human activity is the main cause of this change and warn that damages caused so far (rise of sea levels, acidification of the oceans, melting of glaciers) will remain for centuries if governments don't take drastic measures to counteract global warming.

The Intergovernmental Panel on Climate Change (IPCC) is the leading international body for the assessment of climate change. It was established by the United Nations Environment Programme (UNEP) and the World Meteorological Organization (WMO) in 1988 to provide the world with a clear scientific view on the current state of knowledge in climate change and its potential environmental and socio-economic impacts. These are some of their last forecasts (1):


Is not necessary being a climatologist to confirm empirically global warming. It is enough to have a computer, a reliable data set of historical temperatures, and software like R to do some simple calculations. The European Climate Assessment & Dataset Project (ECA) site provides information on changes in weather and climate extremes, as well as the daily dataset needed to monitor and analyze these extremes. The ECA dataset contains series of daily observations at more than 2.500 meteorological stations throughout Europe. There are observations from the late 18th century to the present, although not all stations have records for the complete period.

It is easy to obtain a rough idea of the evolution of global temperature measuring the linear trend of the average temperature recorded by each station. This is the distribution of the meteorological stations according to this historical trend: 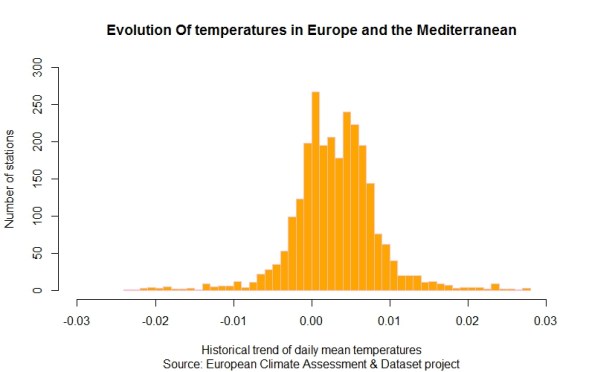 The distribution is significantly centered above zero: here we have the effect of global warming. Since ECA dataset provides geographical coordinates for every station, is also easy to locate in a map those with the highest trends. To do it I use the amazing googleVis R package: 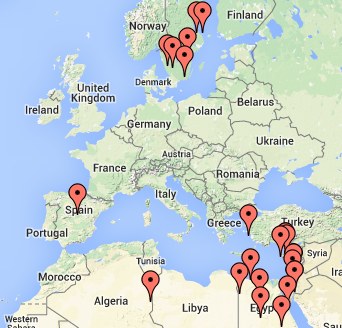 Click on the image above to open interactive data visualization

One of these stations is located in In Amenas (Algeria). These are the temperatures registered by this station from 1958 to 1998: 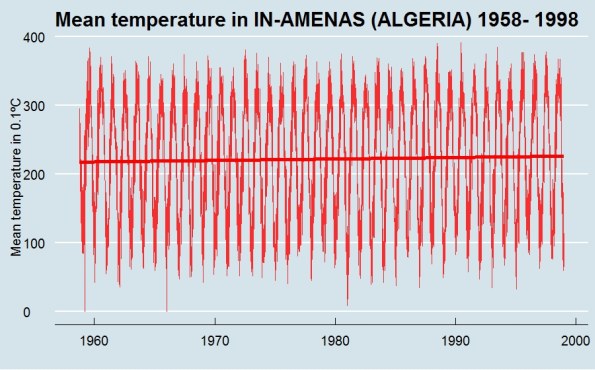 The rise, although very gradual, is palpable.

Some days ago I read an interview with Bjorn Stevens, director at the Max-Planck-Institute for Meteorology where he leads the Atmosphere in the Earth System Department. He says, the big challenge is to require our politicians to learn from the best available knowledge: there is understandable information available to whoever wants to know.

Let’s hope they do.

Bio: Antonio Sánchez Chinchón is mathematician and works as data scientist at Telefónica. He is the creator of Ripples, an unclassifiable blog of mathematical experiments and R programming. You can follow him in @aschinchon