Top 10 data mining algorithms, selected by top researchers, are explained here, including what do they do, the intuition behind the algorithm, available implementations of the algorithms, why use them, and interesting applications.

Today, I’m going to explain in plain English the top 10 most influential data mining algorithms as voted on by 3 separate panels in this survey paper.

Once you know what they are, how they work, what they do and where you can find them, my hope is you’ll have this blog post as a springboard to learn even more about data mining.

What are we waiting for? Let’s get started! 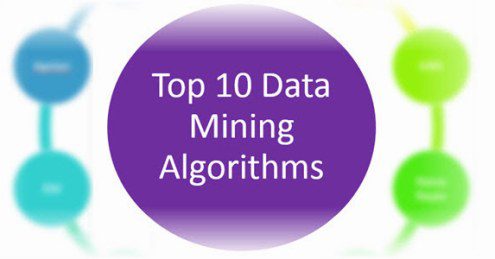 Here are the algorithms:

We also provide interesting resources at the end.

What does it do? C4.5 constructs a classifier in the form of a decision tree. In order to do this, C4.5 is given a set of data representing things that are already classified.

Wait, what’s a classifier? A classifier is a tool in data mining that takes a bunch of data representing things we want to classify and attempts to predict which class the new data belongs to.

What’s an example of this? Sure, suppose a dataset contains a bunch of patients. We know various things about each patient like age, pulse, blood pressure, VO2max, family history, etc. These are called attributes.

And here’s the deal:

Using a set of patient attributes and the patient’s corresponding class, C4.5 constructs a decision tree that can predict the class for new patients based on their attributes.

Cool, so what’s a decision tree? Decision tree learning creates something similar to a flowchart to classify new data. Using the same patient example, one particular path in the flowchart could be:

The bottom line is:

At each point in the flowchart is a question about the value of some attribute, and depending on those values, he or she gets classified. You can find lots of examples of decision trees.

Is this supervised or unsupervised? This is supervised learning, since the training dataset is labeled with classes. Using the patient example, C4.5 doesn’t learn on its own that a patient will get cancer or won’t get cancer. We told it first, it generated a decision tree, and now it uses the decision tree to classify.

You might be wondering how C4.5 is different than other decision tree systems?

Why use C4.5? Arguably, the best selling point of decision trees is their ease of interpretation and explanation. They are also quite fast, quite popular and the output is human readable.

Where is it used? A popular open-source Java implementation can be found over at OpenTox. Orange, an open-source data visualization and analysis tool for data mining, implements C4.5 in their decision tree classifier.

Classifiers are great, but make sure to checkout the next algorithm about clustering…

What does it do? k-means creates k groups from a set of objects so that the members of a group are more similar. It’s a popular cluster analysis technique for exploring a dataset.

Is there an example of this? Definitely, suppose we have a dataset of patients. In cluster analysis, these would be called observations. We know various things about each patient like age, pulse, blood pressure, VO2max, cholesterol, etc. This is a vector representing the patient.

You can basically think of a vector as a list of numbers we know about the patient. This list can also be interpreted as coordinates in multi-dimensional space. Pulse can be one dimension, blood pressure another dimension and so forth.

Given this set of vectors, how do we cluster together patients that have similar age, pulse, blood pressure, etc?

Want to know the best part?

You tell k-means how many clusters you want. K-means takes care of the rest.

How does k-means take care of the rest? k-means has lots of variations to optimize for certain types of data.

At a high level, they all do something like this:

Is this supervised or unsupervised? It depends, but most would classify k-means as unsupervised. Other than specifying the number of clusters, k-means “learns” the clusters on its own without any information about which cluster an observation belongs to. k-means can be semi-supervised.

Why use k-means? I don’t think many will have an issue with this:

The key selling point of k-means is its simplicity. Its simplicity means it’s generally faster and more efficient than other algorithms, especially over large datasets.

k-means can be used to pre-cluster a massive dataset followed by a more expensive cluster analysis on the sub-clusters. k-means can also be used to rapidly “play” with k and explore whether there are overlooked patterns or relationships in the dataset.

It’s not all smooth sailing:

Two key weaknesses of k-means are its sensitivity to outliers, and its sensitivity to the initial choice of centroids. One final thing to keep in mind is k-means is designed to operate on continuous data — you’ll need to do some tricks to get it to work on discrete data.

Where is it used? A ton of implementations for k-means clustering are available online:

If decision trees and clustering didn’t impress you, you’re going to love the next algorithm.

What does it do? Support vector machine (SVM) learns a hyperplane to classify data into 2 classes. At a high-level, SVM performs a similar task like C4.5 except SVM doesn’t use decision trees at all.

Whoa, a hyper-what? A hyperplane is a function like the equation for a line, y = mx + b. In fact, for a simple classification task with just 2 features, the hyperplane can be a line.

As it turns out…

…SVM figures out the best hyperplane which separates your data into the 2 classes.

Do you have an example? Absolutely, the simplest example I found starts with a bunch of red and blue balls on a table. If the balls aren’t too mixed together, you could take a stick and without moving the balls, separate them with the stick.

When a new ball is added on the table, by knowing which side of the stick the ball is on, you can predict its color.

And the coolest part?

SVM figures out the function for the hyperplane.

What if things get more complicated? Right, they frequently do. If the balls are mixed together, a straight stick won’t work.

Nope, lifting up the table is the equivalent of mapping your data into higher dimensions. In this case, we go from the 2 dimensional table surface to the 3 dimensional balls in the air.

I found this visualization super helpful:

Reddit also has 2 great threads on this in the ELI5 and ML subreddits.

How do balls on a table or in the air map to real-life data? A ball on a table has a location that we can specify using coordinates. For example, a ball could be 20cm from the left edge and 50cm from the bottom edge. Another way to describe the ball is as (x, y) coordinates or (20, 50). x and y are 2 dimensions of the ball.

If we had a patient dataset, each patient could be described by various measurements like pulse, cholesterol level, blood pressure, etc. Each of these measurements is a dimension.

The bottom line is:

SVM does its thing, maps them into a higher dimension and then finds the hyperplane to separate the classes.

SVM attempts to maximize the margin, so that the hyperplane is just as far away from red ball as the blue ball. In this way, it decreases the chance of misclassification.

Where does SVM get its name from? Using the ball and table example, the hyperplane is equidistant from a red ball and a blue ball. These balls or data points are called support vectors, because they support the hyperplane.

Is this supervised or unsupervised? This is a supervised learning, since a dataset is used to first teach the SVM about the classes. Only then is the SVM capable of classifying new data.

Why use SVM? SVM along with C4.5 are generally the 2 classifiers to try first. No classifier will be the best in all cases due to the No Free Lunch Theorem. In addition, kernel selection and interpretability are some weaknesses.

Where is it used? There are many implementations of SVM. A few of the popular ones are scikit-learn, MATLAB and of course libsvm.

The next algorithm is one of my favorites…