We are introducing you to the new deep learning framework “DeepLearningKit”, for the Apple based OS which is developed in Metal and Swift.

Happy to announce that a(early) version of DeepLearningKit is available on: 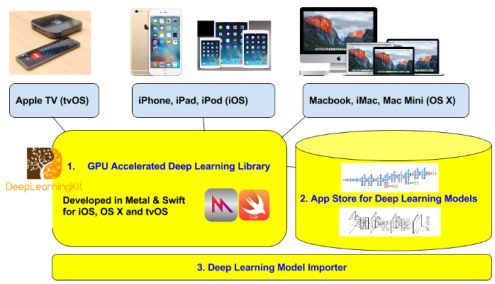 It currently allows using deep convolutional neural networks model trained in Caffe on Apple’s iOS, OS X and tvOS  (transformed from protobuffers into json with the tool at https://github.com/DeepLearningKit/caffemodel2json – a tutorial about this will come later).

Have a look at Tutorial – Using DeepLearningKit with iOS for iPhone and iPad – it is about using a pre-trained CIFAR-10 Network in Network example.

3. What is DeepLearningKit developed in?

It is developed in Metal (for GPU Acceleration) and Swift (for app integration). I believe DeepLearningKit is the first (public) Deep Learning tool that is using the Metal compute API for GPUs (Metal is Apple’s recommended way to program GPUs)

More tutorials and a paper describing DeepLearningKit will be made available on http://deeplearningkit.org (+ http://arxiv.org for the paper)

5. I love developing for Apple’s [iOS,OS X or tvOS] and would like to contribute to this project, how?

Here are a few thoughts:

6. Is DeepLearningKit production ready for my mission critical app?

most likely not, but that doesn’t stop you from testing it out?

7. DeepLearningKit reminds me more about CUDA/GPU Libraries such as Nvidia’s cuDNN or  Facebook’s fbCunn rather than larger tools such as Torch, TensorFlow and Caffe, is that right?

You’re right, DeepLearningKit can be roughly seen as an early “metalDNN” with Swift packaging for loading and running models. (It currently doesn’t support Fast Fourier-based convolution such as Facebook’s fbcunn)

8. Who Developed and Open Sourced DeepLearningKit