The Difference Between Data Scientists and Data Engineers

ODSC East 2019 has multiple tracks for both Data Scientists and Data Engineers, including workshops, talks, and training sessions. Save 45% with code KDN45. 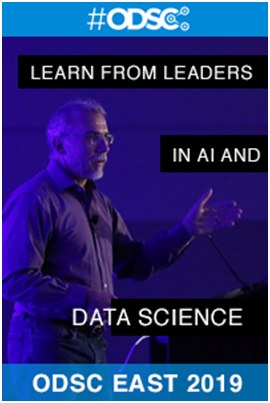 As the field of machine intelligence continues to expand, new roles are being created and existing ones are expanding. Many people don’t have a clear understanding of the difference between data scientists and data engineers. The articles addressed the specific skill sets required for these two distinct career paths.

Here are some of the core competencies of data scientists and data engineers along with overlapping areas:

Let’s dive down into these areas to better understand the differentiators:

Data scientists generally come from an applied mathematics and/or statistics background coupled with computer science. Machine learning is based on the mathematical foundations of statistical learning. Trying to excel in data science without mathematics knowledge will lead to an incomplete perspective.

Data scientists will also have the background to choose appropriate machine learning algorithms, train them, and devise methods for testing their accuracy.

Additionally, data scientists must be well-versed in the art of data storytelling when the results of a data science project need to be conveyed to the business stakeholders in an understandable fashion. This effort requires the ability to verbally and visually communicate complex results and observations in a way that the stakeholder can understand and act on them.

Data scientists will have also developed coding skills out of necessity, most settling on either the R or Python language environments. The programming skills of a data scientist aren’t typically at the level that you’d see for a data engineer – nor should they be!

Data engineers come from a programming background, possibly as a result of a computer science degree. Their background is generally in languages like Python, Java, or Scala. Their emphasis is with distributed systems and big data. Compared to data scientists, their programming skills are more advanced and specifically suited for building high-availability production systems.

Data engineers also implement machine learning algorithms chosen by data scientists for a production environment. For example, this may involve deploying a classification algorithm used by the data scientist in R to a more robust production platform.

Another area of overlap is with data analytics. The data scientist’s analytics skills are usually much more evolved than the analytic skills of a data engineer. Data engineers may be able to do some basic analytics but would not be able to address the needs of more advanced analytics that a data scientist would easily do.

Misalignments in the Enterprise

Many enterprises make mistakes with respect to aligning the above skillsets with the actual job title. First and foremost, don’t fall into the rabbit hole of trying to find one person, known as a unicorn, who can do the job of both data scientist and data engineer. Sure, there may be a few unicorns out there, but they’re in very high demand and command a very high salary. Plus, what happens if you hire a unicorn and they decide to leave?

Another mistake is having data scientists do the work of a data engineer. Creating a data pipeline is not easy and it requires advanced knowledge of production programming frameworks. A data scientist may be able to acquire these skills, but this is not the most efficient use of this resource. Data scientists are not engineers who build production systems, create data pipelines, and expose machine learning results.

On the flip side, it is a mistake having data engineers do the work of a data scientist, although this is far less common. Some data engineers work to widen their skills by improving their mathematics and statistics knowledge, and correspondingly their machine learning skills. This career path sometimes results in yet another job category, the “machine learning engineer.”

How do I advance my skills?

At ODSC East 2019, we have entire focus areas spanning multiple tracks around both these areas.  ODSC workshops, talks, and training sessions are idea for either or both types of data science professionals, whether you’re a data scientist or a data engineer! Here are a few standout sessions you may want to review pick from our data science and data engineering focus areas:

Ready to learn skills for both data scientists and data engineers? Attend ODSC East and Save 45% with Code KDN45 - April 30-May 3 in Boston.