We provide an in-depth introduction to Random Forest, with an explanation to how it works, its advantages and disadvantages, important hyperparameters and a full example Python implementation.

By The Learning Machine

This article is written by The Learning Machine, a new open-source project that aims to create an interactive roadmap containing A-Z explanations of concepts, methods, algorithms and their code implementations in either Python or R, accessible for people with various backgrounds.

One of the common problems with decision trees, especially the ones that have a table full of columns, is that they tend to overfit a lot. Sometimes it looks like the tree just memorizes the data. Here are the typical examples of decision trees that overfit, both for categorical and continuous data:

If the client is male, between 15 and 25, from the US, likes ice-cream, has a German friend, hates birds and ate pancakes on August 25th, 2012, - he is likely to download Pokemon Go. 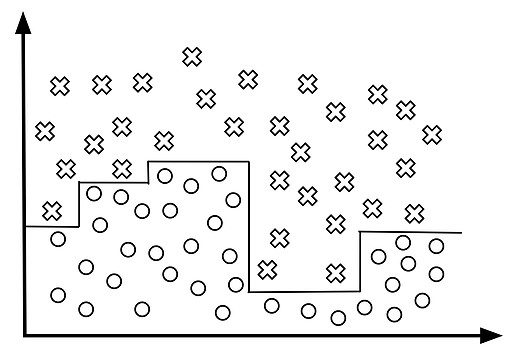 * In case of a regression problem, for a new record, each tree in the forest predicts a value for Y (output). The final value can be calculated by taking the average of all the values predicted by all the trees in a forest. Or, in case of a classification problem, each tree in the forest predicts the category to which the new record belongs. Finally, the new record is assigned to the category that wins the majority vote.

James wants to decide what places he should visit during his one week stay in Paris. He goes to a friend who lived there one year and asks what he visited in the past and if he liked it or not. Based on his experience, he will give James some advice.

This is a typical decision tree algorithm approach. James’ friend decided about what James should visit, based on his personal experience of a year.

Later, James starts asking more and more of his friends to advise him, and they recommend the places they have been to. Then James chooses the places that were recommend the most to him, which is the typical Random Forest algorithm approach.

Thus, Random Forest is an algorithm that builds n decision trees by randomly selecting k out of the total of m features for every decision tree, and takes the mode (average, if regression) of the predicted outcomes.

View/download a template of Random Forest located in a git repository here.