Finding a deep learning model to perform well is an exciting feat. But, might there be other -- less complex -- models that perform just as well for your application? A simple complexity measure based on the statistical physics concept of Cascading Periodic Spectral Ergodicity (cPSE) can help us be computationally efficient by considering the least complex during model selection.

Changing concepts in machine learning due to deep learning

Figure 1. Arbitrary architecture, each node represents a layer for a given deep neural network, such as convolutions or set of units.  Suzen et. al. (2019).

The surge in interest in using complex neural network architectures, i.e., deep learning due to their unprecedented success in certain tasks,  pushes the boundaries of "standard" statistical concepts such as overfitting/overtraining and regularisation.

Now Overfitting/overtraining is often used as an umbrella term to describe any unwanted performance drop off a machine learning model Roelofs et al. (2019), and nearly anything that improves generalization is called regularization, Martin and Mahoney (2019).

Deep learning practitioners completely let go of the model selection steps and omit to practice Occam's razor. With the advent of Neural Architecture Search and new complexity measures that take the structure of the network into account, give rise to the possibility of practicing Occam's razor in deep learning. Here, we would cover one of the very practical and simple measures called cPSE, i.e., cascading periodic spectral ergodicity. This measure takes into account the depth of the neural network and computes fluctuations of the weight structure over the entire network, Suzen et al. (2019), Figure 1. It is shown that the measure is correlated with the generalization performance almost perfectly, see Figure 2.

The cPSE measure is implemented in the Bristol python package, starting from version 0.2.6,  and can be used for a trained network put into a PyTorch model object. 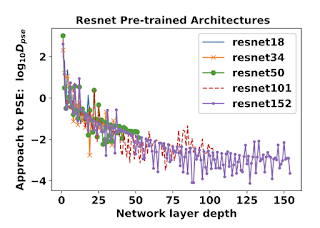 An example of usage requires a couple of lines, example measurements for VGG and ResNet are given at Suzen et al. (2019)

Using a less complex deep neural network that would give similar performance is not practiced by the deep learning community due to the complexity of training and designing new architectures. However, quantifying the complexity of similarly performing neural network architecture would bring the advantage of using less computing power to train and deploy such less complex models into production. Bringing back the Occam's razor to modern connectionist machine learning is not only a theoretical and philosophical satisfaction but the practical advantages for environment and computing time are immense.