Despite the benefits of federated learning, there are still ways of breaching a user’s privacy, even without sharing private data. In this article, we’ll review some research papers that discuss how federated learning includes this vulnerability.

Federated learning is a new way of training a machine learning using distributed data that is not centralized in a server. It works by training a generic (shared) model with a given user’s private data, without having direct access to such data.

For a deeper dive into how this works, I’d encourage you to check out my previous blog post, which provides a high-level overview, as well as an in depth look at Google’s research.

Federated learning has the major benefit of building models that are customized based on a user’s private data, which allows for better customization that can enhances the UX. This, as compared to models trained by the data aggregated at a data center that are more generic and may not fit the user quite as well. Federated learning also help save a user’s bandwidth, since they aren’t sending private data to a server.

Despite the benefits of federated learning, there are still ways of breaching a user’s privacy, even without sharing private data. In this article, we’ll review some research papers that discuss how federated learning includes this vulnerability.

The outline of the article is as follows:

Federated learning was introduced by Google in 2016 in a paper titled Communication-Efficient Learning of Deep Networks from Decentralized Data. It’s a new machine learning paradigm that allows us to build machine learning models from private data, without sharing such data to a data center.

The summary of the steps we take to do this is as follows:

This way, a model is trained using private data without being moved from the devices. The next figure from a post by Jose Corbacho summarizes the previous steps.

Even though the data isn’t shared with the server, the process is not 100% private, and there’s still a possibility of obtaining information about the data used to train the network and calculate the gradients. The next section discusses how privacy is not entirely preserved using federated learning.

Federated learning has some privacy advantages as compared to sharing private data with data centers. The benefits also include the ability to build highly-customized machine learning models based on the user data, while avoiding using hits to a user’s bandwidth for transferring the private data to the server.

Undoubtedly, not sharing the data with data centers and keeping it private is an advantage—but there are still some risks. The reason is that there remains a way to extract some private information from the data.

After the generic model is trained at the user’s device, the trained model is sent to the server. Given that the model’s parameters are trained based on the user’s data, there is a chance of getting information about the data from such parameters.

Moreover, joining the user’s data with data from other users has some risks and this is mentioned in the Google research paper:

Holding even an “anonymized” dataset can still put user privacy at risk via joins with other data.

Here, the seminal paper on federated learning makes it clear that there are still some risks, and data privacy is not 100% guaranteed. Even if the data is anonymized, it’s still vulnerable.

The updates transmitted from the device to the server should be minimal. There’s no need to share more than the minimum amount of info required to update the model at the server. Otherwise, there remains the possibility of private data being exposed and intercepted.

The private data is this vulnerable, even without being sent explicitly to the server because it’s possible to restore it based on the parameters trained by such data. In the worst case when an attacker is able to restore the data, it should be anonymous as much as possible without revealing some user’s private information like the name for example.

It’s possible to reveal the words entered by a user based on the gradients for some simple NLP models. In these case, if the private data already contains some information (i.e. words) about the user, then such words could be restored, and thus the privacy would also not be preserved.

The original paper for federated learning didn’t mention a clear example in which the private data could not be deduced, but it mentioned a case in which it would be difficult (which implies still possible) to extract information about a user’s private data by averaging and summing gradients. The example they include involves revealing information about private data from complex networks like CNNs. Here’s what the paper mentioned:

The sum of many gradients for a dense model such as a CNN offers a harder target for attackers seeking information about individual training instances.

In essence, there’s no way to 100% prevent an attacker from getting information about the samples used for calculating the gradients of a neural network. But the key is making things harder for the attacker to get such information. It’s like a cavern puzzle, where you should make it difficult as possible to solve.

This is the case for a convolutional neural network (CNN) because it usually has many layers connecting the input to the output, resulting in a large number of interleaving gradients. These gradients render it difficult (though attacks are still possible) to find a relationship between the inputs and the outputs based on the available gradients. 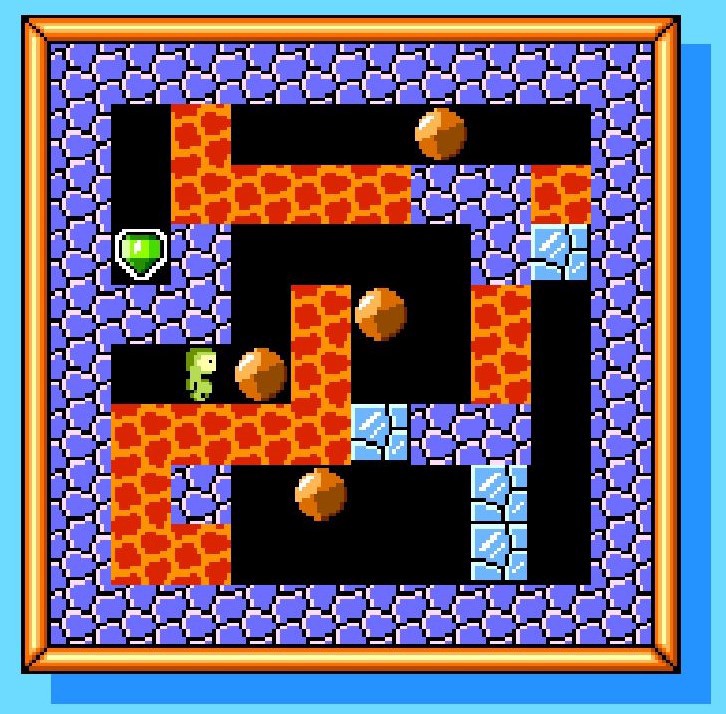 To summarize the previous discussion—even if the private data itself is not shared with the server, the gradients of the trained network are, which makes it possible to extract information about the training samples. The paper discussed 2 main measures you should take to maximize privacy:

The next section summarizes a paper that discusses some specific privacy and security issues related to federated learning.

The paper started by introducing the basic model for federated learning, according to the next figure. This figure shares some similarities to Jose Corbacho’s post. 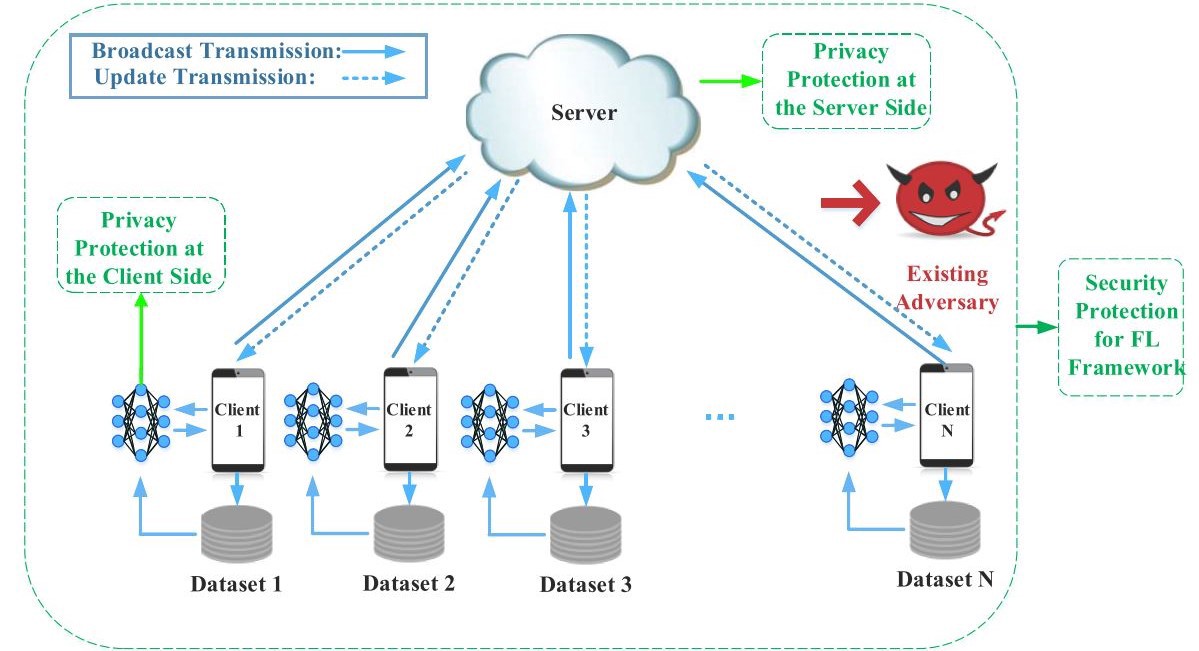 The paper classified the protection methods for the privacy and security issues into 3 categories, which are:

Regarding privacy protection at the client-side, the paper discussed 2 ways which are perturbation and dummy:

After the client trains the model by its private data, the model is sent to the server. At this time, an attacker might make some changes to the model to make it behave for their benefit. For example, the attacker might control the labels assigned to images with certain features.

The paper suggests 2 ways to secure the design of a federated learning pipeline: homomorphic encryption and back-door defender.

The next section provides a quick summary of a paper that is able to reconstruct images by inverting gradients.

According to a recent research paper—Geiping, Jonas, et al. “Inverting Gradients — How easy is it to break privacy in federated learning?” arXiv preprint arXiv:2003.14053 (2020)—simply sharing the gradients but not the private data still uncovers private information about the data. Thus, federated learning has not entirely achieved one of its goals, which is keeping user’s data private.

As we mentioned in the previous section, one thing that makes it harder for an attacker to get information about private data is the existence of many gradients, like those available in CNNs. The main proposal of this paper is to reconstruct images based on the gradients of the neural network with high quality. Successfully doing that means the privacy is not guaranteed even if just the parameters, not the data is shared with the server.

The paper proved that the input to a fully connected layer could be reconstructed independently of the network architecture. Even if the gradients are averaged through a number of iterations, this doe not help to protect the user’s privacy.

The paper proves that it is possible to recover much of the information available in the original data. The key findings from this paper are summarized in the following points:

The next figure, taken from the paper shows, an image, and its reconstruction. The original image is reconstructed with high quality (with little degradation) based on the shared gradients to the server.

This article discussed some of the privacy and security issues in federated learning by summarizing 3 papers. It’s clear that it’s immensely challenging to preserve a user’s privacy, even if only sharing gradients returned by training the global model (e.g. neural network). Even though the data used for training local network updates isn’t shared, it is possible to reconstruct that data.