8 Women in AI Who Are Striving to Humanize the World

Some exceptional female researchers and engineers are working on projects to make the world a better place with the help of AI, data science, and machine learning.

By Liudmyla Taranenko, Data Scientist at MobiDev on March 8, 2022 in Artificial Intelligence

Editor's note: This article was originally published on March 8, 2021.

Can AI Positively Change the World?

Wired reports a gender bias exists in AI and, in 2018, found that only 12% of AI researchers are women. When I started my career as a Data Analyst, a Data Science engineer position was not widely available in Ukraine. And mostly, it wasn’t available for female Maths graduates without special skills and experience. Self-education and getting acquainted with ML algorithms took me some time and a lot of effort. Nowadays, I work as an AI engineer at MobiDev, and the more experience I get, the more willing I am to share my experiences with people in my articles and webinars.

Today, I want to talk about some exceptional women working in AI who inspire me in my everyday work.

Two of them, Joy Buolamwini and Fei-Fei Li, along with others, were honored for International Women’s Day in 2019 by KDnuggets.

Algorithmic Justice League’s mission is to raise public awareness about AI and its impact on the reduction of AI-bias and harm. Her pioneering research, published in 2018/2019, showed how facial recognition software used by Amazon, Microsoft, IBM, and other companies was not “machine neutral.” It had a distinctly-lower performance when trying to recognize darker female faces as accurately as those of white men. Fast Company reported that the software was taken off the market for re-configuration based on Buolamwini’s research.

Fei-Fei Li is a Stanford professor and the founder of Stanford’s Human-Centered AI Institute. She developed ImageNet, first published in 2009, as a training tool to teach AI how to identify objects. ImageNet was considered the birth of AI-dataset training, with the first tests achieving 71.8% accuracy. Since then, the annual ImageNet challenge is a contest to see which algorithm identifies objects with the lowest error rate. The last competition was held in 2017 when the winning algorithm hit 97.3% accuracy, which is better than human abilities.

But here are eight other women, not yet honored by KDnuggets, who use AI in positive ways and whose contributions to make a better world are significant. The list is in alphabetical order by last name. 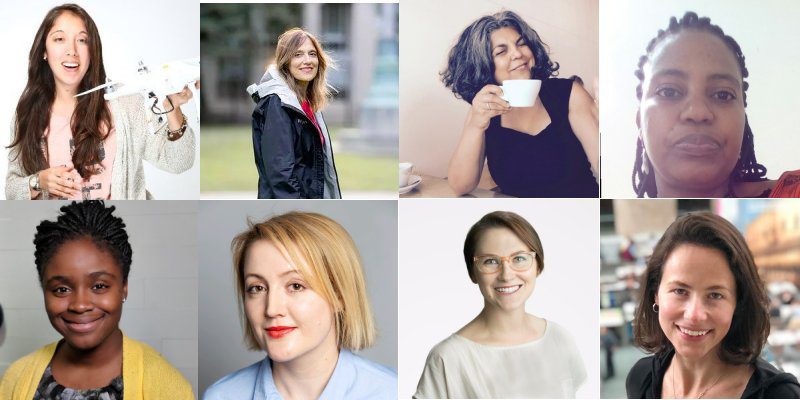 Government officials use this information to protect the public from the dangers of air-borne contaminants in an emergency, such as an industrial gas leak, natural disaster, or chemical spill. Another use for these AI-driven systems is to improve overall air quality by effectively monitoring targeted areas subject to air-pollution abatement initiatives.

Working as the faculty lead and a professor at MIT, Regina Barzilay has long been a thought leader in this AI space. She was the first person to receive the $1 million prize for the AAAI Squirrel AI Award for Artificial Intelligence for the Benefit of Humanity.

Professor Barzilay is a strong advocate for having standards that ensure equity and fairness in applying AI technology, especially in medicine. As an example, she points to the Tyrer-Cuzick model used to determine a patient’s risk of getting breast cancer by analyzing imaging data. This system has a modest accuracy with white women but fails miserably with women of African or Asian descent.

This failure happens because the software has not been adequately machine-trained on enough sets of images from racially-diverse groups. This problem is due to undesirable researcher-bias. It is readily proven and unconscionable. Professor Barzilay insists that software developers eliminate bias by validating AI software on different groups of people or by allowing it to be open source to compare system accuracy using diverse models.

As the Director of Data Science at Fitbit R&D, Dr. Emir-Farinas works with AI applications using machine learning combined with behavioral science and healthcare. She is working to answer questions that include:

Answering such questions necessitates a multi-disciplinary approach involving behavioral economics, behavior science, health science, and machine learning to deliver the appropriate interventions, and encouragement, and to make the solution “smart” with more personalization.

At the Nelson Mandela African Institution of Science and Technology, Dina Machuve is a lecturer and researcher. She focuses on creating data-driven solutions to improve agriculture. One application is a diagnostics system that helps identify diseases in poultry using bioinformatics and computer vision technology.

There are over 380 million household farms that create food for 70% of the people living in developing countries. Manchuve’s solution, now deployed in Tanzania, uses systematic data collection and analysis in small to medium sized farms. The project demonstrates the value of using AI methods of deep learning for disease diagnostics to improve livestock health. It works by collecting data for analysis in low-resourced settings from the 3.7 million households that raise chickens.

Deborah Raji was given the 2020 Barlow award at the Electronic Frontier Foundation Pioneer Award Ceremony for her work on racial-bias in AI. Her concentration is the negative impact AI has on minorities when dealing with the American justice system. She advocates eradicating and replacing the seriously-flawed facial recognition and surveillance systems used by law enforcement in many American cities.

As a Senior Machine Learning Engineer at Microsoft, Tempest van Schaik is on the Commercial Software Engineering team in the Data Science division for Microsoft’s Azure cloud-based services. This team is responsible for coding high-level AI projects for the cloud.

One exciting project is Fizzyo, a device that improves physiotherapy for patients with Cystic Fibrosis. It turns breathing exercises into controls for video games. This device makes the experience more fun for children undergoing therapy and provides data collection of every breath while the child plays, which leads to better treatment outcomes.

At Google, Lucy Vasserman works as a staff software engineer on innovative AI projects. Google partnered with conservation groups to use AI to study wildlife. Since the 1990s, the groups have collected 4.5 million photos of animals using camera traps. That database of images formed the initial image library for Wildlife Insights. Others can add camera trap images to help map wildlife globally and to build the growing image database. Anyone can access the database online to explore the photo and the location maps of the camera traps.

Vasserman worked on the program to train it to identify around 100 species. It can process and categorize 3,600 photos per hour. The machine learning software analyses the images to discover trends such as the population size of individual species, predator/prey interactions, and how wild animals respond to human hunting and encroachment on their habitat.

At Google, Fernanda Viégas works as a data visualization expert. Examples of the visualization systems created by her with other Big Picture team members, can be experienced at fernandaviegas.com. She is the co-leader of Google’s PAIR (People + AI Research).

Some of her projects show wind currents, collaboration patterns of Wikipedia editorial activities, and dynamic maps of world-news events. Dr. Viégas produces highly-visual, data-driven artwork that is part of a permanent collection at the Museum of Modern Art in New York.

As a Latina who came from a non-technical background, she obtained her doctorate at the MIT Media Lab. She makes an effort to increase diversity initiatives in technological fields to reduce the underrepresentation of women and minorities in data science.

Women are encouraged to get involved in AI due to its world-changing qualities and to reduce the gender-bias that exists. Take inspiration from the late Justice Ruth Bader Ginsburg of the U.S. Supreme Court. When asked, “How many justices would she like to be women on the Supreme Court?” She said, “All of them.”

Liudmyla Taranenko is a Data Scientist at MobiDev.