The Lost Art of Decile Analysis

The goal of classification is a primary and widely-used application of machine learning algorithms. However, if careful consideration through additional analysis is not taken into the subtlety in the results of an even an apparently straightforward binary classifier, then the deeper meaning of your prediction may be obscured. 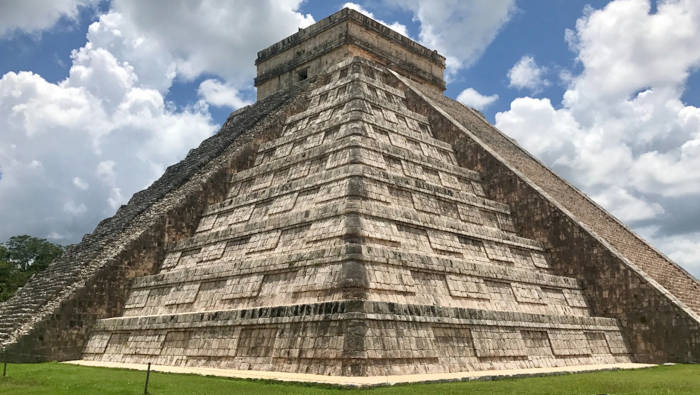 Binary Logistic Regression is used as a Classification algorithm when we want the response variable to be dichotomous (Churn/Not Churned, Pass/Fail, Spam/No spam etc.)

Usually, we make Logistic Regression into a classification algorithm by setting an appropriate probability cut-off or threshold (0.4, 0.5, 0.6 etc.).

The problem of classifying using a threshold value

Fixing the probability threshold is purely a business call and not a statistical one.

Frank Harrell, in his blog1 aptly, makes the point “classification is a forced choice”.

The other problem with thresholds is that when we use an improper scoring rule like classification accuracy, it can be easily gamed. For example, if out of 100 people, 95 of them default on a loan, and 5 don’t. If the classifier classifies everyone to default on the loan, then it would have an accuracy of 95%!

So, is there a better way to use Logistic Regression?

Industries such as Finance and Marketing use Logistic Regression in a more appropriate way for Credit risk modelling and marketing campaign targeting, respectively.

A real use case

Let us say you are a CMO in charge of sales and marketing of a product in your organization. You plan to launch a marketing campaign to increase sales of that product. You have been given a fixed budget for this. Now you would like to get the best ROI possible, i.e., spend the exact fixed budget or even lesser and get the maximum sales possible. Here is what you have.

You have the data for 10,000 customers who had either purchased or not purchased a similar product in the past.

You would like to understand which customers should be targeted to increase the likelihood of purchase this time.

You would obviously like to target those people who are more likely to buy the product since you have a fixed budget for the campaign. How to go about it?

The answer is Decile Analysis.

So, What is a Decile Analysis?

Decile analysis was once a popularly used technique. However, the convention of teaching and bucketing machine learning problems into either ‘classification’ or ‘Regression’ types led people to forget the Decile analysis type analyses.

Many seasoned data scientists would recollect it by the name ‘Gains Chart.’ Decile Analysis is used to categorize a dataset from highest to lowest values or vice versa (based on predicted probabilities).

As evident from the name, the analysis involves dividing the dataset into ten equal groups. Each group should have the same no. of observations/customers.

Here are the steps:

Step 3: Divide the whole dataset into 10 groups. Each group should contain an equal number of observations. So, if there are 10,000 records, each group would have 1,000 records/customers.

Step 4: Compute the percent of responders for each decile.

Step 5: Compute the response rate for each decile.

Step 6: Compute the lift for each decile.

The below table depicts a typical decile analysis output.

As stated earlier, each decile has an equal number of customers (1000 in each decile).

From Table 1, Decile 1 contains the top 10% of the customers who are most likely to buy. Decile 1 has the highest number of responders (224 responders).

The Gain Chart below explains this better. 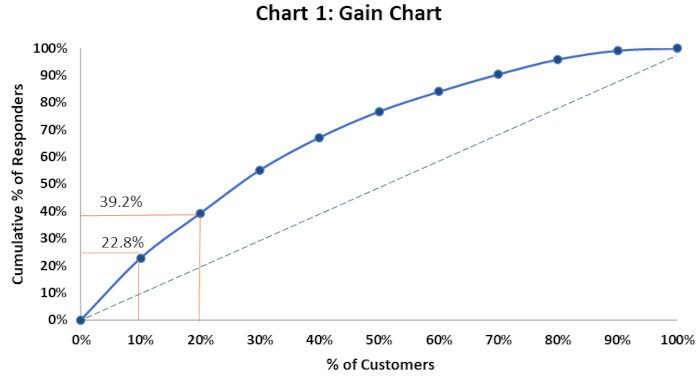 A Gain Chart can be used to assess what % of customers respond in each decile. So, rather than targeting customers from lower deciles, customers can be picked up from the top deciles only.

The baseline tells how much % of customers would respond if we target customers randomly without a model.

The Response Rate tells what the percentage of customers who responded in each decile is. The response % is highest in Decile 1, followed by Decile 2, and so on. 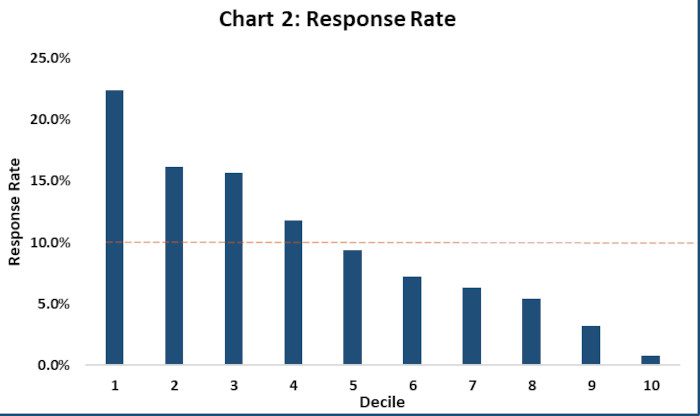 Lift = cumulative % of responders / customers % at each decile

How to interpret: If we target the top two deciles, then we would target 20% of the customers. In the same deciles, the cumulative % of responders is 39.2%. Hence, there is a lift of 1.96.

A lift of 1 means there is no gain compared with the no. of customers targeted at random. Lift greater than 1 means the model approach is better than selecting the customers at random.

The takeaway from Lift Chart: This can be used to identify the deciles which have a higher Lift.

How to use Decile Analysis in business decision making

Now that we have done building Decile Analysis, the next pertinent question is how we use it to make effective business decisions:

Going by the above results, we make a decision that we will target customers in the Top 4 deciles as they have a higher probability of buying the product. 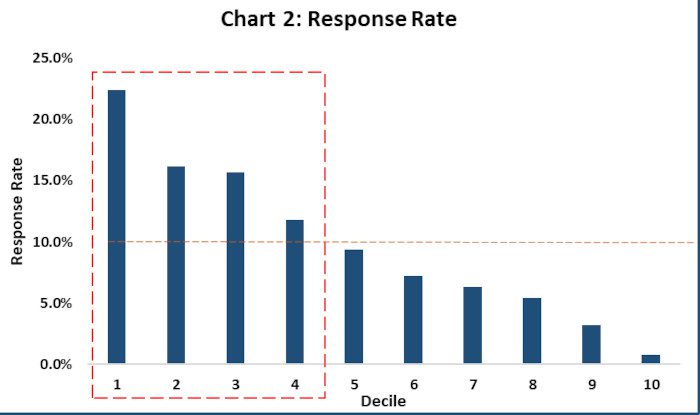 From the business point of view, the ROI of targeting the Top 4 deciles is more. As we move down the decile, the ROI rapidly decreases and is not worthwhile pursuing these customers.

Important note: In this blog, we focus on decile analysis, but decile analysis can be further generalized by considering intervals smaller than 10%, for example, 5% or 1%. For simplicity of explanation, we limit ourselves to 10% steps (decile analysis), but generalization to smaller steps can be easily made.

So, that wraps up our decile analysis article. Your comments are welcome.

This article was co-authored by Ridhima Kumar and Venkat Raman, co-founders Aryma Labs.