An Introduction to Reinforcement Learning with OpenAI Gym, RLlib, and Google Colab

Get an Introduction to Reinforcement Learning by attempting to balance a virtual CartPole with OpenAI Gym, RLlib, and Google Colab.

This tutorial will use reinforcement learning (RL) to help balance a virtual CartPole. The video above from PilcoLearner shows the results of using RL in a real-life CartPole environment.

In particular, this tutorial explores:

What is Reinforcement Learning

As a previous post noted, machine learning (ML), a sub-field of AI, uses neural networks or other types of mathematical models to learn how to interpret complex patterns. Two areas of ML that have recently become very popular due to their high level of maturity are supervised learning (SL), in which neural networks learn to make predictions based on large amounts of data, and reinforcement learning (RL), where the networks learn to make good action decisions in a trial-and-error fashion, using a simulator. 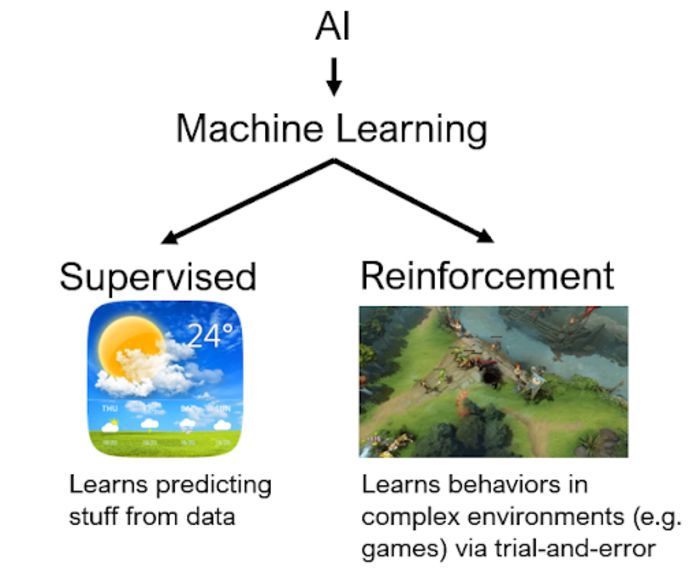 RL is the tech behind mind-boggling successes such as DeepMind’s AlphaGo Zero and the StarCraft II AI (AlphaStar) or OpenAI’s DOTA 2 AI (“OpenAI Five”). Note that there are many impressive uses of reinforcement learning and the reason why it is so powerful and promising for real-life decision making problems is because RL is capable of learning continuously — sometimes even in ever changing environments — starting with no knowledge of which decisions to make whatsoever (random behavior). 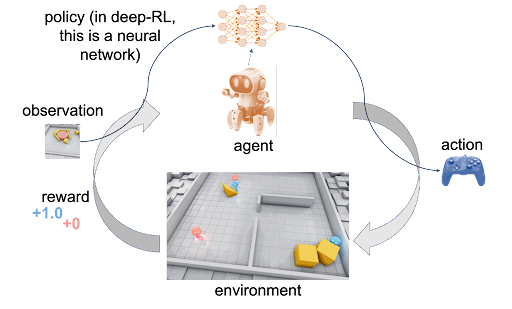 The diagram above shows the interactions and communications between an agent and an environment. In reinforcement learning, one or more agents interact within an environment which may be either a simulation like CartPole in this tutorial or a connection to real-world sensors and actuators. At each step, the agent receives an observation (i.e., the state of the environment), takes an action, and usually receives a reward (the frequency at which an agent receives a reward depends on a given task or problem). Agents learn from repeated trials, and a sequence of those is called an episode — the sequence of actions from an initial observation up to either a “success” or “failure” causing the environment to reach its “done” state. The learning portion of an RL framework trains a policy about which actions (i.e., sequential decisions) cause agents to maximize their long-term, cumulative rewards. 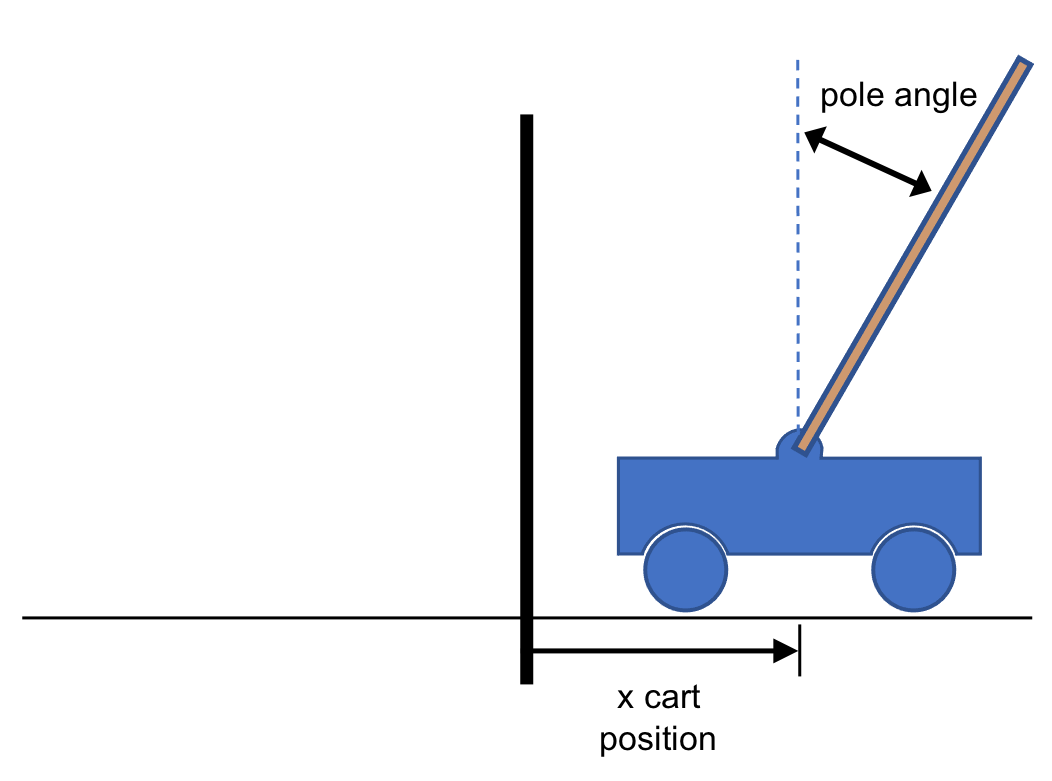 The problem we are trying to solve is trying to keep a pole upright. Specifically, the pole is attached by an un-actuated joint to a cart, which moves along a frictionless track. The pendulum starts upright, and the goal is to prevent it from falling over by increasing and reducing the cart's velocity. 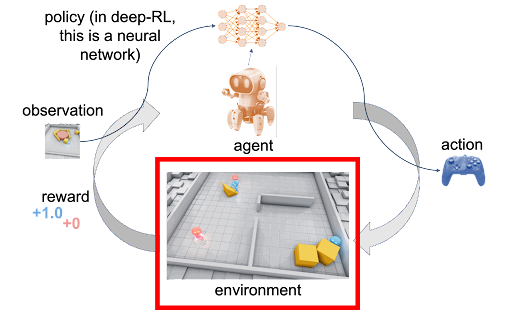 Rather than code this environment from scratch, this tutorial will use OpenAI Gym which is a toolkit that provides a wide variety of simulated environments (Atari games, board games, 2D and 3D physical simulations, and so on). Gym makes no assumptions about the structure of your agent (what pushes the cart left or right in this cartpole example), and is compatible with any numerical computation library, such as numpy.

The code below loads the cartpole environment.

Let's now start to understand this environment by looking at the action space.

The output Discrete(2) means that there are two actions. In cartpole, 0 corresponds to "push cart to the left" and 1 corresponds to "push cart to the right". Note that in this particular example, standing still is not an option. In reinforcement learning, the agent produces an action output and this action is sent to an environment which then reacts. The environment produces an observation (along with a reward signal, not shown here) which we can see below:

The observation is a vector of dim=4, containing the cart's x position, cart x velocity, the pole angle in radians (1 radian = 57.295 degrees), and the angular velocity of the pole. The numbers shown above are the initial observation after starting a new episode (`env.reset()`). With each timestep (and action), the observation values will change, depending on the state of the cart and pole.

In reinforcement learning, the goal of the agent is to produce smarter and smarter actions over time. It does so with a policy. In deep reinforcement learning, this policy is represented with a neural network. Let's first interact with the gym environment without a neural network or machine learning algorithm of any kind. Instead we'll start with random movement (left or right). This is just to understand the mechanisms. 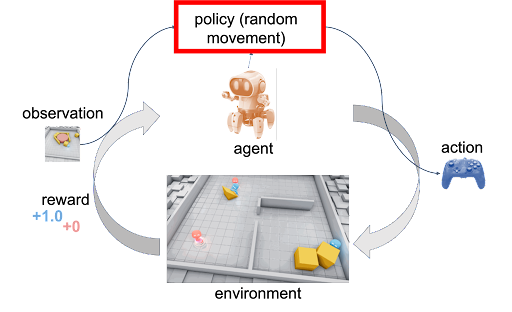 The code below resets the environment and takes 20 steps (20 cycles), always taking a random action and printing the results. 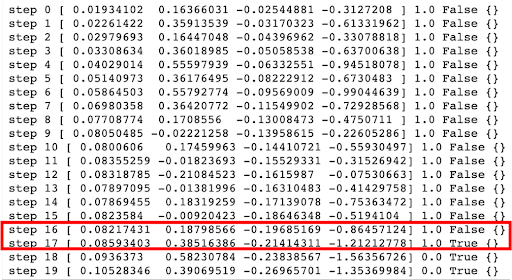 Sample output. There are multiple conditions for episode termination in cartpole. In the image, the episode is terminated because it is over 12 degrees (0.20944 rad). Other conditions for episode termination are cart position is more than 2.4 (center of the cart reaches the edge of the display), episode length is greater than 200, or the solved requirement which is when the average return is greater than or equal to 195.0 over 100 consecutive trials.

The printed output above shows the following things:

While these numbers are useful outputs, a video might be clearer. If you are running this code in Google Colab,  it is important to note that there is no display driver available for generating videos. However, it is possible to install a virtual display driver to get it to work.

The next step is to start an instance of the virtual display.

OpenAI gym has a VideoRecorder wrapper that can record a video of the running environment in MP4 format. The code below is the same as before except that it is for 200 steps and is recording.

Usually you end the simulation when done is 1 (True). The code above let the environment keep on going after a termination condition was reached. For example, in CartPole, this could be when the pole tips over, pole goes off-screen, or reaches other termination conditions.

The code above saved the video file into the Colab disk. In order to display it in the notebook, you need a helper function.

The code below renders the results. You should get a video similar to the one below.

Playing the video demonstrates that randomly choosing an action is not a good policy for keeping the CartPole upright.

How to Train an Agent using Ray's RLlib

The previous section of the tutorial had our agent make random actions disregarding the observations and rewards from the environment. The goal of having an agent is to produce smarter and smarter actions over time and random actions don't accomplish that. To make an agent make smarter actions over time, itl needs a better policy. In deep reinforcement learning, the policy is represented with a neural network. 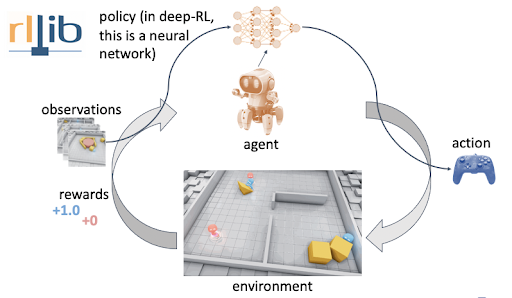 This tutorial will use the RLlib library to train a smarter agent. RLlib has many advantages like:

While some of these features won't be fully utilized in this post, they are highly useful for when you want to do something more complicated and solve real world problems. You can learn about some impressive use-cases of RLlib here.

To get started with RLlib, you need to first install it.

Now you can train a PyTorch model using the Proximal Policy Optimization (PPO) algorithm. It is a very well rounded, one size fits all type of algorithm which you can learn more about here. The code below uses a neural network consisting of a single hidden layer of 32 neurons and linear activation functions.

This code should produce quite a bit of output. The final entry should look something like this:

The entry shows it took 35 iterations, running over 258 seconds, to solve the environment. This will be different each time, but will probably be about 7 seconds per iteration (258 / 35 = 7.3). Note that if you like to learn the Ray API and see what commands like ray.shutdown and ray.init do, you can check out this tutorial.

How to use a GPU to Speed Up Training

While the rest of the tutorial utilizes CPUs, it is important to note that you can speed up model training by using a GPU in Google Colab. This can be done by selecting Runtime > Change runtime type and set hardware accelerator to GPU. Then select Runtime > Restart and run all.

Notice that, although the number of training iterations might be about the same, the time per iteration has come down significantly (from 7 seconds to 5.5 seconds).

Creating a Video of the Trained Model in Action

RLlib provides a Trainer class which holds a policy for environment interaction. Through the trainer interface, a policy can be trained, action computed, and checkpointed. While the analysis object returned from ray.tune.run earlier did not contain any trainer instances, it has all the information needed to reconstruct one from a saved checkpoint because  checkpoint_at_end=True was passed as a parameter. The code below shows this.

Let’s now create another video, but this time choose the action recommended by the trained model instead of acting randomly.

This time, the pole balances nicely which means the agent has solved the cartpole environment! 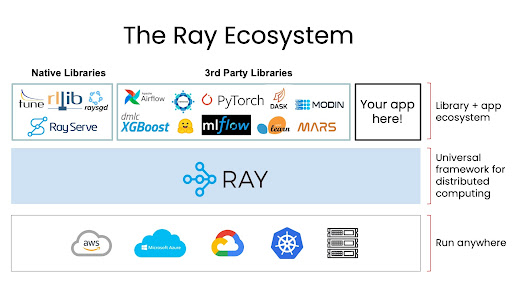 RLlib is a reinforcement learning library that is part of the Ray Ecosystem. Ray is a highly scalable universal framework for parallel and distributed python. It is very general and that generality is important for supporting its library ecosystem. The ecosystem covers everything from training, to production serving, to data processing and more. You can use multiple libraries together and build applications that do all of these things.

This part of the tutorial utilizes Ray Tune which is another library in the Ray Ecosystem. It is a library for experiment execution and hyperparameter tuning at any scale. While this tutorial will only use grid search, note that Ray Tune also gives you access to more efficient hyperparameter tuning algorithms like population based training, BayesOptSearch, and HyperBand/ASHA.

Let’s now try to find hyperparameters that can solve the CartPole environment in the fewest timesteps.

Enter the following code, and be prepared for it to take a while to run:

By asking for 12 CPU cores by passing in num_cpus=12 to ray.init, four trials get run in parallel across three cpus each. If this doesn’t work, perhaps Google has changed the VMs available on Colab. Any value of three or more should work. If Colab errors by running out of RAM, you might need to do Runtime > Factory reset runtime, followed by Runtime > Run all. Note that there is an area in the top right of the Colab notebook showing the RAM and disk use.

Specifying num_samples=5 means that you will get five random samples for the learning rate. For each of those, there are two values for the size of the hidden layer, and two values for the activation function. So, there will be 5 * 2 * 2 = 20 trials, shown with their statuses in the output of the cell as the calculation runs.

Note that Ray prints the current best configuration as it goes. This includes all the default values that have been set, which is a good place to find other parameters that could be tweaked.

After running this, the final output might be similar to the following output:

So, of the twenty sets of hyperparameters, the one with 64 neurons, the ReLU activation function, and a learning rate around 6.7e-3 performed best. 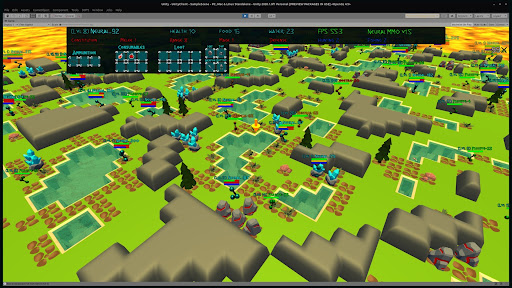 Neural MMO is an environment modeled from Massively Multiplayer Online games — a genre supporting hundreds to thousands of concurrent players. You can learn how Ray and RLlib help enable some key features of this and other projects here.