Essential Math for Data Science: Eigenvectors and Application to PCA

In this article, you’ll learn about the eigendecomposition of a matrix.

Matrix decomposition, also called matrix factorization is the process of splitting a matrix into multiple pieces. In the context of data science, you can for instance use it to select parts of the data, aimed at reducing dimensionality without losing much information (as for instance in Principal Component Analysis, as you’ll later in this post). Some operations are also more easily computed on the matrices resulting from the decomposition.

In this article, you’ll learn about the eigendecomposition of a matrix. One way to understand it is to consider it as a special change of basis (more details about change of basis in my last post). You’ll first learn about eigenvectors and eigenvalues and then you’ll see how it can be applied to Principal Component Analysis (PCA). The main idea is to consider the eigendecomposition of a matrix

as a change of basis where the new basis vectors are the eigenvectors.

As you can see in Chapter 7 of Essential Math for Data Science you can consider matrices as linear transformations. This means that if you take any vector

and apply the matrix

to it, you obtain a transformed vector

Take the example of:

(with the matrix-vector product), you get a new vector: 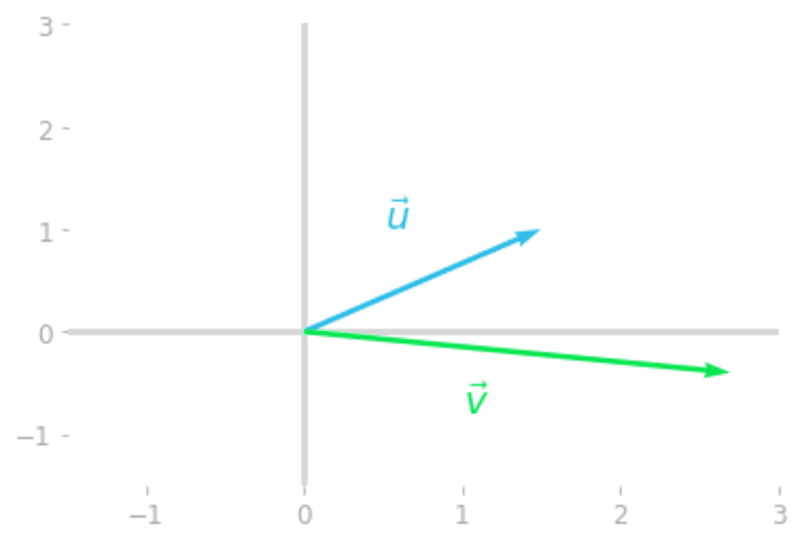 Figure 1: Transformation of the vector

Note that, as you can expect, the transformed vector

doesn’t run in the same direction as the initial vector

. This change of direction characterizes most of the vectors you can transform by

However, take the following vector:

to obtain a vector 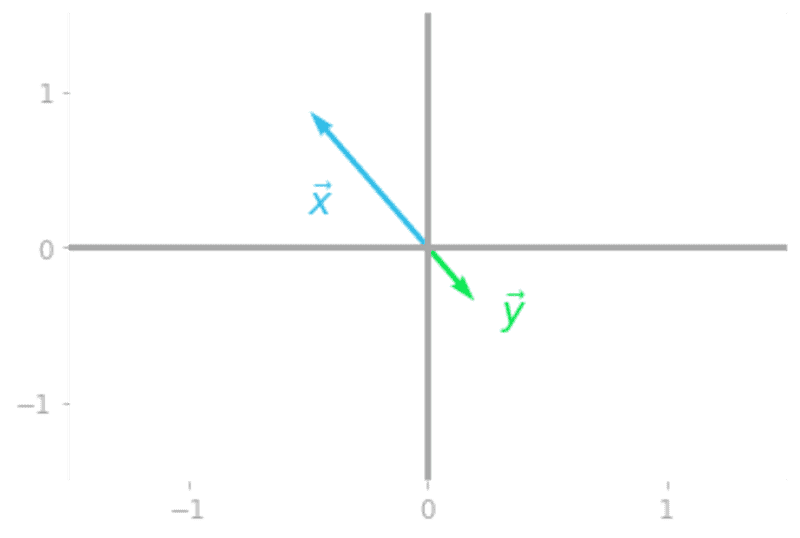 Figure 2: Transformation of the special vector

You can see in Figure 2 that the vector

has a special relationship with the matrix

: it is rescaled (with a negative value), but both the initial vector

and the transformed vector

are on the same line.

is an eigenvector of

. It is only scaled by a value, which is called an eigenvalue of the matrix

. An eigenvector of the matrix

is an eigenvector of

(pronounced “lambda”) being the eigenvalue corresponding to the eigenvector

Eigenvectors of a matrix are nonzero vectors that are only rescaled when the matrix is applied to them. If the scaling factor is positive, the directions of the initial and the transformed vectors are the same, if it is negative, their directions are reversed.

matrix has, at most,

linearly independent eigenvectors. However, each eigenvector multiplied by a nonzero scalar is also an eigenvector. If you have:

This excludes the zero vector as eigenvector, since you would have

In this case, every scalar would be an eigenvalue and thus would be undefined.

Principal Component Analysis, or PCA, is an algorithm that you can use to reduce the dimensionality of a dataset. It is useful, for instance, to reduce computation time, compress data, or avoid what is called the curse of dimensionality. It is also useful for visualization purposes: high dimensional data is hard to visualize and it can be useful to decrease the number of dimensions to plot your data.

In this hands-on project, you’ll use various concepts that you can learn in the book Essential Math for Data Science, as change of basis (Sections 7.5 and 9.2, some samples here), eigendecomposition (Chapter 9) or covariance matrices (Section 2.1.3) to understand how PCA is working.

In the first part, you’ll learn about the relationship between projections, explained variance and error minimization, first with a bit of theory, and then by coding a PCA on the beer dataset (consumption of beer as a function of temperature). Note that you’ll also find another example in Essential Math for Data Science where you’ll use Sklearn to use PCA on audio data to visualize audio samples according to their category, and then to compress these audio samples.

The goal of PCA is to project data onto a lower dimensional space while keeping as much of the information contained in the data as possible. The problem can be seen as a perpendicular least squares problem also called orthogonal regression.

You’ll see here that the error of the orthogonal projections is minimized when the projection line corresponds to the direction where the variance of the data is maximal.

It is first important to understand that, when the features of your dataset are not completely uncorrelated, some directions are associated with a larger variance than others. 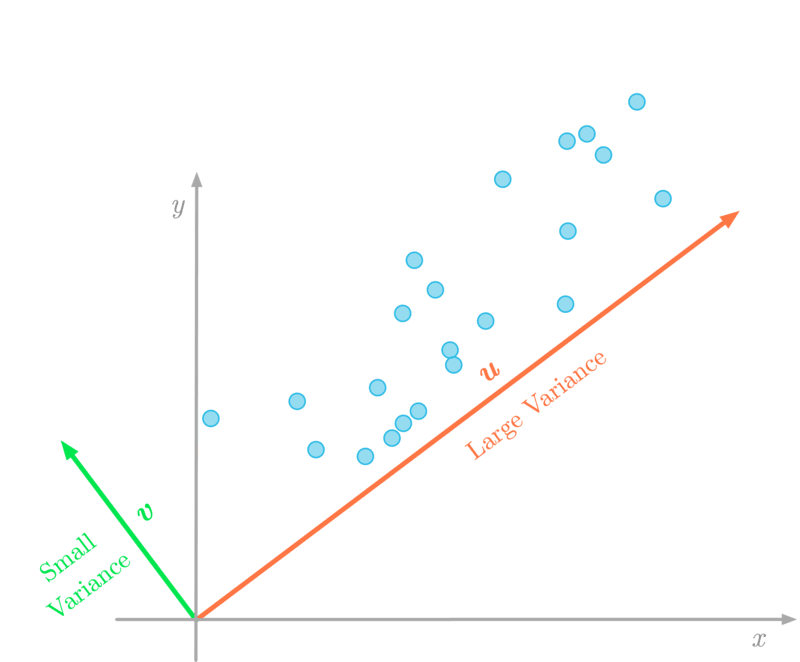 >
Figure 3: The variance of the data in the direction of the vector

(red) is larger than in the direction of the vector

For this reason, the goal of the PCA is to change the basis of the data matrix such that the direction with the maximum variance (

in Figure 3) becomes the first principal component. The second component is the direction with the maximum variance which is orthogonal to the first one, and so on.

Figure 4: Change of basis such that the maximum variance is in the

As an illustration, Figure 4 shows the data after a change of basis: the maximum variance is now associated with the

-axis. You can for instance keep only this first dimension.

In other words, expressing the PCA in terms of change of basis, its goal is to find a new basis (which is a linear combination of the initial basis) in which the variance of the data is maximized along the first dimensions.

Finding the directions that maximize the variance is similar as minimizing the error between the data and its projection.

Figure 5: The direction that maximizes the variance is also the one associated with the smallest error (represented in gray).

You can see in Figure 5 that lower errors are shown in the left figure. Since projections are orthogonal, the variance associated to the direction of the line on which you project doesn’t impact the error.

After changing the basis of the dataset, you should have a covariance between features close to zero (as for instance in Figure 4). In other terms, you want that the transformed dataset has a diagonal covariance matrix: the covariance between each pair of principal components is equal to zero.

You can see in Chapter 9 of Essential Math for Data Science, that you can use eigendecomposition to diagonalize a matrix (make the matrix diagonal). Thus, you can calculate the eigenvectors of the covariance matrix of the dataset. They will give you the directions of the new basis in which the covariance matrix is diagonal.

Let’s illustrate how PCA is working with the beer dataset showing the beer consumption and the temperature in São Paulo, Brazil for the year 2015.

Let’s load the data and plot the consumption as a function of the temperature: 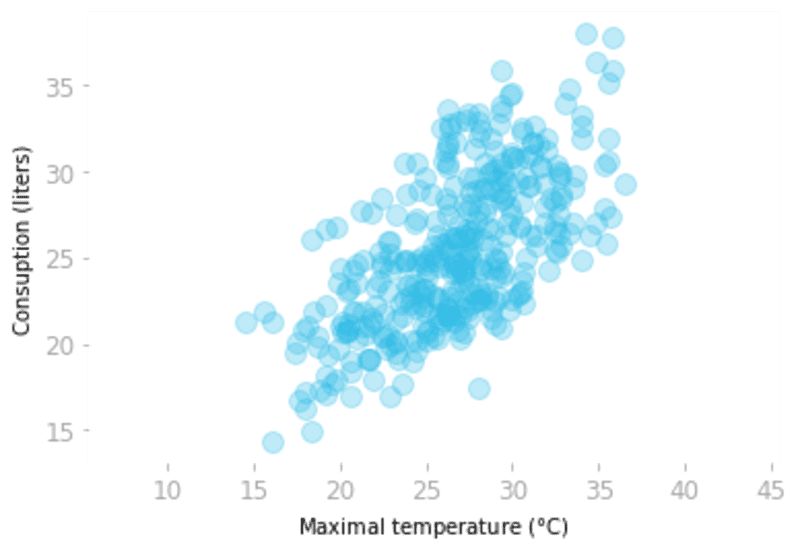 Figure 6: Consumption of beer as a function of temperature.

with the two variables: temperatures and consumption.

has 365 rows and two columns (the two variables).

Eigendecomposition of the Covariance Matrix

As you saw, the first step is to compute the covariance matrix of the dataset:

Remember that you can read it as follows: the diagonal values are respectively the variances of the first and the second variable. The covariance between the two variables is around 12.2.

Now, you will calculate the eigenvectors and eigenvalues of this covariance matrix:

You can store the eigenvectors as two vectors

Let’s plot the eigenvectors with the data (note that you should use centered data because it is the data used to calculate the covariance matrix). 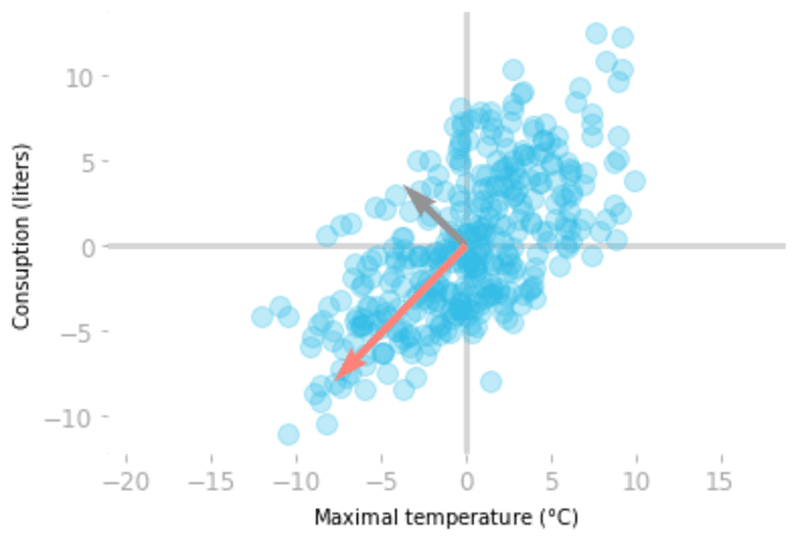 (in red) scaled according to the explained variance.

You can see in Figure 7 that the eigenvectors of the covariance matrix give you the important directions of the data. The vector

in gray is orthogonal to

and is the second principal component.

Now that your eigenvectors are sorted, let’s change the basis of the data:

You can plot the transformed data to check that the principal components are now uncorrelated: 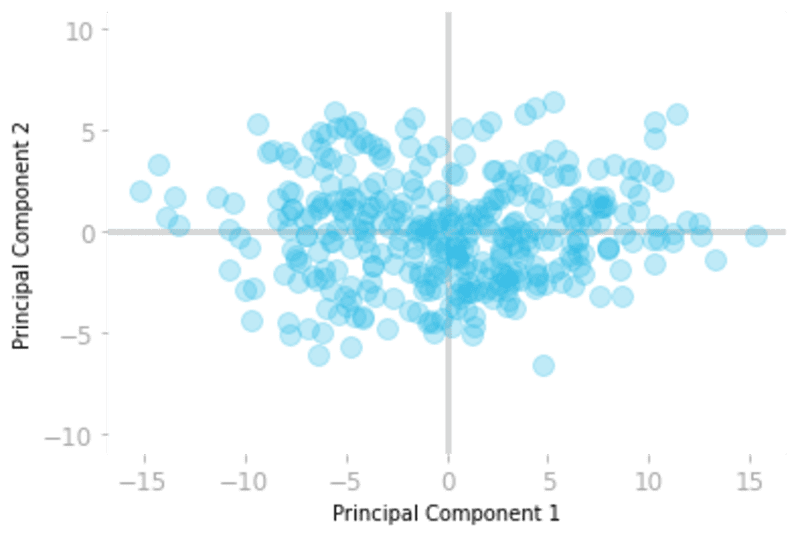 Figure 8: The dataset in the new basis.

Figure 8 shows the data samples in the new basis. You can see that the first dimension (the

-axis) corresponds to the direction with the largest variance.

You can keep only the first component of the data in this new basis without losing too much information.

One caveat of using the covariance matrix to calculate the PCA is that it can be hard to compute when there are many features (as with audio data, like in the second part of this hands-on). For this reason, it is usually preferred to use the Singular Value Decomposition (SVD) to calculate the PCA.

Hadrien Jean is a machine learning scientist. He owns a Ph.D in cognitive science from the Ecole Normale Superieure, Paris, where he did research on auditory perception using behavioral and electrophysiological data. He previously worked in industry where he built deep learning pipelines for speech processing. At the corner of data science and environment, he works on projects about biodiversity assessement using deep learning applied to audio recordings. He also periodically creates content and teaches at Le Wagon (data science Bootcamp), and writes articles in his blog (hadrienj.github.io).