This short overview of Social Network Analysis for Fraud Detection is presented by Veronique Van Vlasselaer, a student at KU Leuven, Belgium, working in the DataMiningApps group led by Prof. dr. Bart Baesens. 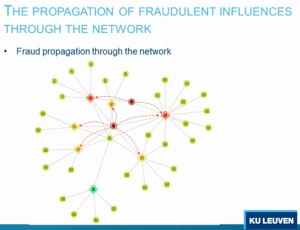 Data mining algorithms are focused on finding frequently occurring patterns in historical data. These techniques are useful in many domains, but for fraud detection it is exactly the opposite. Rather than being a pattern repeatedly popping up in a data set, fraud is an uncommon, well-considered, imperceptibly concealed, time-evolving and often carefully organized crime which appears in many types and forms. As traditional techniques often fail to identify fraudulent behavior, social network analytics offers new insights in the propagation of fraud through a network. Indeed, fraud is usually not something an individual would commit by himself, but is often organized by groups of people loosely connected to each other.

The use of networked data in fraud detection becomes increasingly important to uncover fraudulent patterns and to detect in real-time when certain processes show some characteristics of irregular activities. Although many analyses typically focus in the first place on fraud detection, the emphasis should shift towards fraud prevention, i.e. detecting fraud before it is even committed. As fraud is a time-evolving phenomenon, social network algorithms succeed to keep ahead of new types of fraud and to adapt to changing environments and surrounding effects.