Yang-Mills: A million dollar connection between Twitter and quantum physics?

Is there a link between Social network connections, as revealed on Twitter, and Quantum Physics, specifically Quantum Yang-Mills theory, one of Millenium $1 Million math problems?

With the Internet's promise of instant and absolute connectedness, two things appear to be curiously underrepresented: both temporal and lateral perspective of our data-trails. Yet, the amount of data we are constantly producing provides a whole world of contexts, many of which can reveal astonishing relationships if only looked at through time.

This experiment explores these possibilities by starting with messages on the microblogging-platform Twitter. One can search for usernames or topics, which are tracked through time and visualized much like the way a particle collider draws pictures of subatomic matter. Posts that didn't resonate with anyone just connect to the next item in the stream. The ones that did, however, spin off and horizontally link to users or topics who relate to them, either directly or in terms of their content. 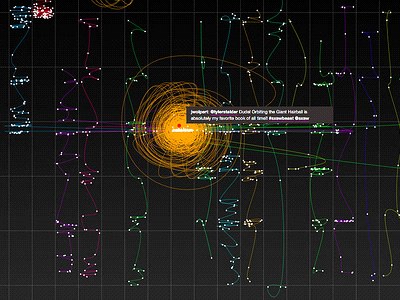 This pattern is suprisingly similar to Yang Mills problem which is one of seven prestigious $1 Million Millenium problems selected by Clay Mathematics Institute. 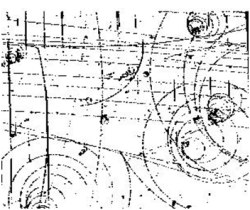 The successful use of Yang-Mills theory to describe the strong interactions of elementary particles depends on a subtle quantum mechanical property called the "mass gap:" the quantum particles have positive masses, even though the classical waves travel at the speed of light. This property has been discovered by physicists from experiment and confirmed by computer simulations, but it still has not been understood from a theoretical point of view. Progress in establishing the existence of the Yang-Mills theory and a mass gap and will require the introduction of fundamental new ideas both in physics and in mathematics.

Prasad Kothari is experienced analytics professional, who worked extensively with clients such as Merck, Sanofi Aventis, Freddie Mac, Fractal Analytics, US Government and National Institute of Health on various social media and analytics projects. His research has been previously published in American journal of psychology and Drug Abuse. He has also written books on social media analytics.