Geoffrey Hinton talks about Deep Learning, Google and Everything

A review of Dr. Geoffrey Hinton’s Ask Me Anything on Reddit. He talked about his current research and his thought on some deep learning issues. 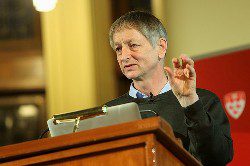 There is no doubt that Geoffrey Hinton is one of the top thought leaders in artificial intelligence. He is a professor at University of Toronto, and recently joined Google as a part-time researcher.

When it comes to deep learning, we can see his name almost everywhere, such as in Back-propagation, Boltzmann machines, distributed representations, time-delay neural nets, dropout, deep belief nets, etc.

My aim is to discover a learning procedure that is efficient at finding complex structure in large, high-dimensional datasets and to show that this is how the brain learns to see — Geoff Hinton.

Since Geoffrey Hinton became a researcher in Google, we did not hear much from him. His AMA (Ask Me Anything) on Reddit provided an excellent opportunity to his ‘fans’. Here are some hot topics discussed on his AMA.

The main thing I have been working on is my capsules theory.

Currently we use an unstructured “layer” of artificial neurons to model a cortical area. We tried it because it is easy to program and it turned out to work very well. But Dr. Hinton wants to replace unstructured layers with groups of neurons called “capsules” that are a lot more like cortical columns.

Hinton also commented on Szegedy et al.’s paper where the continuity and stability of deep neural networks were questioned  (See my post “Does Deep Learning Have Deep Flaws?“). However, Hinton said his capsule theory may not be fooled as easily.

Dr. Hinton joined Google last year after Google acquired his startup DNNresearch Inc.
When asked about his most successful things so far at Google, he said that

One big success was sending my student, Navdeep Jaitly, to be an intern at Google. He took a deep net for acoustic modeling developed by two students in Toronto (George Dahl and Abdel-Rahman Mohamed) and ported it to Google’s system.

Deep learning and How Our Brains Work

Geoff Hinton discovered how the brain really works. Once each year for the last 25 years.

This is a popular joke about Dr. Hinton and his theories (watch the video). Dr. Hinton made a couple of points about Deep Learning and how our brain works on his AMA.

Dr. Hinton shared his life stories which have the greatest influences on his thinking.

From a very young age I was convinced that many of the things that the teachers and other kids believed were just obvious nonsense. That’s great training for a scientist and it transferred very well to artificial intelligence.

Dr. Hinton started a course “Neural Networks for machine learning” on Coursera, which introduces artificial neural networks and its application. The course is a good start to learn deep learning. However, the course was offered two years ago. Someone asked if  there are any changes on the course if Hinton redid it today.

Dr. Hinton said that he would split it into a basic course and an advanced course. In the advanced course, he would put a lot more about RNN’s especially for things like machine translation and also include reinforcement learning in the course.