A new model for ranking programming languages and predicting the growth of user adoption. Includes current language rankings and predictions.

The Redmonk Language Rankings have been an important tool for ranking the popularity of programming languages since the analysis (regressing Github repo count against Stack Overflow posts) was first done in 2010. The fact that the repo count and post count are correlated is a source of comfort but doesn’t provide any guidance on predicting future growth of languages.

We can build a regression of current users against would-be users to predict the growth of the various technologies included in the survey. 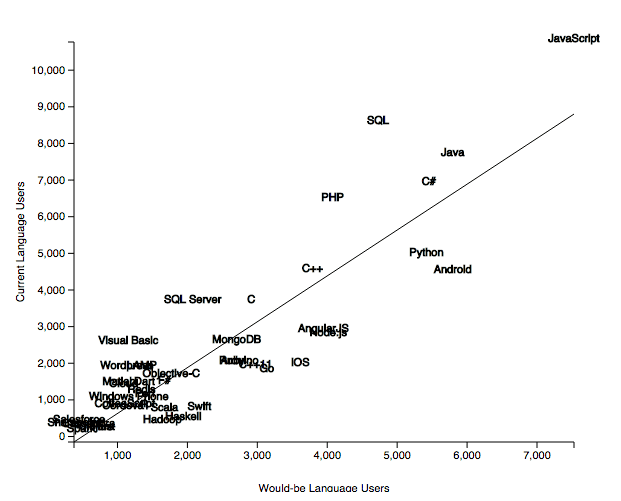 The regression line has an intuitive interpretation. It is the expected number of users given a level of interest in the technology. Therefore, we can reasonably expect technologies below the line to grow in adoption and technologies above the line to shrink (if we assume that interest drives adoption).

We can also rank the various technologies by their “steady-state” user base as predicted by the number of would-be users (listed below as “Rankings Plus”).

Until the results of the 2016 Stack Overflow Developer Survey are released, we will be unable to validate the accuracy of the predictions. With that said, here are the results and predictions from the 2015 survey.