Top viewed videos on artificial intelligence since 2016 include great talks and lecture series from MIT and Caltech, Google Tech Talks on AI. 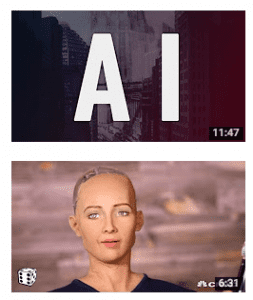 What are the most interesting recent videos on YouTube about artificial intelligence (AI)? We save your time filtering mega-hours of videos uploaded each day to select the most relevant and popular ones, by view-count as of 1 May 2017.  Enjoy our short-list ! The description is as appeared at YouTube.

This   video  shows  that GeForce GTX G-Assist takes advantage of cutting-edge NVIDIA artificial intelligence to bring you the next revolution in gaming.

2.  Daddy's Car: a song composed by Artificial Intelligence - in the style of the Beatles (7 months ago, 1.55M  views)

This is a video for the first-ever entire songs composed by Artificial Intelligence: "Daddy's Car" and "Mister Shadow”, created by scientists at SONY CSL Research Lab. The researchers have developed FlowMachines, a system that learns music styles from a huge database of songs. Exploiting unique combinations of style transfer, optimisation and interaction techniques, FlowMachines composes novel songs in many styles.   The two songs are excerpts of albums composed by Artificial Intelligence to be released in 2017.

This video provided by ColdFusion. It includes animations of Why AlphaGo is NOT an "Expert System”;  “Inside DeepMind” Nature video; and “AlphaGo and the future of Artificial Intelligence” BBC Newsnight.

This video is about the present, the distant- and not-so-distant future of AI. It was uploaded by LEMMiNO. It features  music created using the Jukedeck AI.

5. Most Advanced A.I. Robot Admits It Wants to Destroy Humans After Glitch During TV Interview (1 year ago, 913K views)

This video features about Sofia, the world's most advanced AI humanoid robot. During an interview with CNBC the robot   admitted “she” wants to destroy humans. While many are laughing off the statement, the reality is that the world's top scientists are now warning that creating an artificial intelligent being may likely be the biggest mistake humans have ever made. Elon Musk, Steve Wozniak, Stephen Hawking, Bill Gates, and others have all recently expressed serious concerns about the future of A.I.

This is a video podcast by TEDTalks.  It provides a tour of the Augmented Age with futurist Maurice Conti and preview a time when robots and humans will work side-by-side to accomplish things neither could do alone.

This video includes a question of “can a neural network learn to recognise doodles?" and shows how it does with a drawing and help teach it, just by playing.

This is video of a project using a Neural Network and Genetic Algorithm to teach Google's dinosaur from Chrome to jump cactus without dying easily.

This is TED talk on warning of  super-intelligent AI by neuroscientist and philosopher Sam Harris. We're going to build superhuman machines, says Harris, but we haven't yet grappled with the problems associated with creating something that may treat us the way we treat ants.

10. Are We Approaching Robotic Consciousnesses? (1 year ago, 698K views)

The field of artificial intelligence and robotics has experienced the first scientifically provable self aware robot. This is worlds worst nightmare... or is it? In this video you'll learn all about how this was achieved, what the real implications of what went down, and then we'll answer some further questions. 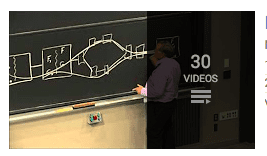 This  series of lectures provided by MIT OpenCourseWare. It includes   “Introduction and Scope of AI”, “Reasoning: Goal Trees and Problem Solving”.