Why Does Deep Learning Not Have a Local Minimum?

"As I understand, the chance of having a derivative zero in each of the thousands of direction is low. Is there some other reason besides this?"

Editor's note: This post originally appeared as an answer to a Quora question, which also included the following:

"As I understand, the chance of having a derivative zero in each of the thousands of direction is low. Is there some other reason besides this?"

Yes, there is a ‘theoretical justification’, and has taken a couple decades to flush it out.

I will first point out, however, it has been observed in practice. This was pointed out by LeCun in his early work on LeNet, and is actually discussed in the ‘orange book’, “Pattern Classification” by David G. Stork, Peter E. Hart, and Richard O. Duda. 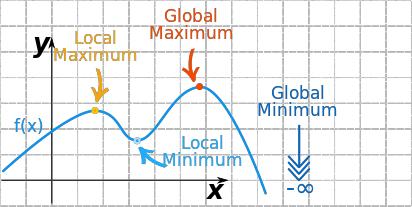 Source: Maxima and Minima of Functions.

The problem has been addressed in condensed matter physics 20 years ago in the study of spin glasses.

The basic program was first developed by Parisi, in an approximate, non-rigorous form:

On the stationary points of the TAP free energy

and then, later, proven exact using methods from Random Matrix Theory. It is this result that LeCun is talking about:

I will outline Parisi’s general approach:

He studied a specific kind of random Hamiltonian — a mean field spin glass called the p-spin spherical spin glass. He then:

What is usually never explained is why in the world this is an important problem in the study of spin glasses and why the p-spin-spherical spin glass is the right object to study, apart from it being a solved model, albeit with a lot of hard assumptions, that Deep Learning researchers can draw upon. Additionally, in deep learning, there is no distinction between the T=0 Energy Landscape and the T>0 Free Energy Landscape, even though traditionally methods like RBMs and VAEs are operate implicitly at T=1.

There are more recent results which attempt to address deep learning directly:

which further suggests the SGD solvers can not actually distinguish between saddle points and local minima because the Hessian is very ill-conditioned. This is confirmed by recent numerical work by LeCun, that shows Hessian does indeed have many zeros:

I personally don’t think this is the whole picture, and there has been extensive work on this class of problems by physical chemists such as Peter Wolynes. The issue is related to a very puzzling phenomena in the theory of super cooled glasses called the Adam-Gibbs phenomena and the related Entropy Crisis that occurs in real, structural glasses. The subject is very deep, but suffice it to say that the reason the p-spin spherical spin glass is interesting is that it is a simple spin-glass model, with a real energy landscape, that shows an entropy crisis. In fact, I conjecture that deep nets would also display an entropy crisis — i.e. they run out of configurational entropy — when they overtrained.

This Entropy crisis, resulting in overtraining, would look like a sharp valley because it has run out of configurational entropy, and is analogous to what LeCun is talking about in his work on Entropy-SGD. And it has very recently recently observed in RBMs:

These kinds of funneled landscapes are known from protein folding:

Why does Deep Learning work?

I address some these issues in my 2016 Summer Talk At MDDS at UC Berkeley.