A Quick Guide to Fake News Detection on Social Media

Fake news is an important issue on social media. This article provides an overview of fake news characterization and detection in Data Science and Machine Learning research.

Social media for news consumption is a double-edged sword. On the one hand, its low cost, easy access, and rapid dissemination of information allow users to consume and share the news. On the other hand, it can make viral “fake news”, i.e., low-quality news with intentionally false information. The quick spread of fake news has the potential for calamitous impacts on individuals and society. For example, the most popular fake news was more widely spread on Facebook than the most popular authentic mainstream news during the U.S. 2016 president election. Therefore, fake news detection on social media has attracted increasing attention from researchers to politicians.

Fake news detection on social media has unique characteristics and presents new challenges. First, fake news is intentionally written to mislead readers to believe false information, which makes it difficult to detect based on news content. Thus, we need to include auxiliary information, such as user social engagements on social media, to help differentiate it from the true news. Second, exploiting this auxiliary information is nontrivial in and of itself as users’ social engagements with fake news produce data that is big, incomplete, unstructured, and noisy. This quick guide is based on a recent survey [1] that presents issues of fake news detection on social media, state-of-the-art research findings, datasets, and further directions. Next, we will highlight the major perspectives for this survey.

Figure 1 is an overview of detecting fake news on social media, including two phases: characterization and detection. Fake news itself is not a new problem, and the media ecology has been changing over time from newsprint to radio/television, and recently online news and social media. The impact of fake news on traditional media can be described from the perspective of psychology and social theories.  For example, two major psychology factors make consumers naturally vulnerable to the fake news: (i) Naïve Realism: consumers tend to believe that their perceptions of reality are the only accurate views. (ii) Confirmation Bias: consumers prefer to receive information that confirms their existing views. As another example, social identity theory and normative influence theory describe that preference for social acceptance is essential to a person’s identity, making people choose “socially safe” option for consuming news, even the news being shared is fake news.

Fake news on social media has its unique characteristics. For example, malicious accounts can be easily and quickly created to boost the spread of fake news, such as social bots, cyborg users, or trolls. In addition, users are selectively exposed to certain types of news because of the way news feed appear on the homepage in social media. Therefore, users on social media tend to form groups containing like-minded people where they are likely to polarize their opinions, resulting in an echo chamber effect.

Even though online news can be collected from different sources, manually determining the veracity of news is a challenging task, usually requiring annotators with domain expertise who performs a careful analysis of claims and additional evidence, context, and reports from authoritative sources. Existing public datasets of fake news are rather limited due to these challenges. To facilitate the research for fake news detection, this survey [1] provides a usable dataset, named FakeNewsNet, which includes news content and social context features with reliable ground truth fake news labels. 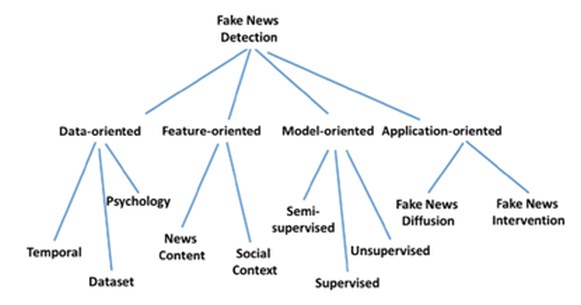