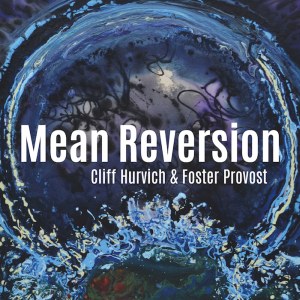 Mean Reversion is the collaboration of data scientist songwriters Foster Provost (that's me) and Cliff Hurvich, along with (three time Emmy-winning) producer Kevin Bents. I'm a machine learning guy who came from computer science, and Cliff is a well-known statistician. Sound like a perfect combination for a potentially high-impact contribution?

Gregory asked me to write something about Mean Reversion for the KDnuggets blog, and I agreed pretty quickly, thanks to my rather shameless desire to convince you to check out the music and see whether you might like to hear more. Or maybe become our biggest fan--we are recruiting!  But as you know, it's a very difficult market for attracting data scientists…

Attracting data scientists to Mean Reversion faces a classification problem. I've worked on classification from many angles for pretty much my whole career, and I still have not come up with a good solution in this case. How should we classify this music? I'm thinking of crowd-sourcing this problem to you, KDnuggets readers. Maybe you each can give a genre classification, and I can average your responses? (But, please, don't be mean.)

Here's why I'm having a classification problem. The first single, Blessing of My Birth, is sort-of flamenco rock. Well, maybe not rock. And maybe not flamenco. Flamenco-inspired jazz rock? Ugh. The lead track, Clarity, with its harmonica intro, suggests maybe that this could be a blues rock album, but then the song reverts to … Simon and Garfunkel meet REM? Then there is To The Light -- what's going on there? Medieval Rock? Really? And Dunes? A piano-harmonica flamenco duet? Tears on the Wing is like a song out of a musical. Maybe we need clustering and not classification. However, I hope you’ll nevertheless find a coherence to the work…

Cliff and I are scheduled to play live at the prestigious NY Songwriters Circle on February 4th. (If you are in NYC, and like original music, don't wait for February – you can check out the Circle at the Bitter End the first Monday of each month.)

Back to classification, NY Songwriters Circle CoFounder and 20+ year host, the amazing songwriter Tina Shafer introduced us at the Bitter End as, "…there's nothing out there like them," and hastened to add, "…And that's in a good way!"

And what about impact? We will have to wait to see whether the Mean Reversion album will become Cliff's or my most highly cited publication. However, it already does seem to have started to have scientific impact. Check out Luca Aiello's very nice article Science Reversions, reporting on the IEEE DSAA 2018 Conference and the ISI Foundation’s Science Crossroads meeting earlier this month.

So, check out Mean Reversion! As I told Gregory early on: in some places the work is definitely above average.