Which Face is Real?

Which Face Is Real?

Which Face is Real?

Which Face Is Real? was developed by Jevin West and Carl Bergstrom from the University of Washingtion as part of the Calling Bullshit Project. It acts as a sort of game that anyone can play. Visitors to the site have a choice of two images, one of which is real and the other of which is a fake generated by StyleGAN.

The project was implemented by Jevin and Carl as a course that will teach its students how to identify misinformation.

Our aim in this course is to teach you how to think critically about the data and models that constitute evidence in the social and natural sciences.

The world is awash in bullshit. Politicians are unconstrained by facts. Science is conducted by press release. Higher education rewards bullshit over analytic thought. Startup culture elevates bullshit to high art. Advertisers wink conspiratorially and invite us to join them in seeing through all the bullshit — and take advantage of our lowered guard to bombard us with bullshit of the second order. The majority of administrative activity, whether in private business or the public sphere, seems to be little more than a sophisticated exercise in the combinatorial reassembly of bullshit.

We're sick of it. It's time to do something, and as educators, one constructive thing we know how to do is to teach people. So, the aim of this course is to help students navigate the bullshit-rich modern environment by identifying bullshit, seeing through it, and combating it with effective analysis and argument.

How do you tell the Difference?

All the code for the StyleGAN have been open-sourced in the stylegan repository. It gives details on how you can run the styleGAN algorithm yourself.

However, there are a few barriers:

That type of compute and storage capacity is not common among individuals.

The time taken to properly train this algorithm is far beyond the patience of an everyday individual.

The science behind the app is thanks to a team at NVIDIA and their work on Generative Adversarial Networks. They created the StyleGAN. To learn a little more about this amazing technique, I have provided some resources and concise explanations below.

For those wanting a refresher on GAN's, this playlist of tutorials on GAN's by Ahlad Kumar is quite helpful.

Generative Adversarial Networks first made the rounds in 2014 as an extension of generative models via an adversarial process in which we simultaneously train two models:

The goal of GAN's is to generate artificial/fake samples that are indistinguishable from authentic/real samples. A common example is generating artificial images that are indistinguishable from real photos of people. The human visual processing system would not be able to differentiate these images so easily as the images will look like real people at first. We will later see how this happens and how we can distinguish a photo of a real person and a photo generated by an algorithm.

The algorithm behind this amazing app was the brainchild of Tero Karras, Samuli Laine and Timo Aila at NVIDIA and called it StyleGAN. The algorithm is based on earlier work by Ian Goodfellow and colleagues on General Adversarial Networks (GAN's). NVIDIA open sourced the code for their StyleGAN which uses GAN's in which two neural networks, one to generate indistinguishable artificial images while the other will attempt to distinguish between fake and real photographs.

But while we’ve learned to distrust user names and text more generally, pictures are different. You can't synthesize a picture out of nothing, we assume; a picture had to be of someone. Sure a scammer could appropriate someone else’s picture, but doing so is a risky strategy in a world with google reverse search and so forth. So we tend to trust pictures. A business profile with a picture obviously belongs to someone. A match on a dating site may turn out to be 10 pounds heavier or 10 years older than when a picture was taken, but if there’s a picture, the person obviously exists.

Generative models have a limitation in which it's hard to control the characteristics such as facial features from photographs. NVIDIA's StyleGAN is a fix to this limitation. The model allows the user to tune hyper-parameters that can control for the differences in the photographs.

StyleGAN solves the variability of photos by adding styles to images at each convolution layer. These styles represent different features of a photos of a human, such as facial features, background color, hair, wrinkles etc. The algorithm generates new images starting from a low resolution (4x4) to a higher resolution (1024x1024). The model generates two images A and B and then combines them by taking low-level features from A and rest from B. At each level, different features (styles) are used to generate an image:

Properties of the style-based generator 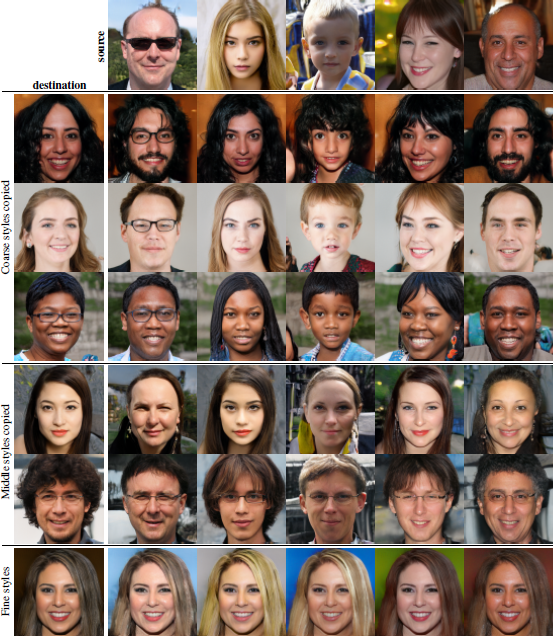 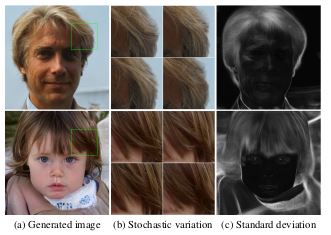 Separation of global effects from stochasticity