Lagrange multipliers with visualizations and code

In this story, we’re going to take an aerial tour of optimization with Lagrange multipliers. When do we need them? Whenever we have an optimization problem with constraints.

In this story, we’re going to take an aerial tour of optimization with Lagrange multipliers. When do we need them? Whenever we have an optimization problem with constraints. Here are some examples:

We can see that constrained optimization can solve many practical, real world problems arising in domains from logistics to finance. In the rest of the blog, we will start with vanilla optimization without constraints. Then, we will add equality constraints. Then, we will describe the solution to completely general constrained optimization problem with both equality and inequality constraints (the conditions are called KKT — Karush, Kuhn, Tucker conditions). Finally, we demonstrate the power of these conditions on some toy problems. Many people consider the book by Nocedal and Wright the bible of numerical optimization and we will roughly follow chapter 13, side-stepping rigorous proofs (which can always be read from the text) and focusing more on visual intuition.

At any point, for a one dimensional function, the derivative of the function points in a direction that increases it (at least for small steps). Meaning that if we have a function f(x) and the derivative f’(x) is positive, then increasing x will increase f(x) and decreasing it will decrease f(x). If we were minimizing f(x), we would just take a small step opposite to the sign of f’(x)to decrease f(x). What if we’re at a point where f’(x)=0? Then, we might have reached an optima of f(x) since there’s no where else to go.

If there are multiple variables (say x and y), we can have a derivative with each of them. If we take these two numbers and construct a 2-d vector from them, we get the gradient of the function. Now, moving along the direction of the gradient will increase the function while moving opposite to it will decrease it (for small steps).

Let’s take a concrete example so we can visualize what this looks like. Consider the function f(x,y) = x²+y². This is a paraboloid and minimized when x=0 and y=0. The derivatives with respect to x and y become 2x and 2y respectively. So, the gradient becomes the vector ∇f = [2x,2y]. We can see that this is zero only when x=0 and y=0. Otherwise, the gradient points in a direction where f(x,y) will increase. So, the direction opposite the gradient will decrease f(x,y). This is shown in the figure below. The pink curve is the objective function f(x,y) which is minimized at the green point (0,0). The purple arrows are the gradients, which point in the direction where f(x,y) will increase. So to decrease it, we move in the opposite direction until we reach the green point. 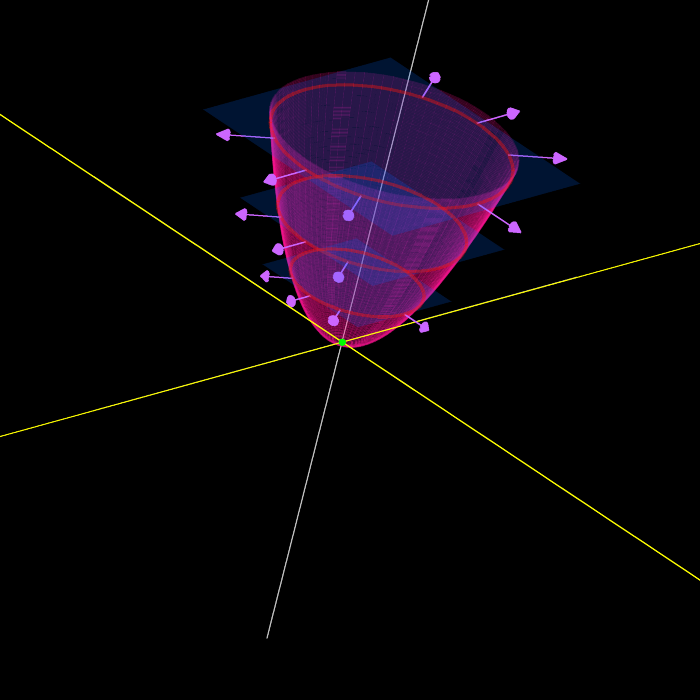 To summarize, when optimizing a function, f in an unconstrained optimization problem, a necessary (but not sufficient) condition to be at a local optima is:

It’s like when you’re at the top of a mountain (which would be a maxima). How do you know you’re at the top? No matter which direction you step along, you end up decreasing your altitude. So you’re definitely at an optima in your local neighborhood. Now, there might be another mountain right next to you which is even higher. So, you might not be at the global optima. In fact, if we consider the surface of the Earth as our domain (and height above sea level as our objective function), you’re at a local optima if you’re at the top of any old mountain (or building) but the global optima only if that mountain is Everest. In this article, we’re going to be content with finding a local optima. 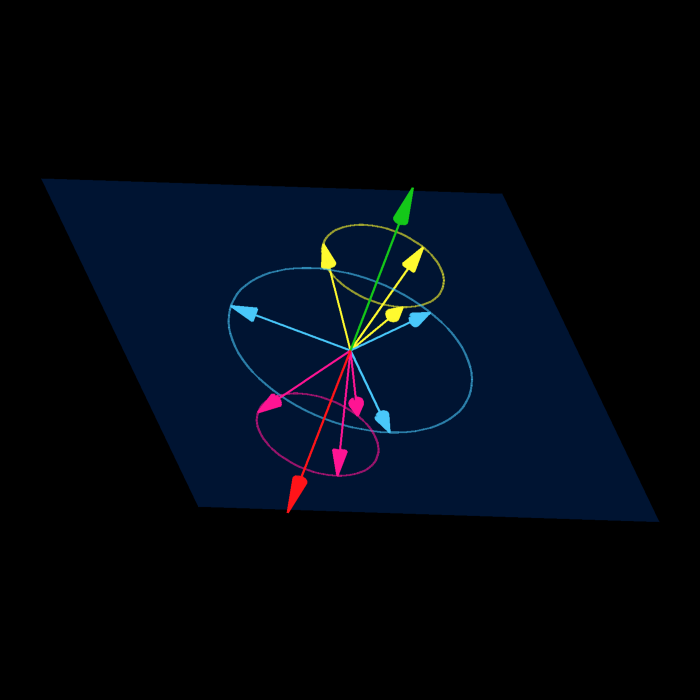 Fig 2: Vectors on opposite sides of a plane. See text for explanation. Made using https://github.com/ryu577/pyray

For un-constrained minimization, we looked for a point where the gradient was zero. This was because if it wasn’t, we could decrease the objective function by going opposite to the gradient.

The same idea can be extended to the case when we have equality constraints. Like before, we need to find a point where we can’t find any possible direction to move where the objective function decreases. For unconstrained optimization, this simply meant that no such direction exists. When we have a constraint, there is another possibility. What if a direction that decreases the objective function exists, but the constraints forbid us from taking any step along it.

Let’s say you want to maximize the amount of money in your bank account. One way to immediately boost your earnings is to sell a kidney. But you probably have a constraint saying you’re not going to lose a vital organ. So, even though an easy path to increasing your earnings exists, your constraint prevents you from accessing it.

This means that the presence of the equality constraint actually reduces the strictness of the condition on the gradient. While it needed to be zero for a local optima without the equality constraint, it’s now okay for it to be non-zero as long as moving in any direction that has a positive shadow along it causes us to violate the constraint. This can only happen when the plane of the constraint is perpendicular to the gradient (like the plane and green arrow in figure 2). 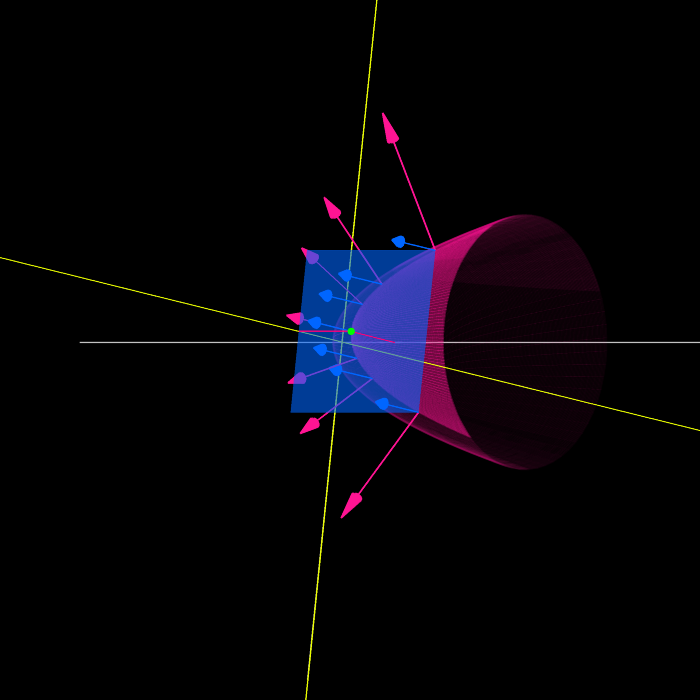 The λ above is called the Lagrange multiplier. So, we now have a concrete condition to check for when looking for the local optima of a constrained optimization problem.

Now, let’s change the equality constraint to inequality. This can be done in two ways with completely different results. We can either require:

c(x,y) = y-1 ≥0. In this case, the constraint allows for anything in front of the blue plane in figure 3. It is easy to see that the green point in figure 3 continues to be a local optima. Also, since the blue arrow representing the constraints gradient and the pink arrow representing the objective function’s gradient point in the same direction, we have:

The other possibility is, c(x,y) = y-1≤0. Now, the feasible region becomes everything behind the blue plane. The constraint gradients will flip. So, figure 3 will end up looking like this: 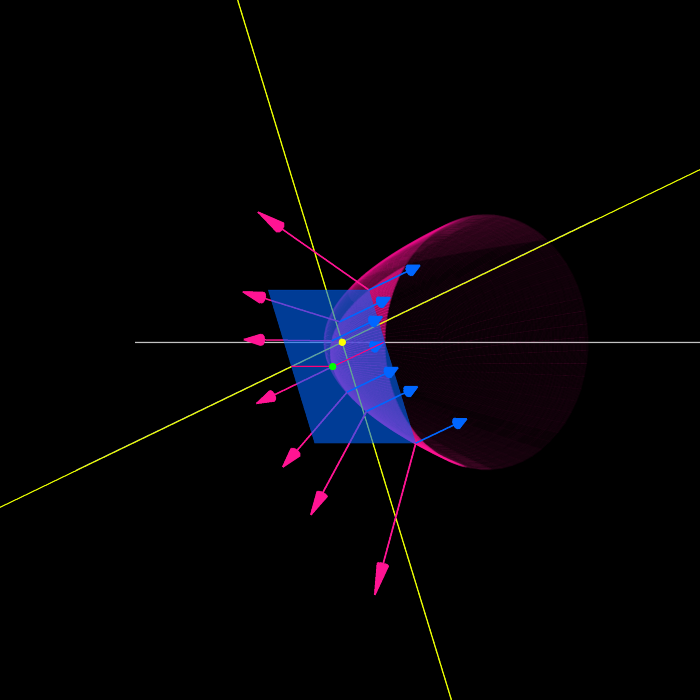 Fig 4: Flipping the sign of inequality constraint from figure 3.

So, it is clear that for an inequality constraint, the condition ∇f=λ ∇c indicates we’re at a local optima only when λ>0.

Putting all of this together, for a general optimization problem:

We get the full suite of conditions required to be at a local optima:

Where i ∈ Equality and j ∈ Inequality constraints.

Also note that for the two inequality constraint problems we considered, when we had y-1≥0, the green point in figure 3 was the solution. At this point, we were on the constraint plane (y-1=0). So, we actually had c(x)=0 and λ>0.

When we considered y-1≤0 on the other hand, the yellow point (x=0,y=0) in figure 4 became the local minima. This point was also the solution to the un-constrained problem. So, we simply had ∇f=0 here. Since the Lagrange condition requires ∇f = λ ∇c, we get λ ∇c = 0. Now, ∇c ≠0 at this point, which means we must have had: λ=0.

This means that if the constraint is active (c(x)=0), we should have λ≥0 while if it is not (c(x)≠ 0) we should have λ=0. So, one of them should be zero in all cases. This leads to the final condition (the complimentarity condition):

Equations (1) through (5) are called the KKT conditions. Note that we haven’t really provided rigorous proofs for them, just constructing them based on the simple example. For a proof, the reader should refer to chapter 13 of the book by Nocedal and Wright.

A lot of people when they see these five equations feel like the problem has become even more complicated. How do these equations actually help us solve constrained optimization problems. The best way to get a feel for this is to go through some concrete examples. In the next section, we take a sample problem to which we know the answer in advance and see how the KKT conditions help us correctly identify all local optima.

Notice that the constraint (x²+y²=1) implies we’re on the boundary of a circle with unit radius. So, we can say: x=cos(t), y=sin(t). The objective function then becomes: sin³(t)+cos³(t). If we plot this with t, we get the following graph: 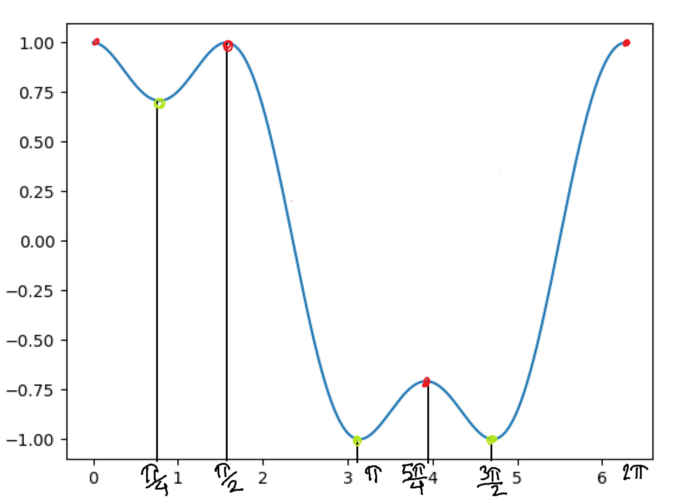 Fig 5: Objective function sin³(t)+cos³(t) plotted with t at the boundary of the constraint.

Equating the two components of the vectors on the two sides leads to the two equations:

Equation (2) simply requires that the equality constraint be satisfied:

And since there are no inequality constraints, we don’t need equations (3) to (6). Now, we can enter the three equations above into the symbolic equation solver the python library sympy provides.

This leads to the following result (all possible solutions to the system above with values of x, y and λ in that order):

Where the constraint implied we could only be on the boundary of the unit circle in the previous case, we can now be anywhere inside it. 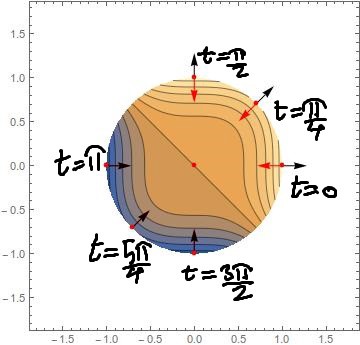 While the equality constrained problem was a one dimensional problem, this inequality constrained optimization problem is two dimensional. While there are only two ways to approach a point in one dimension (from left or right); there are an infinite number of ways to approach it in two dimensions. This means we need to beware of saddle points. These are points which qualify to be optima, but are not really optima since they are maxima when you approach them from one direction but minima when you approach them from another. The figure below shows what a saddle point looks like. 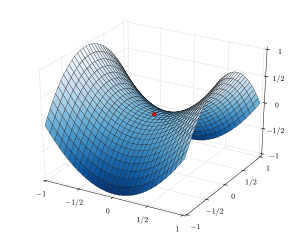 So, we need to re-evaluate all the points that were local minima or maxima in the case of the equality constraint and make sure none of them become saddle points.

Similarly we can argue that t=π and t=3π/2 are local minima no matter where we approach them from inside the feasible region.

Looking at t=π/4 however, we note from figure 5 that approaching it along the boundary makes it a local minima. However, approaching it from inside the disk (along the line joining the origin to this point for example) makes it a local maxima. So, it is overall neither a local maxima nor a local minima. Such a point is called a saddle point. Using similar arguments, t=5π/4 is also a saddle point.

Now, let’s see what the KKT conditions say for our problem. Plugging the objective function and constraints into the KKT equations (1) through (5) we get: 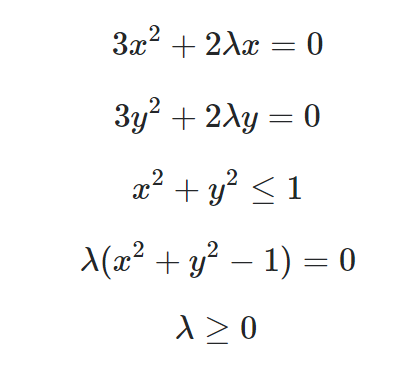 To leverage polynomial equation solvers, we need to convert these to a system of polynomial equations. The first two conditions (6-(a) and (b))are already equations. The third one, x²+y²≤1 (6-(c)) is an inequality. But we can convert it into an equality by introducing a slack variable, k; x²+y²+k²=1. The last equation, λ≥0 is similarly an inequality, but we can do away with it if we simply replace λ with λ². Now, we demonstrate how to enter these into the symbolic equation solving library python provides.

This produces the following result (the various solutions of the system above with variables x,y,λ,k in order):

Bio: Rohit Pandey is a Senior Data Scientist at LinkedIn