Upgrading your machine learning, AI, and Data Science skills requires practice. To practice, you need to develop models with a large amount of data. Finding good datasets to work with can be challenging, so this article discusses more than 20 great datasets along with machine learning project ideas for you to tackle today.

Scroll down to see 20+ machine learning and data science dataset and project ideas that you can use to practice and upgrade your skills today. 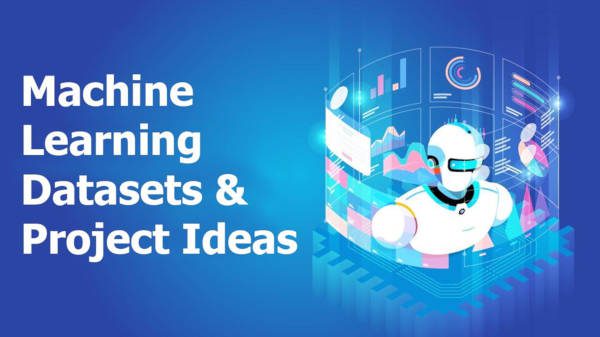 The Enron Dataset is popular in natural language processing. It has more than 500K emails of over 150 users. The size of the data is around 432Mb. Out of 150 users, most of the users are the senior management of Enron.

Machine Learning Project Idea: Using k-means clustering, you can build a model to detect fraudulent activities. K-means clustering is an unsupervised Machine learning algorithm. It separates the observations into k number of clusters based on the similar patterns in the data.

The dataset for a chatbot is a JSON file that has disparate tags like goodbye, greetings, pharmacy_search, hospital_search, etc. Every tag has a list of patterns that a user can ask, and the chatbot will respond according to that pattern. The dataset is perfect for understanding how chatbot data works.

Machine Learning Project Idea: You can build a chatbot or understand the working of a chatbot by twisting and expanding the data with your observations. To build a Chatbot of your own, you need to have a good knowledge of Natural language processing concepts.

Machine Learning Project Idea: You can build a CNN model that is great for analysing and extracting features from the image and generate a english sentence that describes the image that is called Caption.

Parkinson's is a disease that can cause a nervous system disorder and affects the movement. Parkinson dataset contains biomedical measurements, 195 records of people with 23 different attributes. This data is used to differentiate healthy people and people with Parkinson’s disease.

Machine Learning Project Idea: You can build a model that can be used to differentiate healthy people from people having Parkinson’s disease. The algorithm that is useful for this purpose is XGboost, which stands for extreme gradient boosting, and it is based on decision trees.

The iris dataset is a beginner-friendly dataset that has information about the flower petal and sepal sizes. This dataset has 3 classes with 50 instances in every class, so only contains 150 rows with 4 columns.

Machine Learning Project Idea: Classification is the task of separating items into their corresponding class. You can implement a machine learning classification or regression model on the dataset.

ImageNet is a large image database that is organized according to the wordnet hierarchy. It has over 100,000 phrases and an average of 1000 images per phrase. The size exceeds 150 GB. It is suitable for image recognition, face recognition, object detection, etc. It also hosts a challenging competition named ILSVRC for people to build more and more accurate models.

Machine Learning Project Idea: To implement image classification on this huge database and recognize objects. CNN model (Convolutional neural networks) are necessary for this project to get accurate results.

The Mall customers dataset holds the details about people visiting the mall. The dataset has an age, customer id, gender, annual income, and spending score. It gains insights from the data and divides the customers into different groups based on their behaviors.

Machine Learning Project Idea: Segment the customers based on their gender, age, interest. It is useful in customized marketing. Customer segmentation is an important practice of dividing customers based on individual groups that are similar.

Google trends data can be used to examine and analyze the data visually. You can also download the dataset into CSV files with a simple click. We can find out what’s trending and what people are searching for.

This is a popular dataset used in pattern recognition. It contains information about the different houses in Boston based on crime rate, tax, number of rooms, etc. It has 506 rows and 14 different variables in columns. You can use this dataset to predict house prices.

Machine Learning Project Idea: Predict the housing prices of a new house using linear regression. Linear regression is used to predict values of unknown input when the data has some linear relationship between input and output variables.

The dataset has information about 4.5 million Uber pickups in New York City from April 2014 to September 2014 and 14 million more from January 2015 to June 2015. Users can perform data analysis and gather insights from the data.

This is a portal to a collection of rich datasets that were used in lab research projects at UCSD. It contains various datasets from popular websites like Goodreads book reviews, Amazon product reviews, bartending data, data from social media, etc that are used in building a recommender system.

Classifying emails as spam or non-spam is a very common and useful task. The dataset contains 4601 emails and 57 meta-information about the emails. You can build models to filter out the spam.

Machine Learning Project Idea: You can build a model that can identify your emails as spam or non-spam.

The GTSRB dataset contains around 50,000 images of traffic signs belonging to 43 different classes and contains information on the bounding box of each sign. The dataset is used for multiclass classification.

This is an open-source dataset for Computer Vision projects. It contains high-quality pixel-level annotations of video sequences taken in 50 different city streets. The dataset is useful in semantic segmentation and training deep neural networks to understand the urban scene.

Machine Learning Project Idea: To perform image segmentation and detect different objects from a video on the road. Image segmentation is the process of digitally partitioning an image into various different categories like cars, buses, people, trees, roads, etc.

There are three different datasets for Kinetics: Kinetics 400, Kinetics 600, and Kinetics 700 dataset. This is a large scale dataset that contains a URL link to around 6.5 million high-quality videos.

The IMDB-Wiki dataset is one of the largest open-source datasets for face images with labeled gender and age. The images are collected from IMDB and Wikipedia. It has 5 million-plus labeled images.

The dataset contains a CSV file that has 865 color names with their corresponding RGB (red, green, and blue) values of the color. It also has the hexadecimal value of the color.

Machine Learning Project Idea: The color dataset can use used to make a color detection app in which we can have an interface to pick a color from the image and the app will display the name of the color.

Machine Learning Project Idea: We can build a sound classification system to detect the type of urban sound playing in the background. This will help you get started with audio data and understand how to work with unstructured data.

This dataset contains a large number of English speeches that are derived from the LibriVox project. It has 1000 hours of English-read speech in various accents. It is used for speech recognition projects.

Machine Learning Project Idea: To build a model that can classify breast cancer. You build an image classification model with Convolutional neural networks.

The youtube 8M dataset is a large scale labeled video dataset that has 6.1 million Youtube video ids, 350,000 hours of video, 2.6 billion audio/visual features, 3862 classes, and 3 avg labels per video. It is used for video classification purposes.

Machine Learning Project Idea: Video classification can be done by using the dataset, and the model can describe what video is about. A video takes a series of inputs to classify in which category the video belongs.

In this article, we saw more than 20 machine learning datasets that you can use to practice machine learning or data science. Creating a dataset on your own is expensive, so we can use other people’s datasets to get our work done. But we should read the documents of the dataset carefully because some datasets are free, while for some datasets, you have to give credit to the owner as stated by them.

Bio: Shivashish Thaku is an Analyst and technical content writer. He is a technology freak who loves to write about the latest cutting edge technologies that are transforming the world. He is also a sports fan who loves to play and watch football.