What is Simpson’s Paradox and How to Automatically Detect it

Looking at data one way can tell one story, but sometimes looking at it another way will tell the opposite story. Understanding this paradox and why it happens is essential, and new tools are available to help automatically detect this tricky issue in your datasets.

When we want to study relationships in data, we can plot, cross-tabulate, or model that data. When we do this, we might come across cases where the relationships we see from two different views of a single dataset lead us to opposing conclusions. These are cases of Simpson’s Paradox.

Finding these cases can help us understand our data better and discover interesting relationships. This article gives some examples of where these cases happen, discusses how and why they happen, and suggests ways to automatically detect these situations in your own data.

What is Simpson’s Paradox?

Simpson’s Paradox refers to a situation where you believe you understand the direction of a relationship between two variables, but when you consider an additional variable, that direction appears to reverse.

Why does Simpson’s Paradox happen?

Simpson’s Paradox happens because disaggregation of the data (e.g., splitting it into subgroups) can cause certain subgroups to have an imbalanced representation compared to other subgroups. This might be due to the relationship between the variables, or simply due to the way that the data has been partitioned into subgroups.

A famous example of Simpson’s Paradox appears in the admissions data for graduate school at UC Berkeley in 1973 [source]. In this example, when looking at the graduate admissions data overall, it appeared that men were more likely to be admitted than women (gender discrimination!), but when looking at the data for each department individually, men were less likely to be admitted than women in most of the departments. 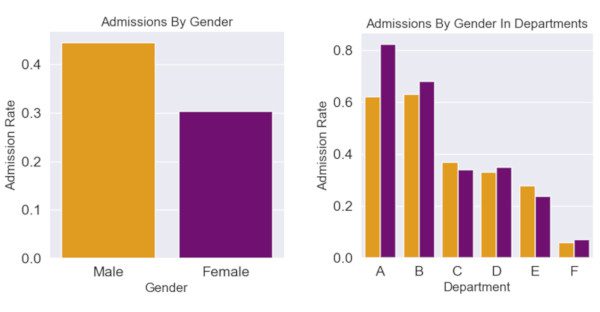 This leads us to ask: which view is the correct view? Do men or women have a higher acceptance rate? Is there a gender bias in admissions at this university?

In this case, it seems most reasonable to conclude that looking at the admissions rates by department makes more sense, and the disaggregated view is correct. 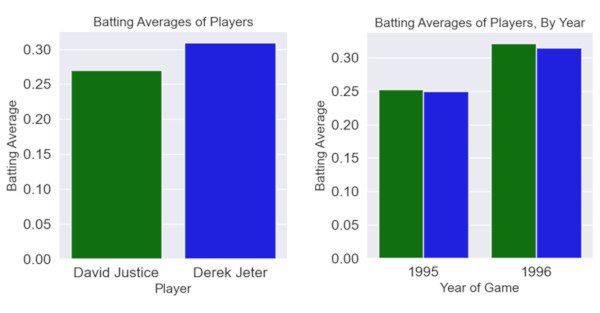 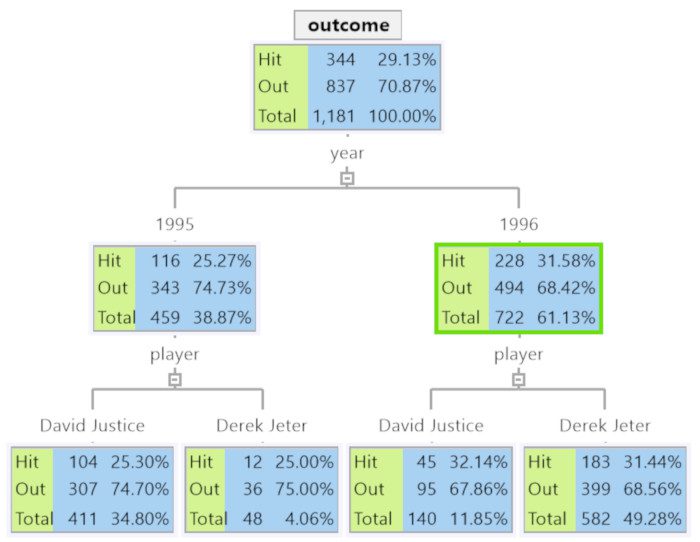 Figure 1: Knowledge Studio Decision Tree displaying the imbalanced number of at-bats by each player in 1995 and 1996.

With these two examples, it’s clear why Simpson’s Paradox can be an issue. It’s hard to draw conclusions from data when the data tells us two opposing stories at the same time. One might be tempted to think that the disaggregated view is always better since it contains more information, but it’s possible that disaggregating on an additional variable provides an unnecessary or confusing perspective.

What to do about Simpson’s Paradox

Without enough domain knowledge, it’s hard to know which view of the relationship between two variables makes more sense – the one with or without the third variable.

But before we think about how to deal with Simpson’s Paradox, we need to find a way to efficiently detect it in a dataset. As mentioned earlier, it’s possible to find an instance of Simpson’s Paradox (a “Simpson’s Pair”) simply by disaggregating a contingency table or a plot of data points and studying the results. However, there are other ways we can find Simpson’s Pairs using models, e.g.:

There are benefits to both, however, this can get difficult very quickly, especially when working with big datasets. It’s hard to know which variables in the dataset may reverse the relationship between two other variables, and it can be hard to check all possible pairs of variables manually. Imagine we have a dataset with only 20 variables: we’d need to check almost 400 pairs to be sure to find all cases of Simpson’s Paradox.

There are also further challenges to consider, even if we have searched for (and found) all possible Simpson's Pairs. These challenges relate to interpretation, for example:

These last challenges don’t disappear when attempting to automatically detect Simpson’s Paradox, but by being forced to make decisions up front, we can at least handle them in a systematic and consistent way.

Luckily, some tools have already been developed to deal with Simpson’s Paradox in datasets:

How We Automatically Detect Simpson’s Paradox

We wrote our own function to automatically find Simpson’s pairs in a dataset. There are two versions: one using Decision Trees (which can currently only be used inside of Altair’s Knowledge Studio software), and one using Regression models, which works in Python and is available for download.

Simpson's Paradox is a tricky issue, but a good analyst or data scientist can handle it with the right tools and knowledge. We hope our new work can help others deal with this issue in an easier and more efficient manner.