For speeding up the calculation of the Levenshtein distance, this tutorial works on calculating using a vector rather than a matrix, which saves a lot of time. We’ll be coding in Java for this implementation. 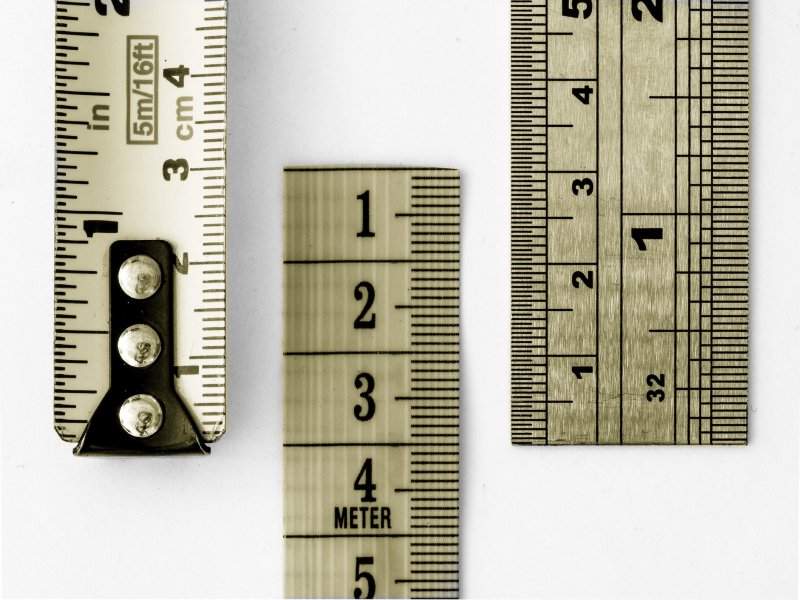 Photo by William Warby on Unsplash

The Levenshtein distance is a text similarity metric that measures the distance between 2 words. It has a number of applications, including text autocompletion and autocorrection.

For either of these use cases, the word entered by a user is compared to words in a dictionary to find the closest match, at which point a suggestion(s) is made. The dictionary may contain thousands of words, and thus the response of the application for comparing 2 words will likely take a few milliseconds.

The Levenshtein distance is usually calculated by preparing a matrix of size (M+1)x(N+1)—where M and N are the lengths of the 2 words—and looping through said matrix using 2 for loops, performing some calculations within each iteration. This makes it time-consuming to calculate the distance between a word and a dictionary of thousands of words.

For speeding up the calculation of the Levenshtein distance, this tutorial works on calculating using a vector rather than a matrix, which saves a lot of time. We’ll be coding in Java for this implementation.

The sections covered in this tutorial are as follows:

Why use a vector rather than a matrix?

First, let’s quickly summarize how the calculation of the distance works for a matrix before working with a vector.

For 2 words, such as nice and niace, a matrix of size 5x6 is created, as shown in the next figure. Note that the labels in blue are not part of the matrix and are just added for clarity. You can freely decide to make a given word represent rows or columns. In this example, the characters of the word nice represent the rows. 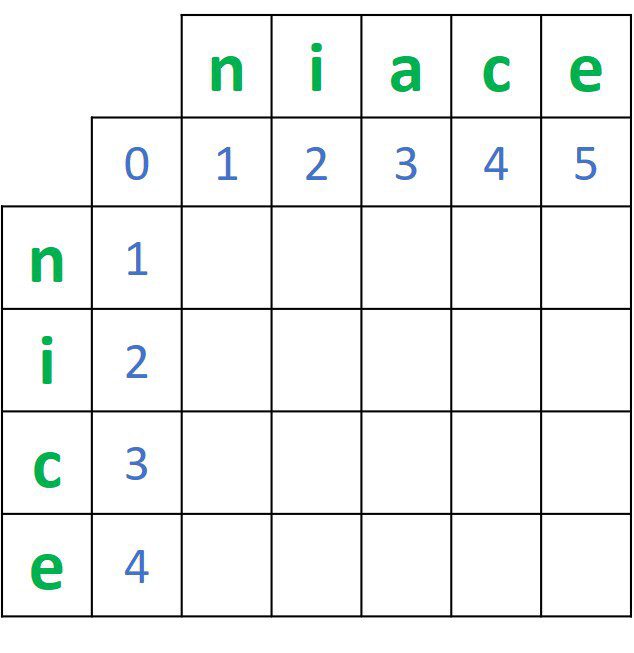 Note that there are an additional row and column in the matrix that doesn’t correspond to any character in the 2 words. They are placed there to help calculate the distance.

The first row and column of the matrix are initialized by values starting at 0 and incrementing by 1 for each character. For example, the first row has values that start from 0 to 5. Note that the final distance between the 2 words is located at the bottom-right corner, but to reach it, we have to calculate the distances between all subsets in the 2 words.

Based on the matrix in the previous figure, the first character from the word nice is n. It will be compared to all subsets of the second word niace —even with the subset that has zero characters {_, n, ni, nia, niac, niace}.

Let's see how the distance between these 2 subsets is calculated. For a given cell at the location (i,j) corresponding to the intersection between the 2 characters A and B, we compare the values at the 3 locations (i,j-1), (i-1,j), and (i-1,j-1). If the 2 characters are identical, then the value at location (i,j) equals the minimum of the mentioned 3 locations. Otherwise, it will be equal to the minimum value at those 3 locations after adding 1.

The previous discussion could be represented as a matrix of 4 values, where there are 3 known values and 1 missing value, as given in the next figure. 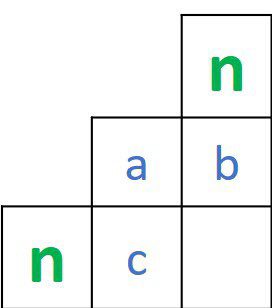 Such a missing value is calculated by comparing the 3 values according to the following:

By applying that, the next figure gives the values in the second row of the matrix. 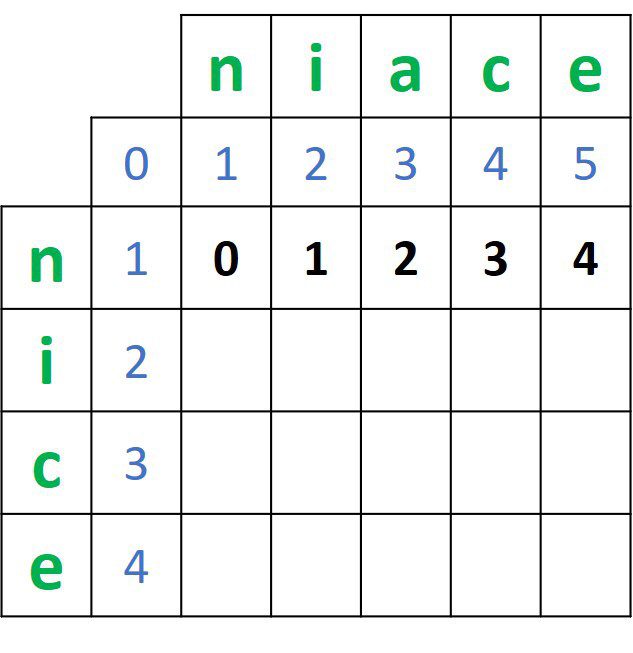 In other words, we are only in need of a single row of known values for calculating the distances for a row of unknown values—no need for an entire matrix. Using a matrix to calculate the distance saves all rows in cases where each row is used only once.

To solve that issue, we won’t use a matrix at all, but instead, a vector.

Did you know: Machine learning isn’t just happening on servers and in the cloud. It’s also being deployed to the edge. Fritz AI has the developer tools to make this transition possible.

The zeros in that vector will be replaced by the distances between all the subsets in the selected word nice, and the first subset in the other word niace, which is just the character n. How do we calculate such distances?

Assuming that we’re calculating the distance for the element with index i and the distances vector is named distanceVector, then the 2 values are as follows:

The returned distance is the minimum of these 2 values:

Here’s the vector after calculating the distances between all subsets of the word nice and the first subset of the second word niace.

Note that i refers to the index of the element from the first word.

Now that we’ve clarified how the Levenshtein distance works, both with matrices and vectors, the next section implements the distance via a vector in Java.

The first thing to do is to create 2 String variables holding the 2 words, in addition to initializing the distance vector. Here is how this is done in Java:

After the vector is created, it will be initialized by zeros by default. The next step is to calculate the distances between all subsets in the first word nice, and the first subset in the second word niace using a for loop.

The next and final step is to calculate the distances between all subsets in the first word and the remaining subsets in the second word, according to the following code:

The final distance between the 2 words is saved into both the variable dist and the last element of the vector distances.

Here is a complete class named LevenshteinDistance, in which a method named levenshtein() holds the code for calculating the distance. The method accepts the 2 words as arguments and returns the distance. Inside the main() method, an instance of the method is created to calculate the distance between the 2 words nice and niace.

The print output from the previous code is:

Here is another example for calculating the distance, using two different words:

The result is as follows:

This tutorial discussed calculating the Levenshtein distance using just a vector to return the distance between words. Being optimized to use just a vector, it could be applied for applications running on mobile devices for automatic completion and correction of words as user type searches or other textual inputs.