Instead, run your Jupyter Notebook as a stand alone web app. 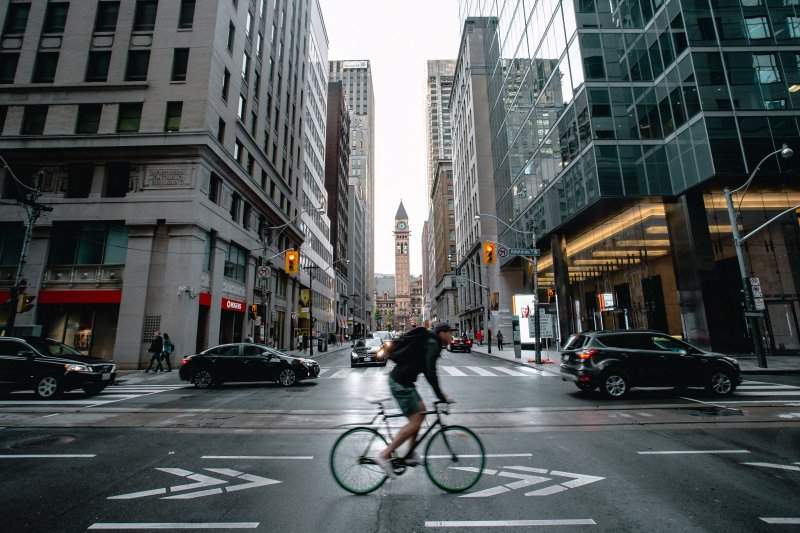 Photo taken by Justin Jairam from @jusspreme (with permission)

Jupyter Notebook provides a great platform to produce human-readable documents containing code, equations, analysis, and their descriptions. Some even consider it a powerful development when combining it with NBDev. For such an integral tool, the out of the box start up is not the best. Each use requires starting the Jupyter web application from the command line and entering your token or password. The entire web application relies on that terminal window being open. Some might “daemonize” the process and then use nohup to detach it from their terminal, but that’s not the most elegant and maintainable solution.

Lucky for us, Jupyter has already come up with a solution to this problem by coming out with an extension of Jupyter Notebooks that runs as a sustainable web application and has built-in user authentication. To add a cherry on top, it can be managed and sustained through Docker allowing for isolated development environments.

By the end of this post we will leverage the power of JupyterHub to access a Jupyter Notebook instance which can be accessed without a terminal, from multiple devices within your network, and a more user friendly authentication method.

A basic knowledge of Docker and the command line would be beneficial in setting this up.

I recommend doing this on the most powerful device you have and one that is turned on for most of the day, preferably all day. One of the benefits of this setup is that you will be able to use Jupyter Notebook from any device on your network, but have all the computation happen on the device we configure.

What is Jupyter Hub

JupyterHub has pre-built Docker images that we can utilize to spawn a single notebook on a whim, with little to no overhead in technical complexity. We are going to use the combination of Docker and JupyterHub to access Jupyter Notebooks from anytime, anywhere, at the same URL.

The architecture of our JupyterHub server will consist of 2 services: JupyterHub and JupyterLab. JupyterHub will be the entry point and will spawn JupyterLab instances for any user. Each of these services will exist as a Docker container on the host. 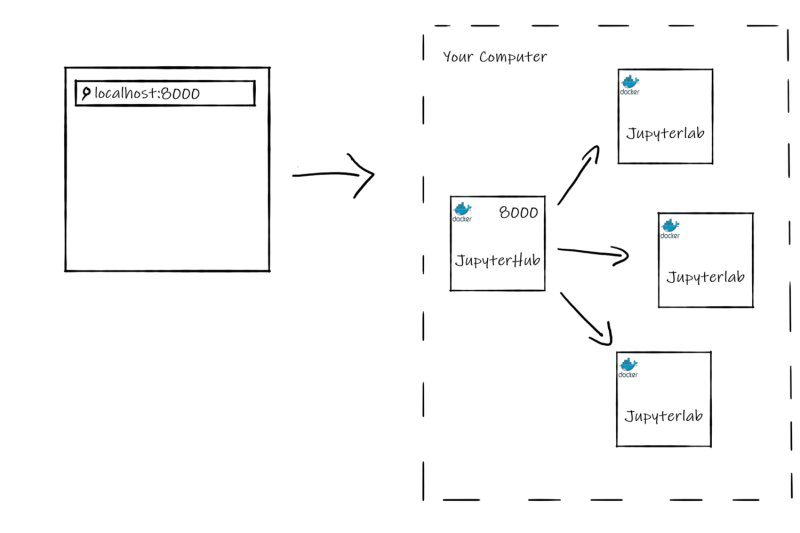 To build our at-home JupyterHub server we will use the pre-built Docker images of JupyterHub & JupyterLab.

The JupyterHub Docker image is simple.

We use the pre-built JupyterHub Docker Image and add our own configuration file to stop idle servers, cull_idle_servers.py. Lastly, we install additional packages to spawn JupyterLab instances via Docker.

To bring everything together, let’s create a docker-compose.yml file to define our deployments and configuration.

DOCKER_NETWORK_NAME is the name of the Docker network used by the services. This network gets an automatic name from Docker Compose, but the Hub needs to know this name to connect the Jupyter Notebook servers to it. To control the network name we use a little hack: we pass an environment variable COMPOSE_PROJECT_NAME to Docker Compose, and the network name is obtained by appending _default to it.

Create a file called .env in the same directory as the docker-compose.yml file and add the following contents:

Since this is our home setup, we want to be able to stop idle instances to preserve memory on our machine. JupyterHub has services that can run along side it and one of them being jupyterhub-idle-culler. This service stops any instances that are idle for a prolonged duration.

To add this servive, create a new file called cull_idle_servers.py and copy the contents of jupyterhub-idle-culler project into it.

Ensure `cull_idle_servers.py` is in the same folder as the Dockerfile.

To find out more about JupyterHub services, check out their official documentation on them.

To finish off, we need to define configuration options such, volume mounts, Docker images, services, authentication, etc. for our JupyterHub instance.

Below is a simple jupyterhub_config.py configuration file I use.

Remove this line if you do not wish to mount your home directory and do not forget to change sidhu to your user name.

To start the server, simply run docker-compose up -d, navigate to localhost:8000 in your browser and you should be able to see the JupyterHub landing page.

To access it on other devices on your network such asva laptop, an iPad, etc, identify the IP of the host machine by running ifconfig on Unix machines & ipconfig on Windows.

From your other device, navigate to the IP you found on port 8000: http://IP:8000 and you should see the JupyterHub landing page!

To make use of this, we will have to create a user on the JupyterHub Docker container. There are other ways of doing this such as having a script placed on the container and executed at container start up but we will do it manually as an exercise. If you tear down or rebuild the container you will have to recreate users.

I do not recommend hard coding user credentials into any script or Dockerfile.

2) “SSH” into the container: docker exec -it $YOUR_CONTAINER_ID bash
3) Create a user and follow the terminal prompts to create a password: useradd $YOUR_USERNAME
4) Sign in with the credentials and you’re all set!

You now have a ready to go Jupyter Notebook server that can be accessed from any device, in the palm of your hands! Happy Coding!

I welcome any and all feedback about any of my posts and tutorials. You can message me on twitter or e-mail me at sidhuashton@gmail.com.

Bio: Ashton Sidhu (@ashtonasidhu) is a Data Scientist focused in the cyber security area. He is an engineer at heart and have both a Bachelors of Applied Science and Engineering as well as a Master’s of Engineering focused in Information Systems as well as Predictive and Perscriptive analytics.