Here are the Most Popular Python IDEs/Editors

Jupyter Notebook continues to lead as the most popular Python IDE, but its share has declined since the last poll. The top 4 contenders have remained the same, but only one has significantly improved its share. We also examine the breakdown by employment and region.

This poll received over 2,500 responses. We allowed up to 3 selections, so that is why shares sum to more than 100%. The average respondent used 1.7 IDEs.

We also compared the share each IDE received to the share in a similar 2018 poll The most popular Python IDEs / Editors (which got over 1900 responses).

Here are the top IDEs which received over 2% share this year. In 2018 we did not give a separate option of JupyterLab so for proper comparison we combined the answers of Jupyter Notebook (which received 42%) and JupyterLab (14%) into one entry - Jupyter, which had 51% share. Not 56%, because 5% of respondents used both. 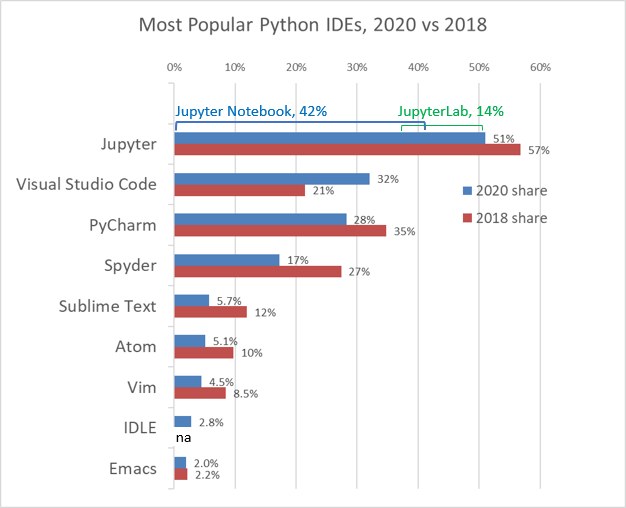 Other IDEs, not shown in Fig. 1 because they < 2% share, were Comparing with 2018 poll, we see that VS Code share has grown dramatically, from 21% to 32%, while almost every other IDE share has declined.

So, if you are only using Jupyter Notebook, check also VS Code!

We also looked at whether the popular IDEs differ by employment type for top 3 categories - see Fig. 2. 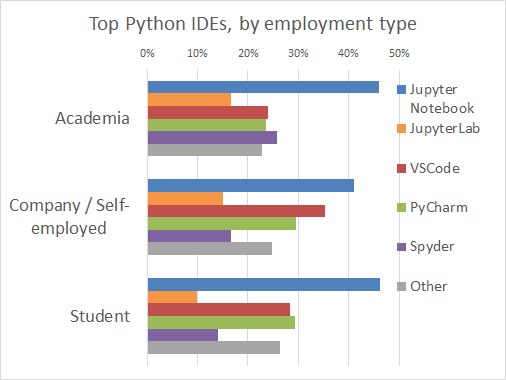 We see that Jupyter Notebook is the leader for all employment types. VSCode is in 2nd place for Company / Self-employed group, while PyCharm barely beats VSCode for 2nd place among students. Spyder takes 2nd place in Academia. JupyterLab share is around 15% for Academia and Industry, and only 10% for students. 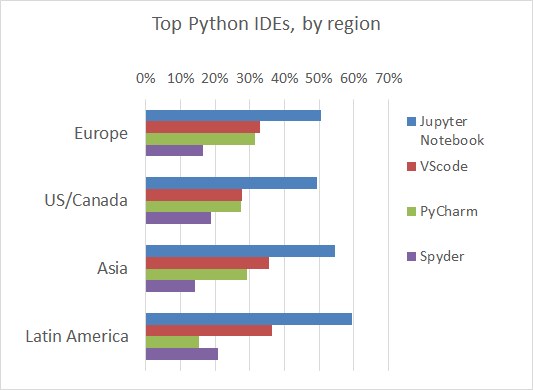 We see that Jupyter Notebook leads everywhere, with VSCode in strong 2nd place. PyCharm is in 3rd place everywhere, except Latin America, where Spyder is in third place ahead of PyCharm.