Here are the most popular Python IDEs / Editors

We report on the most popular IDE and Editors, based on our poll. Jupyter is the favorite across all regions and employment types, but there is competition for no. 2 and no. 3 spots.

comments
Our latest poll was motivated by a recent KDnuggets blog What is the Best Python IDE for Data Science? which received a lot of views and comments, as did my LinkedIn post of that blog.

To help resolve the debate about which are the most popular Python IDEs or editors, we asked 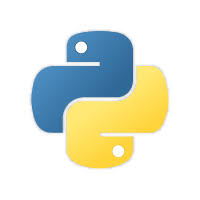 What Python Editors or IDEs you used the most in 2018?

Over 1900 people took part in this poll, and the results are in Fig. 1 below. The top 5 choices were 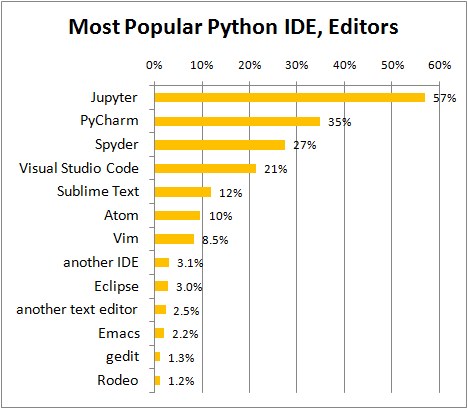 We also asked about employment, and the breakdown was Does the distribution of IDE/Editors differ by employment? 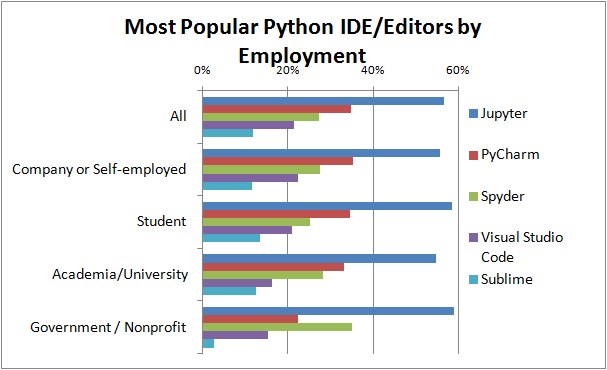 Fig. 2 shows the top 5 choices by employment, and the relative proportions are surprisingly similar for Company/Self-employed, Students, and Academia. Jupyter, as befits a god, is the clear leader across all employment types, with surprisingly uniform share - between 56 and 59% in every case.

The only major difference we see is in the 2nd choice for people in Government/non-profits is Spyder and not PyCharm as for others.

The Data Science Python preferences seems to be globally universal - perhas a good sign of rapid global distribution of advances in both Python and Data Science.

We next look at a breakdown of voters by region, which was

Are the preferences the same across regions? 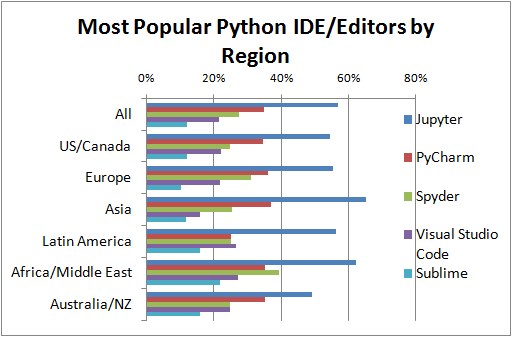 Two smaller (in terms of participants, not geography) regions differ. Latin America has VS Code as the 2nd most popular Python editor, and Africa Middle East has Spyder as the 2nd option.

Finally, are there significant associations between different Python IDE / Editors?

In this poll about 43% of respondents made only one choice, 30% made two choices, and 27% made three choices.

I used the same methodology of using Lift as measure of association as in my blog Emerging Ecosystem: Data Science and Machine Learning Software, Analyzed

Fig. 4: Most Popular Python IDE, Editors by Region
Green - positive association, red negative.
Only lifts greater than 10% or smaller than -10% are shown.

We don't see any clear positive associations, except between Jupyter and Atom. Spyder, PyCharm, and Visual Studio Code "repel" each other as additions to Jupyter.